Obesity is a worldwide health problem that increases morbidity and mortality.1 In the United States, the prevalence of obesity is roughly 35% in adults.2 As the prevalence of obesity increases, one can expect the prevalence of surgery for obese patients to also increase. In pelvic surgeries (i.e., urologic, gynecologic, distal colorectal surgery), robotic assistance conveys certain advantages. For patients with increased subcutaneous tissue, robotic surgery can decrease the physical demand and strain on the surgeon while increasing precision and mobility with the use of wristed surgical instruments.3 In order to optimize surgical view of the pelvic organs, steep Trendelenburg positioning is utilized in most robotic pelvic procedures. The steep Trendelenburg position, which is defined as 30–40 degrees in the head down position, is associated with risks including hemodynamic changes, altered pulmonary function, airway edema, increased intracranial and intraocular pressure, mechanical sliding, and nerve injury (Table 1).4 Implementing strategies for risk reduction in the operating room is imperative in this patient population (Table 2).

Robotic assisted laparoscopic pelvic procedures require pneumoperitoneum in addition to steep Trendelenburg positioning for optimal surgical visualization. Insufflation of the abdomen with carbon dioxide while in steep Trendelenburg increases systemic vascular resistance (SVR) and mean arterial pressure (MAP) likely secondary to direct compression of the abdominal arteries. Although cardiac output (CO) is usually maintained during the procedure, small decreases may be observed.5,6 Regional changes in blood flow may occur with insufflation of the abdomen. Mesenteric flow may decrease secondary to increased intraabdominal pressure. Central venous pressure (CVP) may initially be elevated upon initiating steep Trendelenburg position due to increased intrathoracic pressure secondary to pneumoperitoneum as well as cephalad pressure from the intraabdominal contents on the diaphragm.5 Therefore, under these conditions, CVP may not accurately reflect a patient’s intravascular volume status. At a constant insufflation pressure, despite the increases in intraabdominal and intrathoracic pressures, venous return appears to be maintained secondary to the effects of steep Trendelenburg.5

Obesity is associated with various changes in pulmonary physiology. Due to increased intraabdominal pressure and decreases in lung and chest wall compliance, obesity is associated with a restrictive pulmonary process.7 In addition, obesity is accompanied by decreases in functional residual capacity (FRC) and expiratory reserve volume (ERV) leading to rapid desaturation with apnea or hypoventilation both intraoperatively and postoperatively.7 Depressed FRC below closing capacity may lead to airway closure during tidal breathing. The degree of airway closure can be correlated with arterial oxygenation and hypoxemia.7 These physiologic pulmonary changes are amplified under general anesthesia and in steep Trendelenburg.

Pneumoperitoneum with carbon dioxide may lead to significant increases in the partial pressure of carbon dioxide (PaCO2) and end-tidal carbon dioxide measurements (EtCO2) via absorption of gas from the insufflated abdomen. Increasing minute ventilation and decreasing intraperitoneal CO2 pressure may abate hypercapnia and acidosis, but ventilation/perfusion (V/Q) mismatch and underlying lung pathology (i.e., obesity and chronic obstructive pulmonary disease) may prevent normalization of PaCO2 or EtCO2. Permissive hypercapnia is generally well tolerated if normocapnia cannot be achieved.5 Steep Trendelenburg positioning results in increased peak and plateau airway pressures especially in obese patients (Figure 1). However, for the same airway pressure, the transpulmonary pressure, which is the difference between alveolar and intrapleural pressures, is likely lower in the anesthetized morbidly obese patient, secondary to decreased chest wall compliance and higher intraabdominal pressure.8 Transpulmonary pressure is directly related to the pressure required to distend alveoli. Therefore, the likelihood of barotrauma at any given airway pressure is lower in obese patients than in patients of normal weight. Additionally, due to the increased pressure on the diaphragm from intraabdominal organs, the transpulmonary pressure is lower in the steep Trendelenburg position than in the supine position.8 Obesity and steep Trendelenburg seem to have protective effects against higher airway pressures. In fact, many experts advocate for accommodating higher airway pressures in obese patients to prevent against alveolar collapse and atelectrauma.8,9 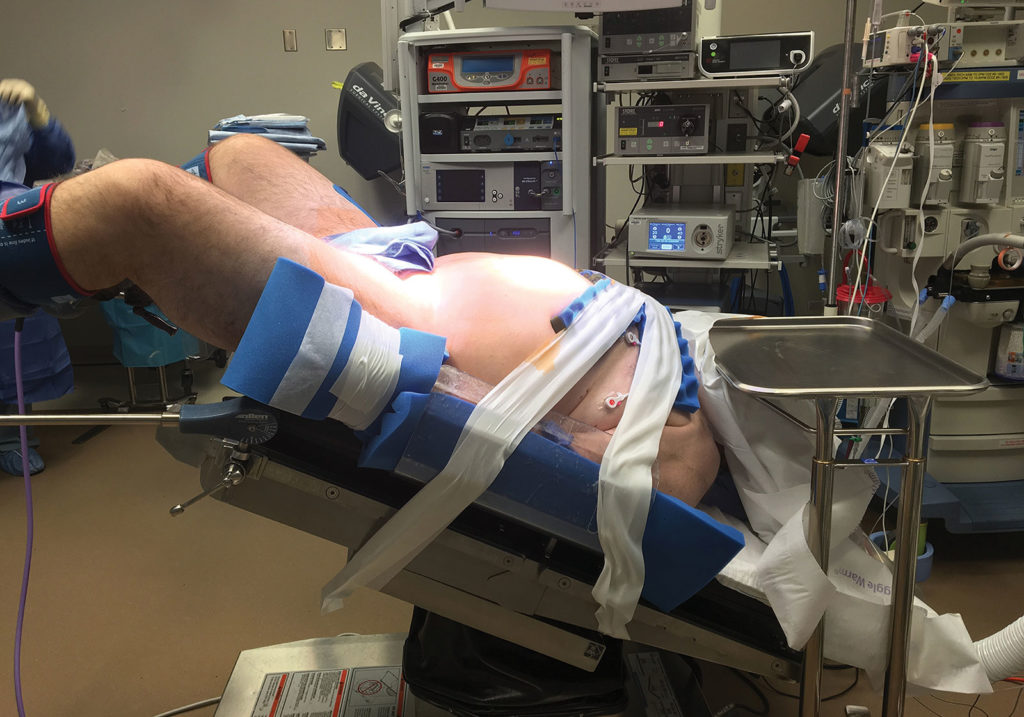 Figure 1. This figure depicts an obese patient in the steep Trendelenburg position being prepared for robotic surgery.

There is no ideal ventilation strategy for obese patients undergoing robotic surgery. Increasing evidence supports limitation of tidal volumes to 6–8 mL/kg of ideal body weight, which may result in tidal volumes below 400 mL per breath for some patients.10 With lower tidal volumes a higher fraction of inspired oxygen (FiO2) may be required to maintain adequate oxygenation in obese patients.10 This strategy has been associated with significant atelectasis with resultant hypoxia and hypercapnia. In order to optimize ventilation and minimize hypercapnia for obese patients in steep Trendelenburg, a pressure control ventilation mode may be considered. With pressure control modes (PCV), there is evidence of improved oxygenation and elimination of carbon dioxide while maintaining better alveolar recruitment and decreasing peak airway pressures.7 The higher inspiratory flow utilized in PCV may result in increased alveolar recruitment and improvement in ventilation/perfusion ratio. PCV may improve hemodynamics and decrease the likelihood of barotrauma, but may be associated with hypoventilation and hypercapnia, which can be particularly detrimental for this patient population.7 The addition of positive end expiratory pressure (PEEP) can improve oxygenation and guard against alveolar collapse and atelectrauma.8

In addition to potentially difficult intraoperative management, obese patients are at risk for postoperative re-intubation following robotic surgery.11 Many obese patients suffer from obesity hypoventilation syndrome or obstructive sleep apnea resulting in increased risk of hypoventilation postoperatively. Especially when combined with sedatives and opioid medications, patients are at risk for respiratory depression and respiratory failure. Intraoperatively, pneumoperitoneum and fluid administration in steep Trendelenburg are associated with the development of subcutaneous emphysema and airway edema, respectively.5 Because there is no direct correlation between the degree of facial edema and the presence or severity of pharyngeal or laryngeal edema, performing a cuff leak test prior to extubation may be considered.5 For patients that cannot ventilate around a decompressed endotracheal tube cuff, anesthesia professionals may need to contemplate temporary postoperative intubation and ventilation.5

Obesity is associated with a significantly higher incidence of obstructive sleep apnea as compared to patients of normal weight. With almost half of obese patients suffering from OSA, postoperative monitoring and treatment of hypoxia is obligatory.12 Postoperatively, patients with OSA are at increased risk for morbidity and mortality associated with increased airway obstruction related to residual anesthetics and sedatives as well as with comparatively small doses of opioid medications.12 Ahmad and colleagues have shown that obese patients with polysomnograms negative for OSA can have significant postoperative desaturation events despite treatment with supplemental oxygen.12 Continuous post-operative pulse oximetry should be considered for obese patients with OSA following robotic surgery in steep Trendelenburg.13 Medications that depress the respiratory drive should be carefully titrated. Supplemental oxygen and CPAP, as appropriate, are recommended to prevent or lessen the severity of hypoxic events.12,13 Routine ICU admission is not indicated.12

Cerebral blood flow (CBF) is autoregulated under normal physiologic conditions. Although it initially increases with the institution of steep Trendelenburg, cerebral perfusion pressure (CPP) may decrease throughout a robotic procedure especially as the CVP rises due to head-down positioning.14 As long as MAP is maintained, CPP should remain adequate to support cerebral processes. Due to pneumoperitoneum, positioning, and increased intraabdominal pressure from obesity, intracerebral pressure (ICP) rises. Hypercarbia causes cerebral vasodilation and increased intraperitoneal and intrathoracic pressure. This in turn, decreases cerebrospinal fluid (CSF) drainage, resulting in elevations in ICP.14 Despite increases in ICP and evidence of facial and laryngeal edema from steep Trendelenburg positioning, there is no evidence to support the routine development of cerebral edema.5 For patients in whom abnormal cerebral autoregulation or changes in the blood-brain barrier exist or are suspected (i.e., a space occupying brain lesion), consultation with neurosurgery may be considered.

Due to steep head-down positioning, patients are at risk for cephalad slippage on the operating room table.17 Sliding may result in dermal, nerve, and robotic trocar site-related injuries. Mechanical slipping can be prevented by use of antiskid bedding, knee flexion or lithotomy positioning, shoulder braces, beanbag cradling, and padded cross torso straps.18 However, shoulder braces and beanbag positioners in particular are associated with increased risk of brachial plexus injury.19,20 In a simulation study using mannequins of different weights, Nakayama and colleagues found an association between increasing weight and increased cephalad sliding in steep Trendelenburg. Lithotomy positioning decreased the risk of cephalad displacement.21 Although there is no documented weight limit for steep Trendelenburg, one must continuously ensure proper positioning to prevent against injury. In an effort to decrease risks associated with steep Trendelenburg positioning, Ghomi and colleagues suggested that robotic assisted benign gynecologic surgery can be performed safely in Trendelenburg position with a mean angle of only 16 degrees.22 However, the patients included in this study had a mean BMI of 28. Additional research must be done to determine the appropriate and safe angle for use in obese patients.

Robotic pelvic surgery may be performed safely in obese patients. Anesthesia professionals must consider that robotic surgery predisposes obese patients to various hemodynamic changes, alters respiratory system physiology, and increases risk for central and peripheral nervous system damage. MAP, CVP, and SVR increase as a result of positioning and abdominal insufflation. Pneumoperitoneum with carbon dioxide leads to elevations in carbon dioxide, which may be difficult to eliminate due to decreased lung and chest wall compliance and elevated airway pressures in obese patients in steep Trendelenburg. Postoperatively, obesity predisposes to increased risk of respiratory depression and airway compromise. Vigilance must be maintained throughout the perioperative period to avoid morbidity and mortality in this vulnerable population.

Dr. Dalton is assistant professor in the Department of Anesthesia & Critical Care at the University of Chicago.

This author has no conflicts of interest pertaining to this article.