The International Association for the Study of Pain (IASP) defines pain as “an unpleasant sensory and emotional experience” associated with actual or potential tissue damage, or described in terms of such damage.1 Although pain management continues to be a major societal issue, approximately 116 people die each day from opioid overdose in the United States.2 Given the concern that abuse sometimes starts with opioids prescribed in the course of medical care, health care systems throughout the world have adopted a multimodal approach to acute and chronic pain management to reduce opioid prescriptions.2 This article describes the rationale for use of multimodal analgesia and discusses nonopioid medications that can be used as part of a multimodal approach to postoperative pain relief. It is worth noting that the medications listed here can be adjuncts to a general, regional, or neuraxial anesthetic.

Abandoning the old opioid-centric model, physicians are focusing more on nonsteroidal anti-inflammatories, acetaminophen, gabapentinoids, NMDA antagonists, alpha-2-agonists, and sodium and calcium channel blocking agents. Such multimodal therapy has at least two desirable effects. First, a multimodal approach may decrease the use of opioids and associated side effects (e.g., delirium, and respiratory depression), tolerance, and diversion.3-5 Second, a multimodal approach may be a more effective pain control strategy, potentially decreasing the complications associated with suboptimal pain control, such as pneumonia, deep venous thrombosis, and postoperative cognitive dysfunction.3-5

Poor pain control impedes postoperative rehabilitation, reduces patients’ health-related quality of life, causes significant personal burden, and adds to national health care expenditure.6,7 Moreover, inadequate analgesia in the acute postoperative period may not only lead to the development of chronic pain, but also significant postoperative cognitive dysfunction.8 While an opioid-sparing multimodal approach to pain management is important, it is not a panacea. Pharmacologic nociceptive modulation is most effective when combined with behavioral modification as procedural anxiety may result in worse postoperative outcomes and the development of chronic pain.9 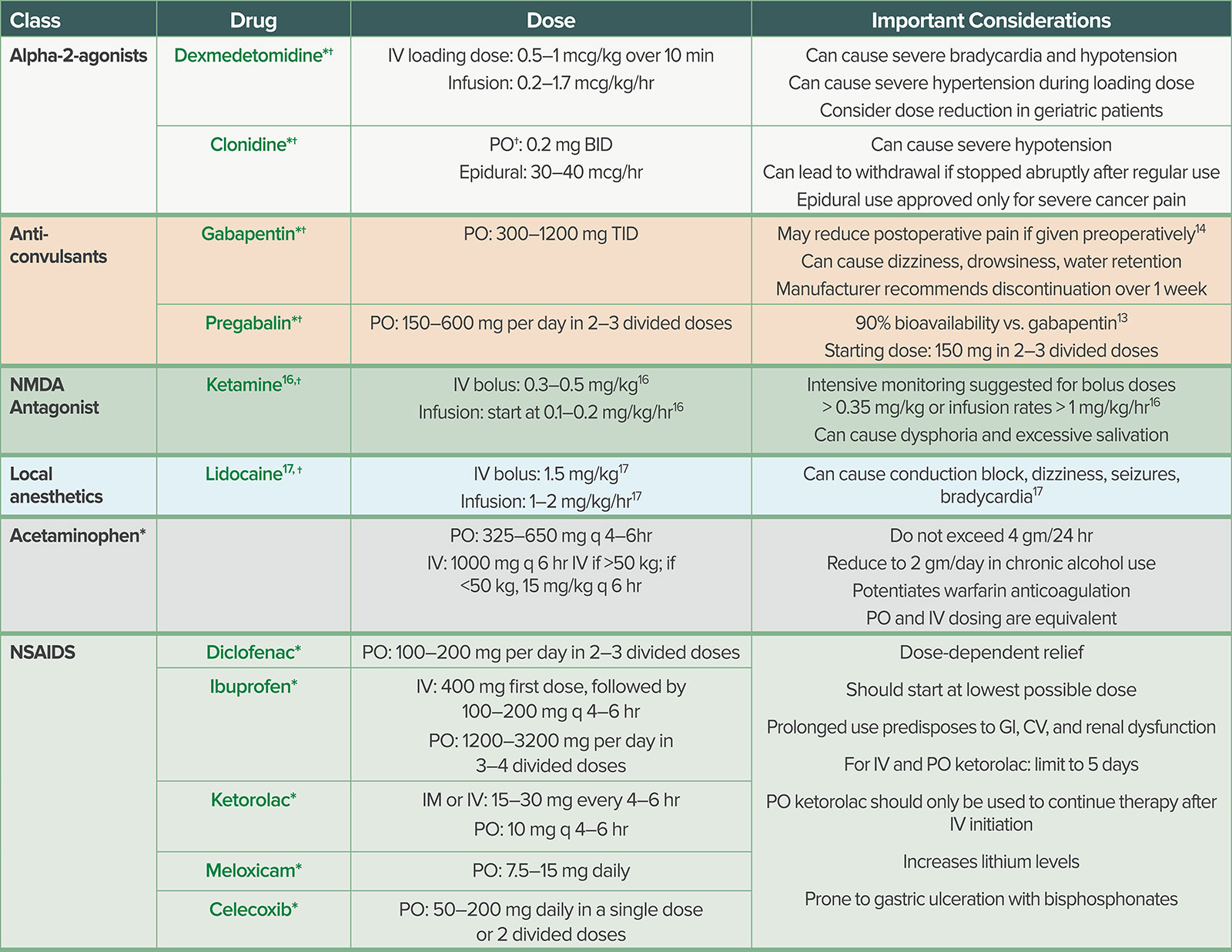 Alpha-2-agonists: The two common alpha-2-agonists used in clinical practice today are clonidine and dexmedetomidine.10 The primary mechanism of antinociception is the direct stimulation of the alpha-2-adrenoreceptors in the central nervous system and spinal cord.10 At the cellular level, alpha-2-agonists inhibit cyclic adenosine monophosphate, which reduces potassium efflux and calcium influx causing a hyperpolarized state of the adrenergic neurons.11 When hyperpolarization occurs, there is reduced norepinephrine release, which is postulated to be the mechanism of hypnosis and sedation.11 Direct stimulation of alpha-2-receptors also inhibits nociceptive neuronal firing, thereby reducing the release of substance P, a key excitatory neuropeptide responsible for painful responses.11 Dexmedetomidine has a much higher affinity (approximately 8:1) than clonidine at the alpha-2 receptor site.10 Both agents may significantly reduce opioid consumption, postoperative nausea/vomiting, anxiety, postoperative shivering, and stress responses intraoperatively.12 The most common side effects of alpha-2-agonists are hypotension and bradycardia.10,12

Anticonvulsants: Gabapentin and pregabalin are anticonvulsant agents commonly used as perioperative analgesics. Both agents bind to voltage-gated calcium channels and promote antinociceptive actions by inhibiting the release of excitatory neurotransmitters.13 These medications were initially used for treatment of chronic neuropathic pain, but they may also work to prevent and reduce acute pain and opioid consumption. Recent evidence also suggests that they may reduce chronic postsurgical pain (CPSP), although more clinical trials are needed.14,15 Common side effects of gabapentin include increased sedation, peripheral extremity swelling, and weight gain.

Ketamine: Ketamine is a nonbarbiturate dissociative anesthetic agent that has hypnotic, analgesic, and amnestic effects. It has been used clinically in subanesthetic doses for the treatment of neuropathic, acute, and chronic pain syndromes.16 Ketamine analgesia is mediated through inhibition of the N-methyl-D-aspartate (NMDA)-gated calcium channel. NMDA receptors are important for the progression of long-standing changes in neuronal excitability and to the development of allodynia and hyperalgesia. Ketamine may produce anti-hyperalgesic effects through the reduction of NMDA-receptor activity.17 The side effects of ketamine include increased sympathetic activity, elevated intracranial pressure, increased salivation, nystagmus, and hallucinations. Therefore, caution is advised when using ketamine in patients with coronary artery disease, intracranial pathology, and psychiatric comorbidities.

Local anesthetics: These drugs are useful in a wide range of procedures, as they can be administered subcutaneously, intravenously, and utilized in peripheral nerve blocks and neuraxial anesthetics. Multiple studies have evaluated the efficacy of intravenous lidocaine for colorectal surgery. While some studies suggest a benefit in terms of improved gastric motility and reduced hospital length of stay, the overall findings are not consistent.18-20 The mechanism of action of lidocaine is blockage of sodium channels; however, the mechanism of action in systemic pain control is still not entirely understood.19 A recent Cochrane review showed low quality of evidence and uncertainty as to whether systemic lidocaine infusions improve pain perioperatively in a variety of patient populations; however there was heterogeneity in dosing and administration between studies and surgical cases.20 A protocol-driven approach across institutions may help answer this question definitively in the future. Nevertheless, IV lidocaine has analgesic, antihyperalgesic, and anti-inflammatory properties that make it another potential option for perioperative pain control.19

Acetaminophen & NSAIDs: The use of acetaminophen and nonsteroidal anti-inflammatory drugs in the perioperative period can reduce perioperative opioid use and pain.17,21 Acetaminophen and NSAIDs can be administered orally and intravenously. However, the onset of action is slightly faster when administering both of these agents intravenously rather than orally.17 There are numerous side effects of NSAIDs including gastric irritation, gastric bleeding, platelet dysfunction, increased risk of cardiovascular disease, and worsening renal function.21 Therefore, caution is advised in selecting the appropriate drug for a patient. The primary side effect of acetaminophen administration is potential liver toxicity, and caution is advised in patients with pre-existing liver dysfunction.

The opioid-sparing multimodal analgesic options discussed above are integral for optimal pain management in the perioperative period. Nevertheless, opioids still have a critical role in acute postoperative pain management especially for procedures where a primary regional, neuraxial, or local infiltration is not possible. This article is not intended to deter clinicians from using opioids as an analgesic altogether, especially after surgery; instead, it offers strategies to mitigate the opioid-related side effects, improve perioperative analgesia, and reduce the incidence of cognitive dysfunction. As anesthesia professionals, we should take a more active role in the perioperative management of patients’ analgesic regimens. This may reduce the unwanted effects of uncontrolled pain and accidental overdoses of opioids.

Drs. Veena Graff and Taras Grosh are assistant professors specializing in acute and chronic pain management as well as regional anesthesiology at the Hospital of the University of Pennsylvania in Philadelphia, PA.

Neither author has anything to disclose as it pertains to this article.

The information provided is for safety-related educational purposes only and does not constitute medical or legal advice. Individual or group responses are only commentary, provided for purposes of education or discussion, and are neither statements of advice nor the opinions of APSF. It is not the intention of APSF to provide specific medical or legal advice or to endorse any specific views or recommendations in response to the inquiries posted. In no event shall APSF be responsible or liable, directly or indirectly, for any damage or loss caused or alleged to be caused by or in connection with the reliance on any such information.