Venous air embolism (VAE) is a life-threatening emergency. Extensive causes of air embolism have been described in the literature.1 Embolisms from peripheral intravenous (IV) infusions are extremely rare, especially in the pediatric population. However, they can still occur1-5 and have the potential to be fatal.6 We present a potential cause of VAE due to a malpositioning of a 150 mL burette (ICU Medical Inc., Burette Set, B33839) resulting in failure of the shut-off valve. This problem has not been previously described in the literature.

At our institution, 150 mL burettes are attached to Normal Saline (NS)/Lactated Ringer’s (LR) 500 mL solution collapsible bags for IV fluid administration in children less than nine years old (Figure 1). A shortage of NS/LR 500 mL bags prompted the use of NS/LR 1000 mL bags. However, the NS 1000 mL bag caused the burette to hang at an angle, which in turn, led to a malpositioned shut-off valve (Figure 2). Theoretically, if all the fluid in the burette had been administered and the vent (Figure 3) remained open, the Venturi effect at the venous access site could have allowed air in the IV tubing to enter the circulation. This process could lead to a VAE. If the burette vent is closed, air is prevented from reaching the patient. Fortunately, for our patient, the vent was closed, preventing air from eventually reaching the venous circulation. 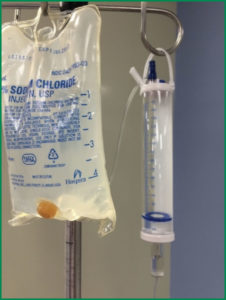 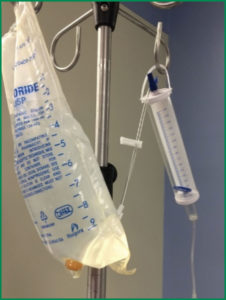 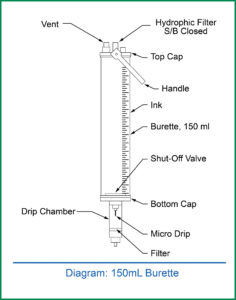 Figure 3. Depicts the setup of the burette.
Reproduced and modified with permission from ICU Medical Inc.

The National Quality Forum considers VAE a “never event” and the Joint Commission lists it as one of their reportable “sentinel events.”7 VAEs due to peripheral venous infusions can occur due to a variety of errors: inadequately primed tubing,2,6 use of an IV pump without an air detection alarm,3 and manipulation of peripheral IVs.4,5 The outcomes can be devastating, especially in infants or patients with congenital heart disease since paradoxical emboli are more likely to occur with a patent foramen ovale or a right-to-left shunt.2-5 The addition of a micron air filter to the distal end of peripheral IV tubing can substantially decrease the risk of VAE.1-2 However, these filters can add significant resistance and may hinder gravity infusion, especially in conjunction with small gauge peripheral IVs. Air detection devices (albeit more expensive)meticulously de-airing of infusion sets, and inline air removal devices (such as, autoventing filters) may reduce the VAE risk.8,9 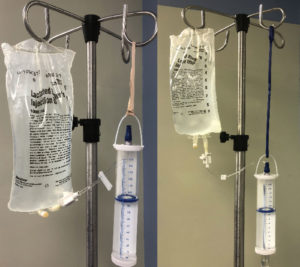 Figure 4. Burette with addition of rubber band or device with 1000 mL LR Bag.

While the 150 mL burette is ideal to administer the appropriate amount of IV fluid to smaller pediatric patients via gravity infusion, the anesthesia professional should be aware of the possible increased risk of venous air embolism due to the rigid nature of the burette. The built-in shut off-valve helps mitigate this risk, but only if the burette is hanging perpendicular (straight) to the floor (Figure 3). If a 1000 mL fluid bag is required, the simple addition of a rubber band or similar device which lowers the burette in relation to the fluid bag allows it to hang in vertical orientation, eliminating the risk of a malpositioned shut-off valve (Figure 4). We recommend the addition of a micron air filter if the health care provider does not have direct visualization of the chamber while fluids are being administered, and especially in those patients at highest risk of paradoxical emboli.

None of the authors have any disclosures as they pertain to this article.

We thank the editors for the opportunity to respond to this report. This case describes the use of a burette set to administer fluid while hanging in a non-vertical position. In this case, no patient injury was reported and ICU Medical has not received the product described in the report for further evaluation.

Based on this report, ICU Medical has initiated a review of our burette set products and associated labeling. The directions for use of burette products will be reviewed in consideration of adding specific recommendations to use the burette only in the vertical position for the shutoff valve function. Additionally, alternative shut off valve designs will be evaluated for performance comparison to the float valve. Proximal tubing length (between the solution container and the burette) will be assessed in consideration of length extension to prevent burette pull when connected to a 1000 ml flexible container. The addition of air-eliminating filters on our burette sets will be considered as a customer option.

Utilization of an infusion pump with an air trap and/or an air-in-line detector is an additional option for patients who require precise fluid management and are at risk for air embolism. Infusion pumps enable accurate delivery of infusion volumes, detection of air, and utilize administration sets available in multiple configurations including those with needle-free injection ports, air filters, and burettes.

In summary, ICU Medical thanks the authors for sharing this report with the anesthesia community. We appreciate the opportunity to provide this response and details for the safe and effective use of burette sets.