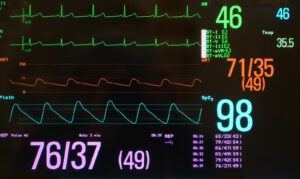 When patients reach the postanesthesia care unit after undergoing major noncardiac surgery, families assume they have naturally survived the most dangerous part of the perioperative experience. Their assumption is wrong. Mortality in the 30 days after surgery is more than 100 times higher than intraoperative mortality.1,2 In fact, if the month after surgery were considered a disease, it would be the third leading cause of death in the United States.3

Three-quarters of postoperative mortality occurs during the initial hospitalization, that is, under direct medical care in our highest-level facilities.4 The two most common and comparable causes of 30-day mortality after noncardiac surgery are major bleeding and myocardial injury.5,6

More than 90% of MINS and MI occurs within the initial two postoperative days, and more than 90% are asymptomatic.12 While it is tempting to dismiss asymptomatic troponin elevations as “troponitis,” mortality is nearly as high without symptoms as with symptoms (Figure 1). MINS should thus be taken as seriously as classical symptomatic infarctions. 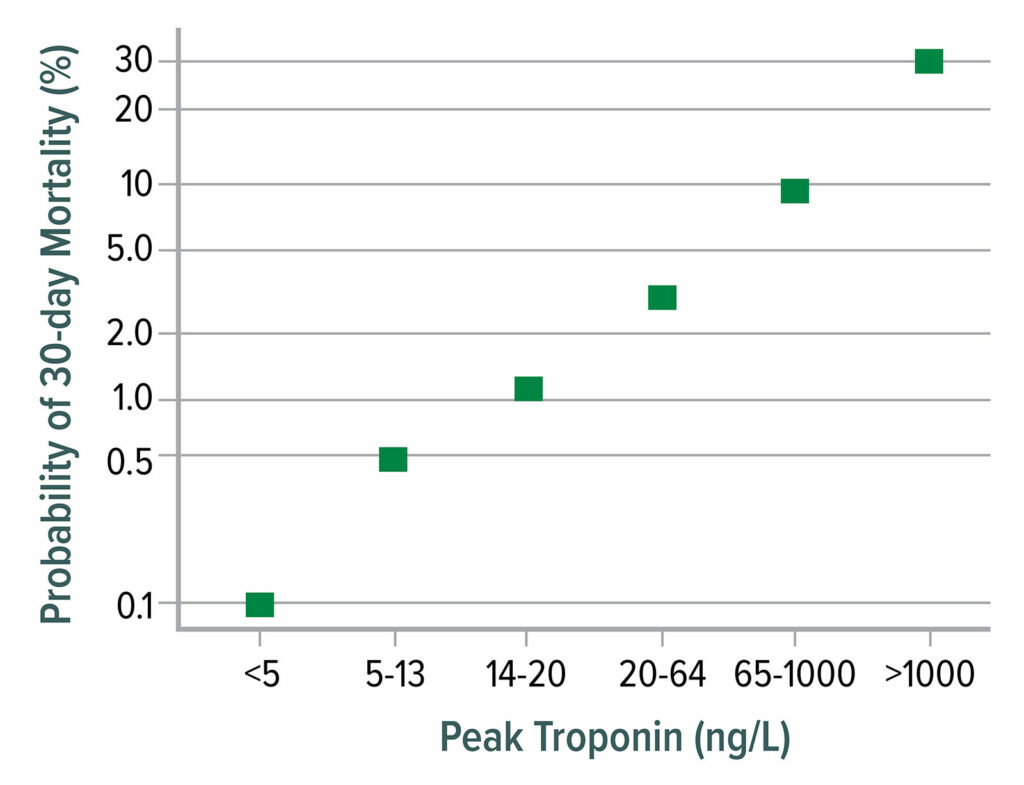 Data from Writing Committee for the Vision Study Investigators: Association of postoperative high-sensitivity troponin levels with myocardial injury and 30-day mortality among patients undergoing noncardiac surgery.12
This figure is adapted from data presented in reference 12.

In the absence of routine troponin screening, most myocardial injury is missed. A reasonable strategy is to measure troponin preoperatively and for the first three postoperative days. The thresholds for MINS differ depending on the assay generation and type:

Both MINS and MI are strongly associated with many unmodifiable baseline characteristics including age, diabetes, and cardiovascular history. Large randomized trials (n=7,000–10,000) have shown that MI cannot be safely prevented by beta blockers,14 avoiding nitrous oxide,15 by clonidine,16 or aspirin.17 In a recent large trial, one patient in seven who had MINS had a major vascular event (mostly re-infarctions) within 17 postoperative months.11 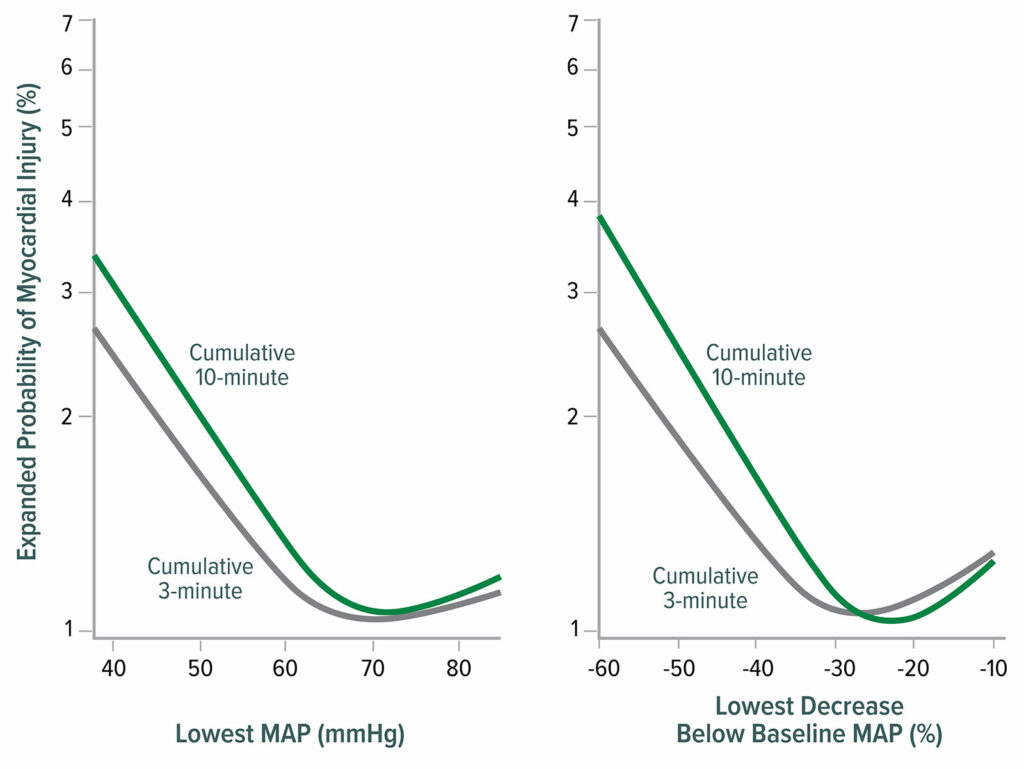 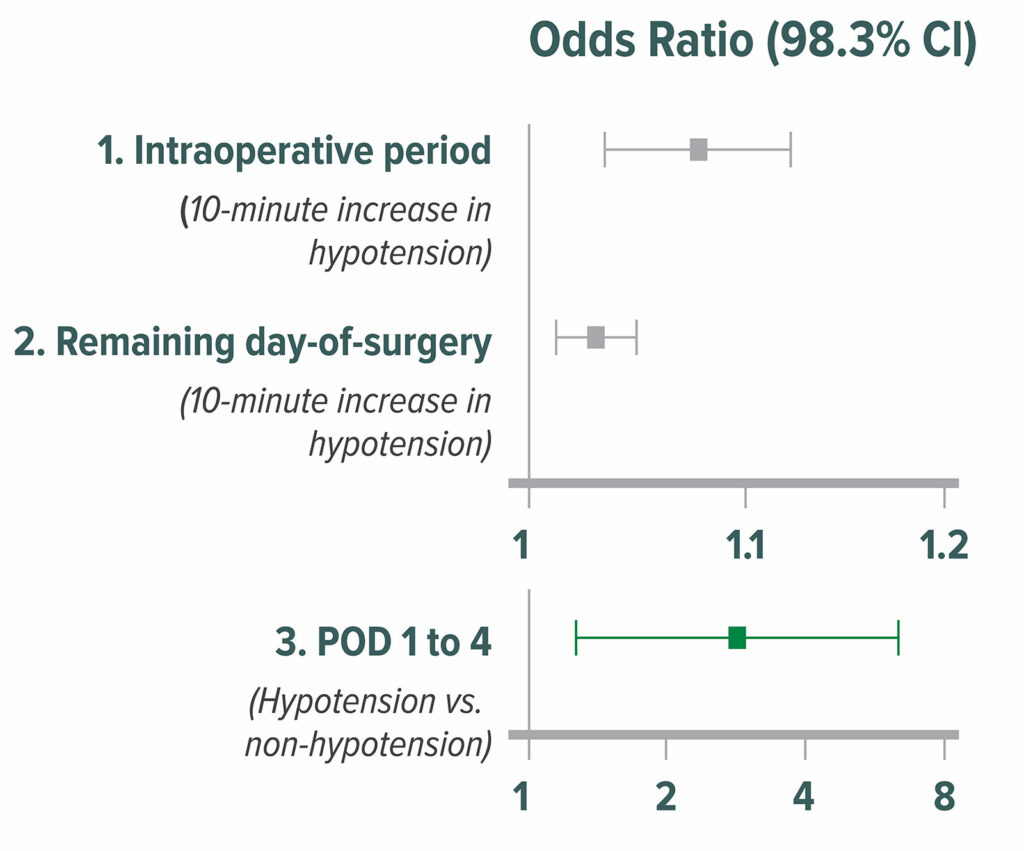 Figure 3: Odds ratios of average relative effect on the primary composite of 30-day myocardial infarction and mortality for three perioperative periods: intraoperative, remaining day of surgery, and the initial four PODs of hospitalization. CIs for multiple comparisons were adjusted by Bonferroni correction. Correspondingly, P<0.017 (0.05/3) was considered to be significant for the average relative effect. The squares present the odds ratios, and the bars present the CIs. POD = postoperative day.20 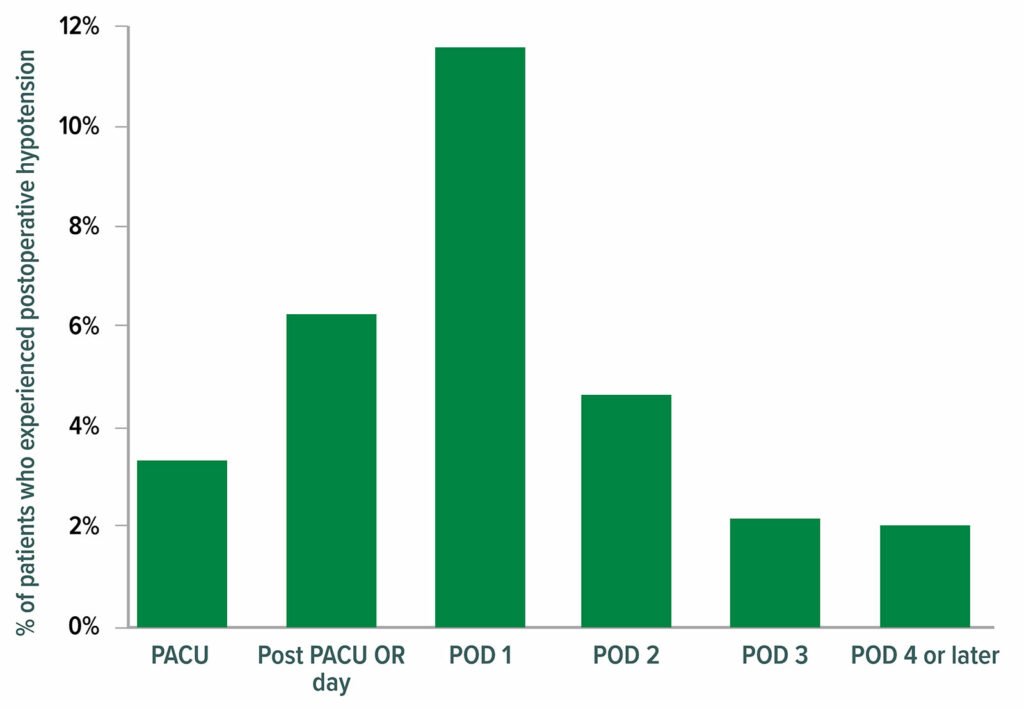 Figure 4: Clinically meaningful hypotension (systolic pressure <90 and prompting intervention). In total, 2,860 of 14,687 patients (19.5%) experienced at least one episode of clinically meaningful hypotension after their surgery; 2,728 (95.4%) of those patients experienced a hypotensive episode by postoperative day (POD) 3. OR = operating room; PACU = postanesthesia care unit.22

Two recent studies identified remarkably strong associations between postoperative anemia and myocardial injury27 and infarction,28 even after adjusting for baseline patient characteristics and preoperative anemia. In contrast, a heart rate up to 100 beats/min and systolic hypertension up to 200 mmHg are not important risk factors for postoperative myocardial injury.29 General hospital floor hypoxemia is common, profound, and prolonged30; however, it remains unknown whether hypoxemia contributes to myocardial injury. Fortunately, simultaneous hospital floor hypotension and hypoxemia—which might especially provoke supply-demand injury—is rare. 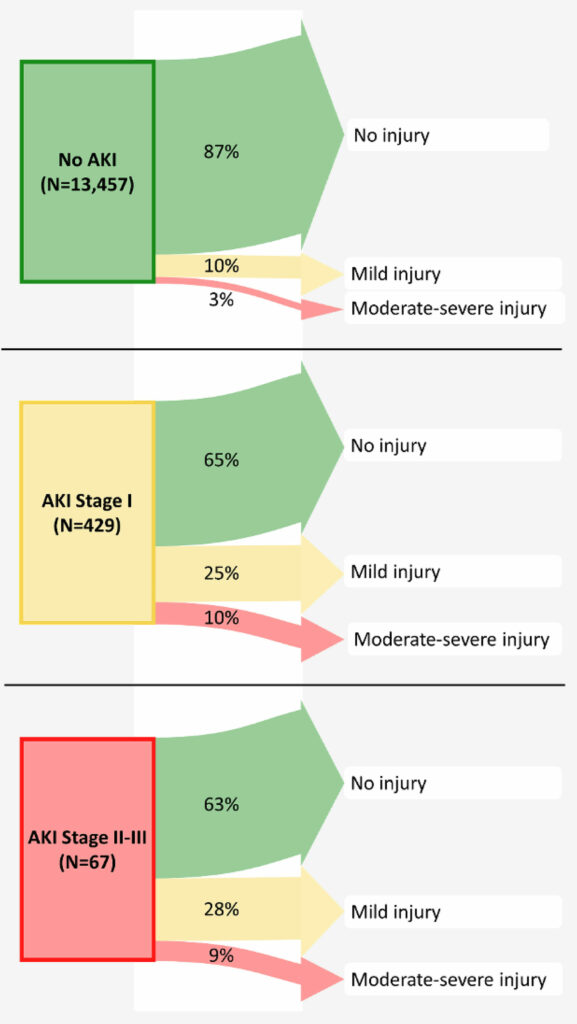 New-onset acute kidney injury (AKI) is common after noncardiac surgery, with stages 2–3 occurring in up to 1% of patients,31 and in up to 7.4% of patients when stage 1 AKI is included.32 There is currently no reliable way to predict AKI.33 The hypotensive harm threshold for AKI is similar or slightly higher than that for myocardial injury, presumably because the metabolic rate of the kidney is high.18,32,34

Notably, at a more stringent MAP cut-off of <55 mmHg, <5 minutes below this pressure is associated with an 18% increase in risk for AKI.34 Other analyses report similar associations.35 Taken together, these studies confirm a robust association of both degree and duration of perioperative hypotension and AKI, and hence the importance of considering both duration and excursion when quantifying hypotension.

The implications of perioperative AKI extend past the index hospitalization. In a 1,869-patient observational cohort examining the association of perioperative AKI with 1-year mortality, AKI was associated with an adjusted hazard ratio for death of 3.36 Lastly, we note that even milder degrees of AKI have lasting consequences: 37% of Stage 1 AKI persists or is worse 1–2 years after non-cardiac surgery (Figure.6).37

Delirium is a common complication of cardiac surgery and is associated with morbidity and mortality.38-42 The reported incidence of delirium after major non-cardiac surgery is about 10%, and increases markedly as patient age increases beyond 65 years.43 The pathophysiology of delirium is multifactorial, but presumably includes inadequate brain perfusion that results when mean arterial pressure is less than the lower limit of autoregulation.44-46

The cerebral autoregulation threshold remains unclear, but there appears to be considerable inter-individual variation, and may be as high as 85 mmHg in some patients.47,48 Consistent with this theory, hypotension is associated with delirium and cognitive decline (Figure 7),49-51 although inconsistently.52-54 Limited randomized data (n=199) indicate that hypotension causes delirium.55

Figure 7: Adjusted hazard ratio of delirium in 908 postoperative patients who were admitted directly from an operating room to the surgical intensive care unit. Delirium was assessed with the Confusion Assessment Method for Intensive Care Unit patients at 12-hour intervals. 316 (35%) patients had delirium within the first 5 postoperative days in the surgical intensive care unit. Intraoperative hypotension, MAP <65 mmHg was significantly associated with higher odds of postoperative delirium.50 TWA=Time Weighted Average

Patients who have delirium after surgery are far more likely than others to develop long-term cognitive impairment;56 however, it remains unknown whether the association is causal. Hypotension may also provoke overt—or far more commonly—covert strokes which are strongly linked to delirium.57

Continuous blood pressure monitoring detects more hypotension than measurements at 5-minute intervals,60,61 thus allowing clinicians to intervene earlier.61 An exciting recent development is an algorithm that predicts future hypotension from the arterial waveform.62 Although a small trial reported less hypotension when management was guided by the index,63 a larger one did not identify benefit.64 The difference likely results from differences in the treatment algorithms, and a robust trial is clearly needed.

Vasopressors like phenylephrine or norepinephrine are commonly used to treat hypotension during surgery. Phenylephrine is by far the most commonly used pressor in the United States,65 whereas norepinephrine is generally preferred elsewhere. Phenylephrine is a pure alpha agonist which raises blood pressure by increasing systemic vascular resistance, usually with a compensatory decrease in cardiac output.66 In contrast, norepinephrine combines powerful a-adrenergic agonism with weak b-adrenergic agonist activity which helps maintain cardiac output. Consequently, while blood pressure is comparably maintained with each vasopressor,67 phenylephrine reduces splanchnic blood flow and oxygen delivery.68 Clinicians should avoid phenylephrine in patients with septic shock.69

Despite the theoretical advantages of preserved cardiac output and splanchnic perfusion with the use of norepinephrine, there is limited evidence of any outcome improvement in surgical patients.70 Consequently both phenylephrine and norepinephrine are widely used in clinical practice, mostly based on clinical preference and availability. There is no convincing evidence that intraoperative low-dose vasopressors are themselves harmful, and allowing hypotension in an effort to avoid using vasopressors is probably unwise. Norepinephrine can be safely given through a central catheter or peripherally.71 In a recent study of 14,328 patients, there were only 5 extravasation events and not a single patient experienced local tissue injury.72

General hospital floor hypotension is common, prolonged, and profound. It is likely that most perioperative hypotensive organ injury occurs postoperative rather than intraoperatively. The challenge is that blood pressure is usually measured intermittently. Even at 4-hour intervals, about half of all potentially serious hypotensive episodes are missed.73 (Most hypoxemia is similarly missed with intermittent ward monitoring.30) Reliably detecting and treating ward hypotension will require continuous vital sign monitoring. But in the meantime, avoiding angiotensin converting enzyme inhibitors and angiotensin receptor blocks on the day of surgery helps,22 as does restarting chronic antihypertensive medications only when clearly needed.

There is currently sparse evidence that the associations between hypotension and MINS and AKI are causal. But a small randomized trial (n=292) demonstrated that preventing intraoperative hypotension reduces the risk of major complications by 25%, which is biologically plausible.74 Two large trials should identify what fraction (if any) of the observed associations are causal: POISE-3 (n=10,000, NCT03505723) is nearly finished and GUARDIAN (n=6,250, NCT pending) is about to start.

There is currently little randomized data to characterize the extent to which observed associations might be causal. Large trials are in progress, but results will not be available for some time. The question, then, is how to manage blood pressure in the meantime.

Two factors deserve special consideration. The first is how likely is a causal relationship between hypotension and organ injury? Surely much of the observed associations result from unobserved confounding or are predictive rather than modifiable. But it also seems likely that at least a fraction is causal, and thus amenable to intervention. The second factor to consider is how difficult it is to keep intraoperative mean arterial pressure above 65 mmHg or some similar threshold? In general, it is not difficult (or expensive) to keep intraoperative blood pressure well above the apparent harm threshold. In many cases, simply moderating anesthetic administration and skillfully managing fluids is sufficient. In others low- or moderate-dose vasopressors will be needed. There is no convincing evidence that administration of low-dose vasopressors is harmful. Preventing postoperative hypotension is far more challenging, but one helpful approach is to delay restarting chronic antihypertensive medications until clearly necessary.

The author is a consultant for Edwards Lifesciences (Irvine, CA) and serves on advisory boards and has equity interests in Sensifree (Cupertino, CA) and Perceptive Medical (Newport Beach, CA).