The results of the “PRediction of Opioid-induced respiratory Depression In patients monitored by capnoGraphY” (PRODIGY) clinical trial were published last year.1 This was a prospective, observational trial of blinded continuous capnography and oximetry, conducted at 16 sites in the United States, Europe, and Asia. A total of 1,335 patients receiving parenteral opioids were continuously monitored with provider-blinded capnography and oximetry on general care floors. Vital signs were intermittently monitored per standard of care and hospital protocol. The study’s pre-defined respiratory depression episodes included any of the following: respiratory rate ≤5 bpm, oxygen saturation ≤85%, or end-tidal carbon dioxide ≤15 or ≥60 mmHg for ≥3 minutes; apnea episode lasting >30 seconds; or any respiratory opioid-related adverse event. The primary aim of PRODIGY was to define the incidence of opioid-induced respiratory depression (OIRD) and to create a multivariable risk prediction tool (i.e., PRODIGY score) to predict respiratory depression (RD) in hospitalized patients.1 One or more respiratory depression episodes were detected in 614 (46%) of 1,335 general care floor patients (43% male, mean age 58±14 years) who were continuously monitored for a median of 24 hrs (IQR 17–26). Five independent variables that included age ≥60 (in decades), sex, opioid naïvety, sleep disordered breathing, and chronic heart failure were part of a multivariable respiratory depression prediction model with an area under the curve (AUC) of 0.76 (table 1). For PRODIGY, capnography and pulse oximetry tracings were obtained on standard hospital wards and reviewed to determine if patients had an episode of RD. During the study, we noticed that many patients who had an RD episode often had multiple episodes. Recently, we conducted a secondary analysis of 250 patients from two participating centers to better understand these multiple episodes.² We confirmed our impression that RD episodes were rarely isolated. One hundred and fifty-five patients had an RD episode, and of these 136 (88%) had multiple episodes. Also, the number of RD episodes per patient increased with higher PRODIGY scores. For example, 100 patients had a low PRODIGY score and of these 47 had RD with a median [interquartile range] 0 [0, 4] number of RD episodes per patient, while 70 patients had a high PRODIGY score and of these 59 had RD with 5 [IQR 1-16] RD episodes per patient, P<0.001. The time from end of surgery to RD episode was also analyzed. The time to the first RD episode was 8.8 hrs [IQR 5.1, 18.0] postoperatively with a peak occurrence of first RD episodes between 14:00–20:00 the day of surgery (figure 1a). Many subsequent episodes also occurred during this time, but there was a statistically significant peak of RD occurrences the next morning from 02:00–06:00 (All episodes within the first 24 postoperative hours, figure 1b). These results suggest that the PRODIGY score not only calculates risk for a patient having an RD episode, but that these patients have more episodes. Also, the time distribution of RD episodes has implications for postoperative continuous monitoring—specifically, such monitors should be applied upon dismissal from the recovery area.

Table 1: The PRODIGY risk score and distribution across risk categories. Cells highlighted in green depict an example patient with a high risk of 15 points. 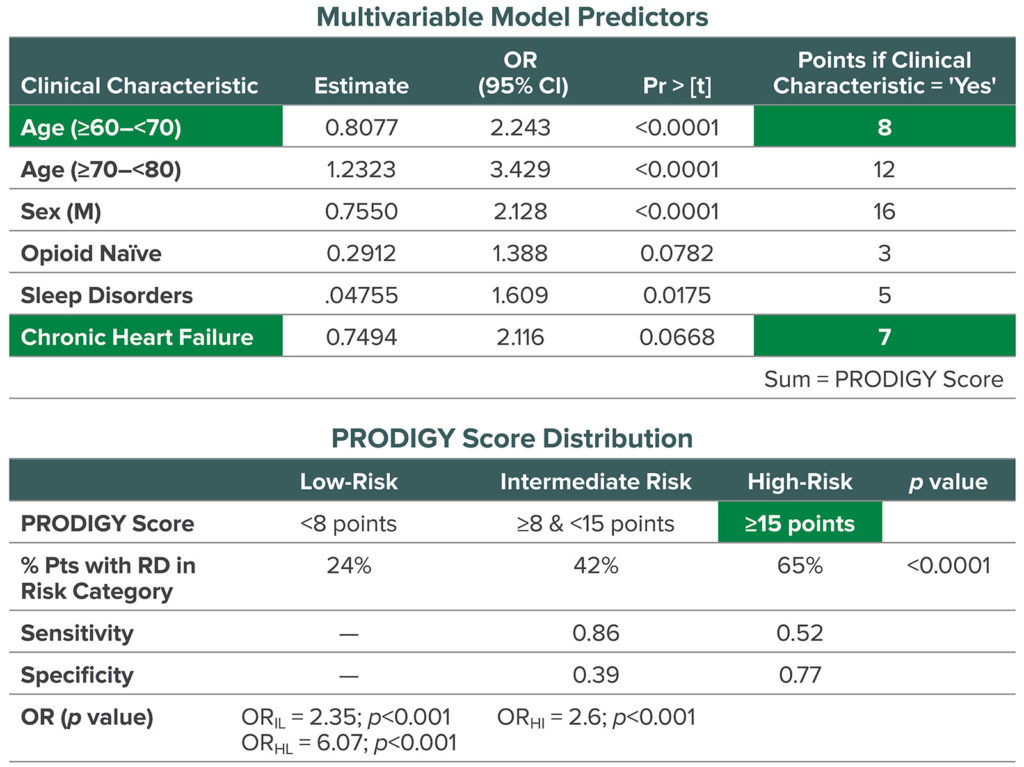 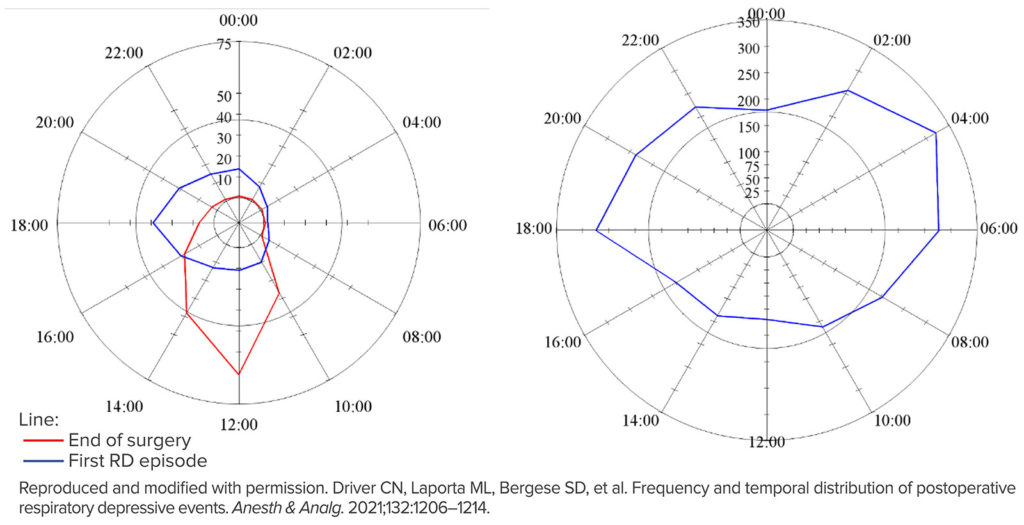 In another recent post hoc analysis we used existing PRODIGY data to get a better understanding of geographic differences that may drive inpatient parenteral opioid administration. This was a unique opportunity given that the original data were collected from the United States, Europe and Asia, and included a total of 16 general care medical and surgical wards. In addition, we wanted to know if the type and route of opioid administered is associated with a reduction of OIRD. There are some interesting findings in this post-hoc analysis that have important social and clinical implications. For example, we found that at Asian study sites, hospitalized patients received 7.2 Morphine Milligram Equivalent (MME) (OR 1.7–18.7) on average, whereas opioid use in the United States (31.5 MME, OR 12.5–76.7) and Europe (31.0 MME, OR 62–99.0) was significantly higher. These differences in analgesic practices are intriguing and should be the subject of future studies. OIRD episodes differed by opioid type, where 54% of patients who received only short-acting opioids (e.g., fentanyl) experienced ≥1 OIRD episode, whereas 45% who only received long-acting opioids (duration of action ≥3 hours) experienced OIRD. Another interesting finding was that tramadol and epidural opioids were associated with a significant decrease in OIRD. The results of our analysis validate previous studies, suggesting that the type of opioid used may impact postoperative outcomes, including the risk of OIRD.³

Total hospital cost increased exponentially for patients with ≥1 respiratory depression episode as length of stay increased.⁴ Similarly, the cost-effectiveness or the ‘break-even point’ for the cost of investment in continuous monitoring with the estimate of the probability of cost-saving with continuous monitoring for an estimated decrease in respiratory depression is being modelled into an easy-to-use health economics model.

PRODIGY has reinforced some lessons learned from the past. First, OIRD is indeed common, and continuous oximetry and capnography can detect this impairment. Second, OIRD occurs in clusters which are commonplace on the day of recovery from surgery and early the next morning. Third, there are distinct geographical variations in the use of opioid analgesia, and regional anesthesia techniques or tramadol may protect from OIRD. Fourth, there is a significant exponential increase in costs associated with length of hospital stay in high-risk patients who experience respiratory depression episodes. While the majority of respiratory depression episodes were not directly associated with immediate life-threatening adverse events, several patients did develop severe opioid-related complications which were treated with naloxone administration. While continuous, portable cardiorespiratory vital signs monitoring for every patient in the hospital may be the ultimate goal, we continue to develop better clinically relevant prediction models using granular characterization of the spread of OIRD events on the hospital ward. Using this continuously collected data to identify patients with pending serious adverse events (e.g., respiratory arrest) so that timely mitigating interventions can be implemented is the ultimate goal. We also hope to continue developing cost-effectiveness models to better predict which patients will receive the most benefit and the amount of reduction in effect size for OIRD events. PRODIGY was not a prospective randomized interventional trial and is, therefore, limited by its nonrandomized study design; however, the signals seen in PRODIGY pave the way for an appropriately powered and designed trial that is able to establish or refute the connection between surveillance monitoring on the general care floor and in patient mortality.

Ashish Khana, MD, reports consulting fees from Medtronic, and research funding to a prior institution for the PRODIGY trial. He is also funded by an NIH/NCATS KL2 award for a pilot trial of continuous hemodynamic and saturation monitoring on hospital wards, and receives unrelated consulting fees from Edwards Lifesciences, Potrero Medical, and Retia Medical.