The Malignant Hyperthermia Hotline (MHH) (800-MH-HYPER) is a service provided by the Malignant Hyperthermia Association of the United States (MHAUS), a non-profit patient advocacy organization. The telephone hotline service provides real-time, 24/7 access to a physician with substantial expertise in MH. During a call, the hotline consultant (HLC) speaks directly with the caller who is either actively managing a suspected MH crisis or has an inquiry about MH susceptibility and medical management. During an active case, the HLC guides the caller, asking diagnostic questions as necessary, gives their impression of likelihood of MH, and makes recommendations for further management. Since 2001, the MHAUS hotline has fielded over 13,000 calls (personal communication with MHAUS hotline coordinator).

In late 2013, MHAUS began systematically logging and saving the details of these calls (including the audio file) into a database. In 2020, we accessed that database to characterize those calls over an approximate 6-year period. Our intention was to inform anesthesia professionals about the characteristics of likely MH patients, and those that were unlikely to have MH. When possible, depending on the nature of the call and the opinion of the HLC, we categorized each call with the likelihood of MH diagnosis as “Unlikely,” “Likely,” or “Indeterminate” when there was not enough information for the consultant to decide. This categorization was based on a database “diagnosis” field, which was completed by a scribe at the time of the call. In general, the diagnosis was gleaned from verbal cues from the hotline consultant, and in most cases the consultant told the caller their beliefs before completing the call.

Our analysis revealed 3,003 calls over five-and-a-half-years, about 1.8 calls per day. There were 88 calls from outside the U.S., originating from eight countries across five continents, with the majority (76) from Canada. Caller specialty was recorded in 1,877 calls. Most (57%) calls were initiated by anesthesia professionals (e.g., anesthesiologists and nurse anesthetists), followed by allied professionals (22%) (e.g., nurses, pharmacists, etc.), and other types of physicians (21%) (e.g., emergency medicine or intensive care).

Patient location at the start of the episode was reported in 859 calls. The most common location was an operating room (OR), with 349 cases. The next most common locations were a post-anesthesia care unit (PACU) and intensive care unit (ICU), with 206 and 304 reported cases, respectively. When referenced to the likelihood of MH, calls from the ICU had the greatest number of “Unlikely MH” cases, and calls from the OR had the greatest number of “Likely MH” cases (figure 1). 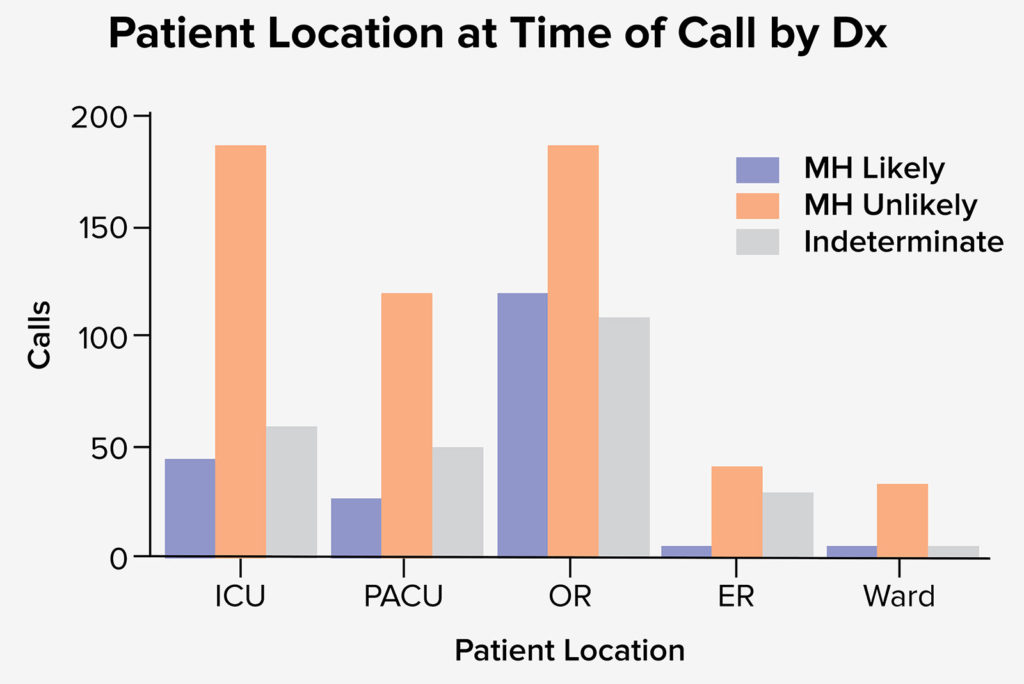 Figure 1. Depicts the total number of calls by location and the corresponding diagnosis. 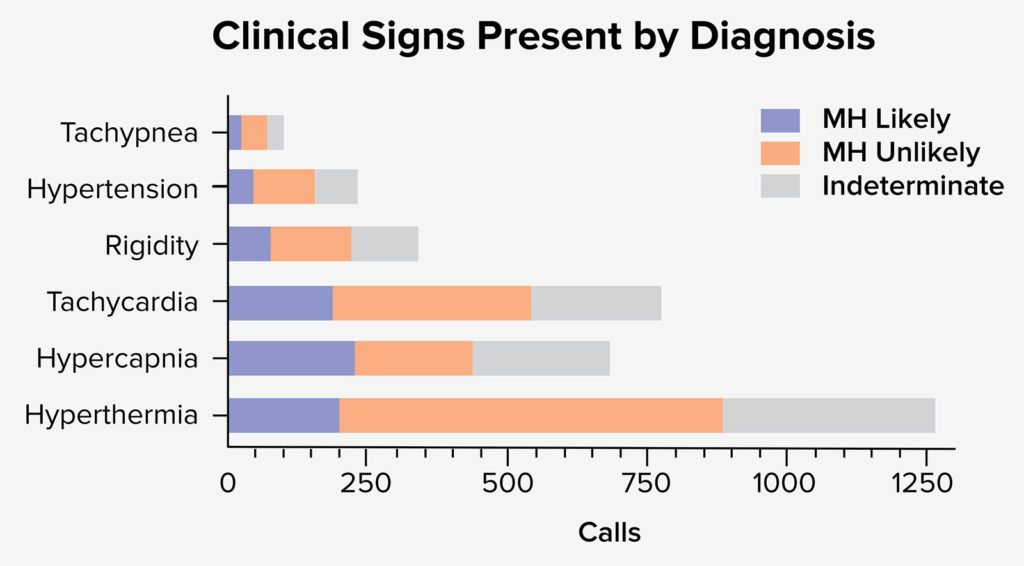 Figure 2. Depicts the clinical signs present by diagnosis. When referenced to likelihood of MH diagnosis it appears that hyperthermia was most likely reported in cases where the diagnosis of MH was Unlikely or Indeterminate. 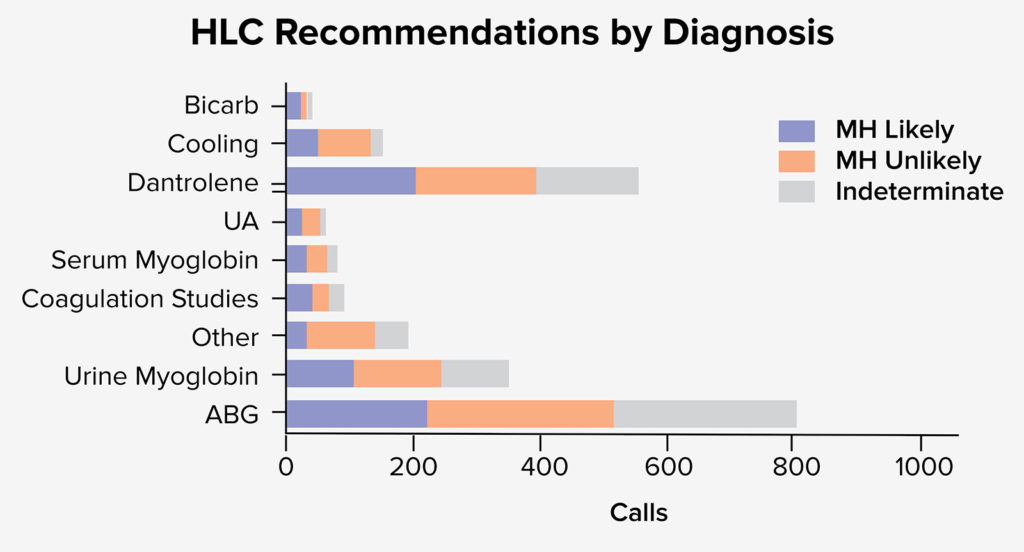 In addition to consults about suspected active cases, there were 950 inquiries about MH. The most common perioperative questions were for a “2nd opinion” (380), safe (trigger-free) technique (e.g., machine preparation) (175), and safe medication (e.g., trigger-free anesthetics) (157). There were 73 inquiries on diseases associated with MH, 41 inquiries on postoperative testing, and 21 on dantrolene pretreatment.

The characteristics of the calls and the recommendations of the HLCs provide a useful way for anesthesia professionals to decide on the likelihood of MH and subsequent therapy:

Hyperthermia was the most frequent sign reported by callers. The name “malignant hyperthermia” leads to many calls reporting extremely high temperatures (>104° F) regardless of the underlying cause. A vast majority of these calls reported isolated hyperthermia and were judged by HLCs as unlikely MH.

When hypercapnia was reported, almost 1/3 cases were judged as likely MH—indicating that hypercarbia could be a more sensitive sign for MH than temperature elevation and other signs in this particular subset analyzed.

Rigidity was not one of the more common signs of MH reported by callers. Rigidity represents the skeletal muscle contractures that occur when unregulated calcium floods the inside of the muscle cell. Rigidity should be considered an important sign of MH (although it is also seen with neuroleptic malignant syndrome and serotonin syndrome), but its absence in no way implies the absence of MH.

MH was deemed unlikely in the majority of calls originating from the ICU and PACU. From the ICU, 57 callers described a patient with respiratory failure who received succinylcholine to assist with tracheal intubation, and who then developed hyperthermia several hours afterward. Many callers from the PACU report unexpected elevated temperatures following elective surgery. Calls from both locations are most likely to involve hyperthermia without other concomitant hypermetabolic signs of MH (as mentioned above). We are not aware of any cases of MH that presented with hyperthermia in the ICU without other signs of hypermetabolism.

The most common intervention recommended by the HLC was arterial blood gas (ABG) analysis. MH is unlikely without the presence of a metabolic acidosis, although possible in early suspected cases. Therefore, an ABG or venous blood gas provides a critical piece of diagnostic information. It may be necessary for HLCs to recommend ABGs more often than other interventions because they are commonly overlooked or difficult to obtain in some centers.

Dantrolene was recommended in many cases when MH was deemed unlikely. Because it acts as a nonspecific antipyretic, dantrolene can sometimes be recommended as a last resort when active cooling measures are ineffective, and the patient’s temperature is dangerously high. However, dantrolene is not without side effects, such as muscle weakness and thromboembolism at the site of administration. Therefore, the benefits and risks of administering dantrolene need to be evaluated on a case-by-case basis.

The most important limitation to deciphering this data is to remember that there exists no rapid bedside test for MH. Experts in MH are using their best judgement based on years of experience managing these cases, but the only way to diagnose MH positively is by contracture biopsy or genetic confirmation of an MH-causative pathogenic variant, usually at the RYR1 gene. By contrast, the only way to rule out MH susceptibility is a negative muscle biopsy contracture test. A very small number of cases reported to the MHAUS hotline have this information entered into the database at a time distant from the original call.

In summary, the MH Hotline provides an important service to the medical community in aiding in diagnosing MH and providing real time clinical recommendations. An in-depth analysis of over 3,000 calls from 2013 to 2020 to the MH Hotline revealed that 1) Isolated post-operative or post-intubation hyperthermia, while commonly leading to a suspicion of MH by callers, is a poor predictor of a “likely MH” diagnosis by an expert consultant; 2) Episodes arising in an OR and those including hypercarbia as a clinical sign more often lead to a “likely MH” consultant impression; 3) Blood gas analysis is the most commonly recommended diagnostic test during a call; and 4) Dantrolene is commonly recommended by consultants, even when they are unsure of an MH diagnosis.

Jay Garcia is a 4th-year medical student at the Perelman School of Medicine at the University of Pennsylvania.

Ron Litman, DO, ML, is professor of anesthesiology and pediatrics at the Children’s Hospital of Philadelphia and the Perelman School of Medicine at the University of Pennsylvania. He was the medical director of the MHAUS hotline from 2013 to 2019.

Teeda Pinyavat, MD, is an assistant professor of Anesthesiology at Columbia University and the New York Presbyterian – Morgan Stanley Children’s Hospital of New York. She is the medical director of the MHAUS Hotline.