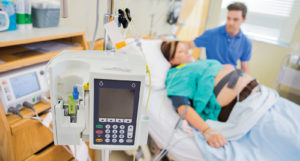 The United States is one of only eight countries worldwide and the only high-resource nation where maternal mortality has increased since 1990.1 Parturients in this country are three times more likely to die from pregnancy-related complications than women in Britain, Germany, or Japan.1 These findings are shocking, especially considering that prior to 1982, United States maternal mortality had improved dramatically over the prior century,2 with the progress attributed to advances in medical care, more hospital deliveries by those trained in obstetrical care, and better aseptic technique.3

Traditionally, the most common causes of maternal death were hemorrhage, hypertensive disorders, thromboembolic events, and infections.4,5 The proportion of deaths due to conventional causes—including anesthesia-related causes—is now declining. The increase in maternal death was attributed to cardiovascular conditions and other co-existing medical diseases.5,6 Given these increases in maternal mortality and morbidity, urgent action is needed to identify and evaluate the causes of these deaths and to identify preventable factors. This need resulted in the formation of the National Partnership for Maternal Safety (NPMS), housed within the Council on Patient Safety in Women’s Healthcare. Its stated mission was to “continually improve patient safety in women’s health care through multidisciplinary collaboration that drives cultural change,” and it aimed to reduce United States maternal morbidity and mortality by 50%. To accomplish their objective, NPMS created patient safety bundles—evidence-based interventions designed to be implemented together to improve outcomes.7 NPMS began by creating materials on three topics: hemorrhage, hypertension in pregnancy, and thromboembolic disease, and published their recommendations on the website: https://www.safehealthcareforeverywoman.org.

It has been four years since the APSF Newsletter published our article on maternal safety with a specific focus on the NPMS maternal safety bundles, and unfortunately our dismal maternal mortality and morbidity rates have not changed as much as we had hoped. In our original article, we referred to the 2007 United States maternal mortality rate (MMR), which was 12.7 per 100,000. With high hopes for an improvement in our numbers, we eagerly waited a decade for the National Vital Statistics Report from the National Center for Health Statistics (NCHS) with the updated MMR from 2018 which was released in January 2020. Unfortunately, our MMR increased to 17.4, making us worst among developed countries, again.8 The newest NCHS data are similar to the old. Women over age 40 carry a higher risk of dying, with a rate of 81.9 per 100,000 births, almost 8 times the risk for a 25-year-old woman. African American women are at particularly high risk. Their MMR is 37.1 deaths per 100,000 live births, a rate 2.5 times that of non-Hispanic white (14.7), and 3 times that of Hispanic (11.8) women.8 Advanced age and Black race together confer a particularly high lethality risk: a Black woman over the age of 40 has a 1 in 700 chance of dying during her delivery hospitalization.4

What happened? Why are our mortality numbers not improving? Those are the questions epidemiologists, clinicians, and researchers are asking. At the time of our original article’s publication, the Bundle on Obstetric Hemorrhage,9 published in 2015, was in the midst of being incorporated into birthing centers across the country. Using the bundle as a starting point, clinicians changed the way they managed a maternal hemorrhage by creating hemorrhage kits and carts, forming response teams, designing updated checklists and time outs for handling a hemorrhage, and establishing huddles and debriefings focused on system issues. Is three years enough time to see a change in our mortality numbers? Perhaps not. First, many delivery centers failed to implement recommended protocols or adhere strictly to changes in practice. Second, three years may not be enough time to see a real difference in outcomes even after the bundles are widely adopted. In spite of the lack of change in national numbers, we have good evidence that instituting maternal hemorrhage protocols can have a real impact on maternal morbidity and mortality.10-12 California mandated the incorporation of the hemorrhage bundle in all birthing centers several years ago and was able to demonstrate differences in severity of hemorrhage, transfusions required, and possibly even in emergency hysterectomies performed.13

When we take a closer look at the Center for Disease Control and Prevention’s (CDC) Pregnancy Mortality Surveillance System, we are able to identify a striking pattern in mortality, similar to those of the NCHS: many minority groups, specifically Non-Hispanic Black and non-Hispanic American Indian/Alaska Native women, experiencing higher MMRs (40.8 and 29.7, respectively) than all other racial/ethnic groups.14 Many blame this disparity on poverty, lack of education, limited access to prenatal care, and general poor physical and mental health. But even when investigators control for education and socioeconomic status, Black women remain at higher risk for mortality. In fact, African American women with relative social and economic advantages, such as a college degree, have considerably higher risks of adverse outcomes in pregnancy than white women without such advantages.15 Researchers and clinicians have struggled to explain the striking disparity for Black women. One theory is that chronic stress from unrelenting systemic racism experienced by Black women in this country creates a physiological strain which leads to hypertension and/or pre-eclampsia, which we know leads directly to higher rates of maternal death.16 In other words, the everyday stressors experienced simply by being a Black woman in America increase the likelihood of experiencing illness and dying from it, and this extends to the pregnancy and postpartum periods. Racism is also experienced as a result of implicit bias, causing health care workers to ignore legitimate concerns and symptoms in Black patients.17 Sometimes the pain is vague or the symptoms are unclear, but they may be the critical warning signs clinicians need to appreciate and act upon in order to prevent the next maternal mortality.

In addition to concerns over racial disparities, new attention has focused on opioid-use disorders and mental health and suicide-related deaths. Unfortunately, the CDC does not include deaths due to overdose or self-harm when reporting maternal mortality, considering these deaths pregnancy-associated, rather than pregnancy-related. Therefore, most of our knowledge on these topics is limited to information collected from the death certificate, and it is difficult to ascertain whether injury deaths such as drug overdoses, suicides, and homicides occurring during pregnancy or within one year postpartum should be considered pregnancy-related. The opioid overdose epidemic has been identified as a major cause of mortality in both men and women in this country, and pregnant woman may be at particular risk. Between 2007 and 2016, pregnancy associated mortality resulting from overdose of medication more than doubled.18

Last year, a retrospective, population-based cohort study following over a million women who delivered a live-born infant in California hospitals demonstrated deaths caused by drugs was the second leading cause of death (3.68 per 100,000 person-years) and suicide was the seventh leading cause (1.42 per 100,000 person-years) in the postpartum period. In this instance, the United States is not alone. The United Kingdom has reported suicide as their primary cause of postpartum pregnancy-associated death,19 and Japan has struggled with mental health and suicide for many years.20

As opioid dependency increases, we, as anesthesia professionals will be managing patients who abuse opioids and consequently develop opioid tolerance and hyperalgesia. Women with opioid dependency often report higher pain scores postpartum than those in the general obstetric population; it is essential that clinicians are aware that despite the higher dose requirements, opioid-dependent women are not immune to the sedative effects of opioids. The anesthesia professional faces a challenging balance between adequate analgesia and sedation and respiratory depressant effects. Women with substance abuse are at increased risk of needing a cesarean delivery, requiring a blood transfusion, and death.21 Conversely, women who are opioid-naïve have a small risk of becoming dependent on opioids if their clinician prescribes postpartum opioids after discharge. Vulnerable patients include those with a history of psychiatric illness, use of other illicit substances, and chronic pain disorders such as headache or chronic back pain. Caregivers must become aware of attributes that place patients at risk and emphasize multimodal pain management to limit opioid administration.22

These new findings underscore that first, we must support the CDC and other maternal mortality committees to look beyond traditional causes of maternal death and include pregnancy-associated deaths in their data. If we do not count those deaths, it is impossible to prevent them. Second, more must be done to address mental health and substance abuse as it relates to maternal health overall.

Despite widespread awareness that the United States MMR is the highest among high-resource countries, and concerted efforts are underway on a national scale to make real changes, the latest NCHS and CDC numbers reveal a continued worsening in our MMR.8 Perhaps our mothers are older and sicker than others across the world, or perhaps our statistics are lagging and we will see an improvement in our numbers over the next decade. Either way, we cannot become complacent and stop with a hemorrhage bundle. As anesthesia professionals, we should continue to take an active role in implementing all maternal bundles. Now, more than ever, we must act as peripartum clinicians and participate with other caregivers to optimize maternal safety.

Jennifer Banayan, MD, is an associate professor in the Department of Anesthesiology at Northwestern University.

The authors have no conflicts of interest. Jennifer Banayan is associate editor of the APSF Newsletter.