The following information is a limited overview of competent adult patients’ right to refuse blood and blood products based on their religious beliefs. The right to refuse medical treatment is a very complex area of the law. It should be noted that this overview is not intended as legal advice. Statements of law and legal opinion should be carefully reviewed considering more recent statutory enactments and case law. Also, different standards may apply depending on the jurisdiction in which you practice. 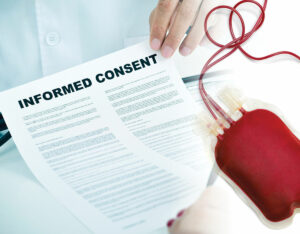 The right to refuse medical treatment is generally based on the common law right of self-determination of one’s body, the ethical principle of respect for autonomy,1 and the doctrine of informed consent.2 Further, the right to refuse treatment has also derived from a federal and state constitutional right to privacy.3 The United States Supreme Court has also held that a competent person has a liberty interest in the Due Process Clause in refusing any unwanted medical treatment.4 The right to refuse medical treatment may also be based upon the freedom of religion.5 Competent patients have the right to refuse any medical treatment, including blood and blood product transfusions, for themselves.6 Accordingly, a competent adult patient who does not want to receive blood or blood products should be required to sign a release that explains the risks inherent in refusing treatment and holds harmless any health care providers, hospital, facility, and any of their employees and agents from all liability arising out of the refusal of treatment. However, as the following case study highlights, even when competent adult patients or their legal representatives are provided with comprehensive informed consent discussions of the risks of refusing blood and blood products and those communications are documented in the medical record, that does not necessarily prevent litigation from being filed against those health care providers in the event of patient injury or death.

A 54-year-old male patient with a history of nausea, fatigue, and multiple syncopal episodes arrived via ambulance at the hospital emergency department. The patient was a Jehovah’s Witness and advised his providers he did not want to receive blood or blood products. His hemoglobin (Hgb) was 9.5.

After the patient was observed for approximately six hours, the clinical decision unit determined the patient should undergo esophagogastroduodenoscopy (EGD). While preparing for that procedure, the patient experienced hypotension and an increased heart rate upon attempting to stand. Because of this episode and his decreasing Hgb, an intensive care unit (ICU) consult was ordered.

The ICU staff evaluated the patient and noted that he was more hemodynamically stable while he was lying down. A progress note entered by the ICU attending indicated the gastroenterologist discussed the endoscopy with anesthesia but stated that “anesthesia determined the patient is currently too unstable to undergo the procedure at this time.” An ICU resident documented that he called the anesthesiologist and discussed the case, but the anesthesiologist was unwilling to take the patient for the endoscopy. The ICU staff then administered IV fluids in an effort to stabilize the patient for EGD, but his condition worsened over the next few hours.

An emergent EGD was ultimately performed bedside on the day of admission. The EGD revealed clotted blood in the gastric fundus and a bleeding ulcer in the intestine, which were coagulated by the endoscopist.

The following day the patient’s condition deteriorated, and he became more hemodynamically unstable; his Hgb dropped to 3.5, and he was intubated and sedated. An exploratory laparotomy was performed, and a 2-cm oozing ulcer was found on the medial wall of the duodenum. The ulcer was sutured and over-sewn by the surgeon. Another anesthesiologist administered the general anesthetic for the second procedure. He noted that the patient’s power of attorney (POA) consented to the surgery and again refused blood products. The anesthesiologist noted in the preanesthesia evaluation that he informed the POA that without blood transfusion, the patient would probably not survive the surgery. The patient was assessed as an American Society of Anesthesiologists Physical Status 5E.

On the following day, the patient was administered 5 units of Hemopure®, a blood alternative, which increased his Hgb to 4.5. The patient survived the procedure and was returned to ICU. However, the patient went into cardiac arrest later that morning; resuscitation efforts were aborted following a discussion with the patient’s mother, and he expired.

The patient’s mother sued the emergency room physician, ICU resident, ICU physician, gastroenterologist, anesthesiologist, and the hospital. The plaintiff alleged the defendants breached the standard of care by failing to treat the patient’s internal bleeding in a timely manner.

Plaintiff alleged the defendants should have performed the EGD and laparotomy sooner. Plaintiff retained three experts to support her theory: an internal medicine expert, a gastroenterology expert, and an anesthesiology expert. All three experts opined that the defendants breached the standard of care by failing to treat the patient before his blood count dropped so low.

The defendants moved for summary judgment disposition under state law.* The defendants argued that, even if defendants were negligent, the doctrine of avoidable consequences precluded the plaintiff from recovering an award. Defendants noted that, under the doctrine of avoidable consequences, a party could not recover for losses that they could have avoided through reasonable effort or expenditure. The defendants argued that the patient could have avoided death had he accepted a blood transfusion—a minimally invasive treatment with little risk.

The trial court granted the defendants’ motion for summary judgment. The court ruled that by rejecting a blood transfusion, the patient had failed to take advantage of objectively reasonable means to avoid the consequences of the defendants’ alleged negligent conduct. The court found that the blood transfusion was a minimally invasive procedure and that all three of the plaintiff’s expert witnesses agreed that it would likely have saved the patient’s life. Plaintiff appealed the trial court’s decision to the state’s court of appeals. The court of appeals affirmed the lower court’s ruling resulting in the final dismissal of this litigation.

The right to refuse medical treatment generally is a very complex area of the law. Due to conflicting legal precedents, the validity of the refusal of treatment depends on the patient’s situation. For example, if the patient is a minor, courts have generally ordered that blood transfusions be administered in life-threatening cases over the objections of parents who based their decision on religious grounds. State laws vary and are less clear for a minor in a less than life-threatening situation. If the minor is a teenager, joint refusal of the patient and the parents would likely be valid. 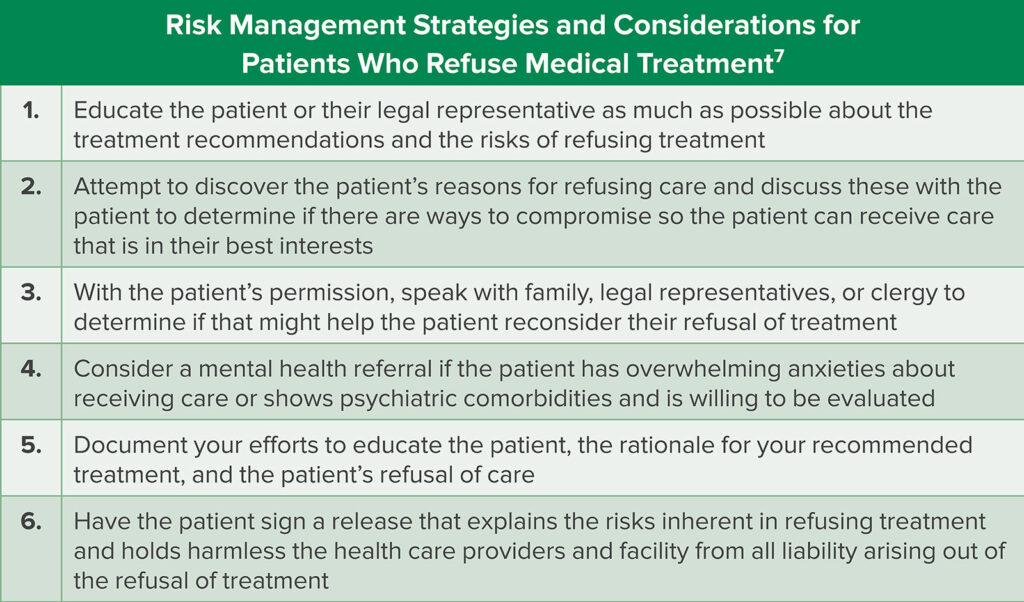 For these reasons, anesthesia and other health care professionals should seek the advice and assistance of legal counsel when caring for a patient who refuses medical treatment (Table 1). Also, hospitals and facilities need to develop a response in advance of a medical emergency because of these same complexities. If procedures are not already in place, it may be impossible to marshal the necessary resources within the time required by a medical emergency.

*Grounds for summary judgment disposition vary pursuant to federal and state law. The grounds for the summary judgment motion being granted in this case were, “the opposing party has failed to state a claim on which relief can be granted,” and “there is no genuine issue as to any material fact, and the moving party is entitled to judgment as a matter of law.”