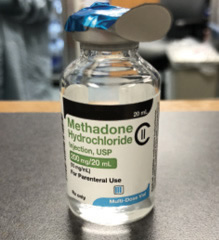 Methadone, a drug that was initially developed in 1946, has a number of unique properties compared with other opioid analgesics, which give it an increasing role in the perioperative period. It has been one of the most extensively studied drugs in medicine, with over 15,000 PubMed citations. Methadone is primarily recognized and studied as a replacement treatment for heroin addiction. Despite the large number of investigations of this unique opioid, there have been only a limited number of clinical trials of methadone in surgical patients. The aim of this review is to examine the potential advantages of methadone as a perioperative analgesic agent, particularly in the context of the current opioid epidemic in the United States and other nations.

Over the past four decades, there has been a trend in the operating room towards the use of opioids with shorter half-lives and duration of effect, such as fentanyl, sufentanil, and remifentanil. Patients are then often transitioned to agents with longer half-lives (hydromorphone, morphine) for postoperative pain management. These postoperative opioids are delivered either via intermittent injection or through a patient controlled analgesia (PCA) device. The primary problem with this mechanism of delivery is that significant fluctuations in serum opioid concentrations can occur, resulting in effects which range from inadequate analgesia (pain and activation of the PCA) to overdosage and respiratory depression. These “peaks and valleys” of pain control that occur with intermittent narcotic administration may explain why a large percentage of surgical patients report moderate-to-severe pain during the first 1–3 postoperative days (POD).1 Furthermore, poor analgesic control may be associated with increases in morbidity and mortality, lower patient satisfaction, and the development of chronic postsurgical pain.

Methadone is a unique opioid that may provide several important potential benefits for the patient in the perioperative period. It is a potent μ-receptor agonist with a rapid onset (6–8 minutes) and the longest half-life (24–36 hours) of the clinically-used opioids.2 When used in larger doses, the clinical effect is terminated by systemic elimination. As reviewed in an editorial by Evan Kharasch, methadone dosing should be as high as possible above the minimal analgesic concentration, but below the threshold for respiratory depression; at doses of ≥ 20 mg, the duration of analgesia approximates the half-life of 24 to 36 hours.2 Therefore, a single 20-mg dose administered to an adult at induction of anesthesia can provide significant pain relief throughout the first 1–2 POD.2 In addition to providing long-lasting and stable analgesia throughout the most intense period of postoperative pain, methadone is a N-methyl-D-aspartate (NMDA) receptor antagonist. It has been reported to possess anti-hyperalgesic and anti-allodynic properties, to inhibit the development of tolerance, and to be effective in the treatment of neuropathic pain; these properties are likely mediated by the ability of methadone to block the NMDA receptor.3-5 Finally, methadone has been demonstrated to decrease the reuptake of serotonin and norepinephrine in the brain, which may contribute to a mood-elevating effect of the agent and influence the affective dimensions of pain processing. However, this feature also increases the risk of serotonin syndrome in patients taking other medications that inhibit serotonin reuptake.6

The first clinical trials of methadone were performed in Australia in the 1980s. Gourlay et al. administered 20 mg of methadone to 23 healthy adult patients undergoing abdominal or orthopedic procedures at induction of anesthesia.7 Nine patients (39%) required no additional postoperative analgesic agents, 6 patients (26%) requested non-narcotic pain medication, and 8 patients (35%) required an opioid agent postoperatively, but the mean duration of analgesia was 18.4 hours. In an additional trial, 16 adult patients undergoing a variety of procedures were given 20 mg of methadone at anesthesia induction.8 Subjects were administered additional methadone in the postanesthesia care unit (PACU) until they were comfortable as long as they met all of the following criteria: 1) that the patient complained spontaneously of significant pain; 2) that there was no pronounced respiratory depresssion (unstimulated respiratory rate greater than 10 breaths per minute); and 3) there was no marked depression in the level of consciousness. One to three supplemental doses of methadone were given in the PACU (median total dose of 10 mg). The subsequent duration of analgesia was 21 hours, with reported mean pain scores of 1.5 on a scale of 1–10. A further study by the same investigators randomized 20 adult patients undergoing abdominal surgical procedures to receive either 20 mg of methadone or morphine at the induction of anesthesia.9 Subjects were then given either 5 mg of methadone or morphine (blinded syringes) in the PACU until comfortable after meeting the same three criteria as their previously mentioned study. Both groups required 8–9 mg of either opioid in the PACU; however, the mean duration of analgesia was 21 hours in the methadone group versus 6 hours in the morphine group. No adverse events were reported in the patients administered methadone.

No further clinical trials were published examining methadone use in the perioperative period until the early 1990s. In these studies which assessed the utility of methadone in gynecologic, pediatric, and abdominal surgery patients, a reduction in pain scores and analgesic requirements was noted in patients administered methadone.10-12However, these investigations were limited by lack of blinding, randomization, small sample sizes, or lack of standardization of perioperative anesthetic management techniques.

In 2011, Gotttschalk et al. published a study in which 30 adult patients were randomized to receive either methadone (0.2 mg/kg at induction) or sufentanil (bolus and infusion) for complex spine surgery.13 At 48 hours, methadone reduced postoperative opioid requirements and pain scores by approximately 50%. The same year, investigators from Washington University examined the pharmacokinetics of methadone in 31 adolescent patients undergoing complex spine surgery randomized to receive 0.1, 0.2, or 0.3 mg per kg of methadone, up to a maximum of 20 mg.14 The investigators found that methadone pharmacokinetics were linear over the dose range studied. Although pain scores did not differ between groups, the study was not powered to examine this secondary outcome.

Murphy et al. randomized 156 patients undergoing cardiac surgery to receive either methadone (0.3 mg/kg) or fentanyl (12 μg/kg) at the start of surgery.15 Postoperative intravenous morphine requirements in the methadone group were reduced by 40% during the first 24 hours after tracheal extubation. In addition, pain scores were decreased by 30 to 40% and patient-perceived quality of pain management was significantly improved during POD 1–3 in the methadone group. In a similar study enrolling 120 patients undergoing complex spine surgery, subjects were randomized to receive either 0.2 mg/kg of methadone at the start of surgery or 2 mg of hydromorphone at the end of surgery.16 Patients in the methadone group required significantly less intravenous and oral opioid medication, reported lower pain scores, and had improved global satisfaction with pain management during the first three PODs, compared to subjects given intraoperative hydromorphone. No adverse events directly attributable to methadone were reported in any of previous seven investigations, though most studies were not adequately powered to detect opioid-induced ventilatory impairment.

Although methadone appears to be an effective and safe opioid for use in the perioperative period, a number of important questions remain that need to be addressed in future investigations:

1. What is the most effective analgesic dose of methadone?

Only one dose-response study has been performed using methadone in surgical patients.14 In the majority of clinical investigations, a dose of either 20 mg or 0.2 mg/kg has been administered. It is possible that larger doses may result in more effective analgesia, although the resultant risk of respiratory depression may be higher.

2. What is the most appropriate dose of methadone for patients undergoing various surgical procedures?

3. Which patients are at risk for complications related to the administration of methadone?

4. Is methadone safe for use in outpatients?

The appropriate dosing requirements and safety of methadone in outpatient procedures has not been determined, although studies are currently underway.

5. Does a single dose of methadone cause QT prolongation?

Patients receiving large doses of oral methadone for longer periods of time are at risk for QT prolongation, torsades de pointes, and cardiac death. The effect of a single dose of methadone on the risk of QT lengthening and torsades de pointes has not been examined, although no adverse cardiac events related to methadone administration have been described in clinical trials or case reports.

6. Can intraoperative methadone reduce the risk of the development of chronic postsurgical pain?

Methadone has the potential to reduce chronic postsurgical pain by decreasing pain in the first 1–3 POD and via antagonism of the NMDA receptor. The effect of this agent on chronic postsurgical pain has not yet been determined. In addition, it is possible that the risk of postoperative opioid addiction may be reduced if acute and chronic pain is attenuated when methadone is administered (patients will have reduced postoperative opioid requirements). In addition, the NMDA blocking properties of this opioid result in anti-hyperalgesic and anti-allodynic effects and may inhibit the development of tolerance; this may further diminish the need for opioid treatment after surgery and lessen the narcotic dependence.

7. Is methadone use in the operating room associated with a greater risk of postoperative respiratory depression compared to other opioids?

At the present time, no adverse respiratory events related to methadone use have been described in the clinical trials. However, the studies are limited by small sample sizes and a lack of close postoperative respiratory monitoring to assess the incidence of hypoxemic events and airway obstruction. Further studies are needed to assess this important outcome measure. Furthermore, due to the long half-life of methadone, if a patient exhibits opioid-induced respiratory depression, a naloxone infusion may be required, as the half-life of methadone (24 hours) is significantly longer than that of naloxone (60 minutes).

In conclusion, methadone is a long-acting opioid with promising applications in the perioperative setting. Further studies are needed to define the optimal dose of this agent and which surgical patients may derive the greatest benefit from its administration in the operating room.

Dr. Murphy discloses that he is on the advisory board of Merck and has served as a consultant for Merck. Dr. Szokol has no conflicts of interest to disclose.

The opinions expressed in this article are not necessarily those of the Anesthesia Patient Safety Foundation. The APSF neither writes nor promulgates standards, and the opinions expressed herein should not be construed to constitute practice standards or practice parameters. Validity of opinions presented, drug dosages, accuracy, and completeness of content are not guaranteed by the APSF.