We present two cases of thermal injuries resulting from use of a convection warming system. In both cases, the "Over Temperature" audible and visual alarms did not activate. In one of the cases, the air manifold piece was inadvertently missing. We ask the manufacturer, Smiths Medical, to opine on these cases and offer suggestions for anesthesia professionals regarding the safe use of convection warming devices. In addition, we highlight the clinical challenges associated with some of the recommendations in the Operator's Manual.

Two consecutive patients suffered similar thermal injuries to the upper extremity and chest after the use of a convective warming system. Both patients underwent a laparoscopic robotic prostatectomy in the Trendelenberg position with the arms tucked. The cases were performed sequentially in the same operating room, with the same personnel. In both cases, a Smiths Medical EQUATOR® Level 1® Convective Warming System was used in conjunction with the Snuggle Warm® Small Upper Body Convective Warming Blanket. The upper body warming blanket was secured to the patient with the built-in adhesive strip, placed just caudad to the nipple line. No additional blankets were placed on top of (or underneath) the warming blanket. The “arms” of the warming blanket were tucked into the crease between the operating room table and cushions since the patient’s arms were tucked. The hose was then connected to the warming blanket at the blanket port connection near the left shoulder, and the hose suspended with a retaining clip (Figure 1). Of note, in one of the cases, it was confirmed that the air manifold was inadvertently missing. The air manifold is an “elbow” shaped plastic tube connected to the end of the warming hose, with several openings on the distal end designed to evenly disperse warm air over the patient (Figure 2, Panel A). The warming device was set to a temperature of 44° Celsius (high setting) throughout both cases. Intraoperatively the warming device appeared to function normally, without audible or visual alarms. Both patients were hemodynamically stable and normothermic by nasopharyngeal temperature monitoring throughout. In recovery, both patients were noted to have diffuse erythema on the left upper extremity and chest, in close proximity to the site of the blanket port connection. On postoperative day one, blistering developed on the shoulder and chest of both patients (Figure 3), which ultimately resolved with conservative management. 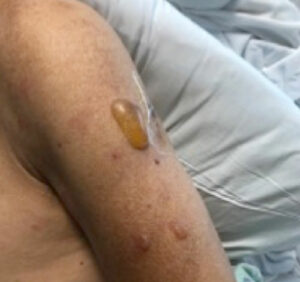 Figure 3: Blisters noted on post-operative day one (patient consent obtained for use of this image).

Thermal injuries are rare when manufacturer’s instructions are followed.3 When thermal injuries do occur, they are often the result of improper use of the device.4-6 The most common form of improper use occurs when the hose is positioned on or adjacent to the patient’s skin, without the use of a warming blanket. The Smiths Medical EQUATOR® Level 1® Convective Warming System is equipped with several safety features to reduce the risk of thermal injury, including “Over Temperature” alarms, a maintenance indicator, and an occlusion indicator.

In the cases presented here, the cause of the thermal injury remains under investigation. The pattern of injury suggests a focal area of overheating at the point where the hose connects to the warming blanket. We believe there could have been a faulty “Over temperature” alarm. According to the Operator’s Manual, “the safety thermistor activates and alarms if the temperature reaches 3° Celsius above set point…the circuit provides an independent means of shutoff, which discontinues power to the heater and blower.” Though many factors contribute to the development of a thermal injury (temperature, duration of exposure, etc.), one potential explanation in these cases could be that the temperature of the air was higher than the alarm set point of 47° Celsius. Another possible contributing factor is the inadvertent absence of the air supply manifold (confirmed in one of the cases). According to the Operator’s Manual, the air manifold “distributes the warmed air to delivery channels in a pattern designed to promote heat transfer to the patient… perforations on the patient side of the air delivery channel gently disperse warm air over the patient thereby maintaining patient temperature”. The absence of the air manifold likely resulted in the concentrated delivery of warmed air onto a small surface area of the patient, explaining the pattern of injury. Since two identical devices were present in that operating room on the day of injury, both devices were returned to Smiths Medical for further investigation (even though we suspect the same device was the culprit for both cases). The results of their investigation are ongoing.

These cases provide an opportunity to open a dialogue with Smiths Medical in an effort to improve patient safety. First, we ask that Smiths Medical comment on the importance of the air manifold. Figure 2 demonstrates how the hose and air manifold can be disassembled, and how the hose is capable of connecting to the warming blanket directly, without the air manifold. If the air manifold piece is critical to the safe function of the device, why is it removable? If it must be removable, should there be a circumferential “warning label” visible on the end of the hose to alert the user to the potential danger of connecting directly to the blanket port (Figure 2, Panel C)? Alternatively, has the manufacturer considered a “forcing function” that would prevent the hose from connecting to the blanket port without the use of the air manifold (i.e., akin to the way a diesel fuel pump cannot be inserted into a regular fuel tank)?

Next, we ask Smiths Medical to reply to several questions regarding the Operator’s Manual for the EQUATOR® Level 1® Convective Warmer, which contains an extensive list of warnings intended to avoid patient injury. Many of these warnings are intuitive and are part of routine care, but some of them are difficult to reconcile with the realities of clinical care, as discussed below:

“To prevent thermal injury, do not use the highest temperature setting when treating patients who have decreased sensation, are nonsensate, or have poor perfusion.”

The convection warmer is commonly started at the highest setting to prevent rapid heat loss from radiation, conduction, convection, and evaporation. Does the manufacturer advise against this practice? If so, are there any exceptions where starting on the high setting would be justified (e.g., a trauma patient with large surgical exposure at risk for significant hypothermia and associated coagulopathy)? Is there a minimum required time at each setting before escalating to the next?

“…Observe cutaneous response at regular intervals to prevent thermal injury. If erythema or instability in vital signs is evident, decrease the temperature setting or discontinue use of the convective warming therapy.”

Recognizing a developing thermal injury can be difficult or impossible for even the most vigilant anesthesia professional, because clinical signs may not be present until well after the injury has occurred. In addition, the site is often inaccessible or covered by the warming blanket itself or the surgical drapes. Furthermore, the lighting in an operating room may be dimmed, making detection of subtle erythema challenging.

The manufacturer’s suggestion that instability in vital signs warrants discontinuation of the warming therapy likely oversimplifies the complex physiological perturbations during anesthesia and surgery. The differential diagnosis of intraoperative vital sign instability is broad, and discontinuation of the warming therapy may be contraindicated in certain situations (e.g., a patient who is hypotensive due to hemorrhagic shock, in which coagulopathy may be worsened by hypothermia).

“To prevent thermal injury, do not allow any of the patient’s body parts to rest on the active hose inlet”

The design of the Snuggle Warm® blanket inherently places the active hose inlet in close proximity to the patient’s shoulder. Has the manufacturer considered modifying the design of the warming blanket, so that the connection port is more distant to the patient (i.e., creating an “elephant trunk” type extension)? When the patient’s arms are positioned at their side, it is common practice to tuck the edges of the upper body warming blanket into the crease between the operating room table and the cushions. Does this practice restrict airflow and increase the risk of thermal injury? If so, what recommendations does the manufacturer have for upper body blanket use in a patient with the arms tucked?

Our department has taken widespread measures to raise awareness of these safety concerns, and issued the following recommendations to anesthesia team members:

We invite Smiths Medical to respond to this report, and welcome their suggestions regarding the safe use of convective warming systems.