An increasing supply problem with lipid emulsion propofol has forced many practices to revert to alternative sedative-hypnotics that do not provide an ideal intraoperative and recovery profile to anesthesia practitioners using propofol. Fospropofol (Lusedra®) is a water-soluble, non-pyrogenic, iso-osmotic pro-drug sedative-hypnotic agent that is metabolized to propofol, and, if dosed appropriately, may be an alternate drug selection to propofol in some patients undergoing monitored anesthesia care (MAC). Fospropofol, released in November 2009 by Eisai, Inc., has a limited indication of MAC sedation in adult patients undergoing diagnostic or therapeutic procedures. The drug does not provide an approved complete propofol replacement but allows clinicians to reserve limited lipid emulsion propofol supplies for patients requiring general anesthesia. The FDA also placed a Schedule IV restriction on fospropofol, satisfying concerns raised by the ASA and AANA regarding the scheduling status of propofol.

Unlike propofol, there are no shortages of fospropofol; however, the anesthesia community has had limited clinical experience with the drug. It is important to understand that while the pro-drug becomes propofol after metabolism by alkaline phosphatases, there are significant differences in dosing, packaging, onset, peak effects, and duration of action. The pro-drug does not produce any burning or pain at the site of IV injection, but a released phosphate metabolite may be responsible for frequent but transient mild to moderate perineal paresthesia (52-74%) or pruritis (16-28%) that patients report 1-5 minutes after injection of fospropofol loading boluses. Despite this reaction, 95% of fospropofol study patients were willing to receive the treatment again. Staff and patient education may also help minimize misinterpretation of these symptoms. 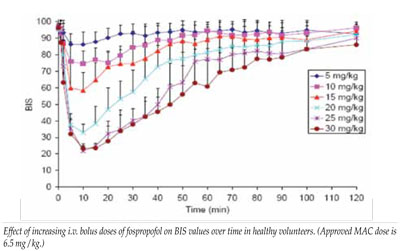 Fospropofol, once metabolized to propofol, is comparable to propofol lipid emulsion; however, the delayed liberation of propofol from fospropofol results in differences in onset and duration of sedation effects. Clinical studies have demonstrated that sedation onset and peak sedation effect from the initial fospropofol bolus is metabolically delayed 1-8 minutes as is the peak effect. Supplemental doses (calculated as 25% of the initial dose) administered to achieve deeper initial levels of sedation must not be administered more frequently than every 4 minutes to permit metabolism of the drug to release active propofol; this may help prevent over-sedation from a dose-stacking process.

The first trial using the approved MAC fospropofol dosing routine was a double-blind, multicenter study that evaluated safety and efficacy of IV bolus fospropofol for moderate sedation in patients undergoing colonoscopy.1 One hundred and forty-nine adults (97% ASA PS1-2 and 87% <65 y/o) were randomized to receive the recommended fospropofol 6.5 mg/kg dose after pretreatment with IV fentanyl 50 mcg. Supplemental doses of fospropofol were permitted every 4 minutes to achieve a Modified Observer’s Assessment of Alertness/Sedation (MOAA/S) six-point scale score of ≤4 (lethargic response to their name spoken in a normal tone) prior to colonoscope insertion. The median time to sedation was 8 minutes, median procedure duration 11 minutes, and median time to alert at the end of the procedure was 5 minutes. The number of supplemental doses averaged 2.3 (±1.4 SD) doses.

The second clinical trial was a randomized, double-blind, multicenter study evaluating fospropofol in patients undergoing sedation for flexible bronchoscopy.2 In this trial, 150 patients ASA PS2-4 (46% ASA P3-4 and 41% ≥65 y/o) received the approved dose of 6.5 mg/kg after pretreatment with fentanyl 50 mcg. Supplemental doses of fospropofol were given no more frequently than every 4 minutes to achieve or maintain adequate sedation. The median time to sedation was 4 minutes, median duration of the procedure 11 minutes, and median time to full alertness was 5.5 minutes. The number of supplemental doses averaged 1.7 (±1.6 SD). Deep sedation (MOAA/S 0-1) occurred in 16% of the 6.5 mg/kg treated patients with an average duration of 3.7 minutes (range 2-20).

The final study completed to date was a prospective open-label non-randomized trial in 123 minor surgical procedures including EGD, arthroscopy, hysteroscopy, bunionectomy, TEE, and others.3 All patients received a dose of 6.5 mg/kg or the Modified Dosing Regimen if they were ASA PS3-4 (19%) or ≥65 y/o. The majority of procedures took less than 30 minutes to complete. Fospropofol was found to provide a very safe and effective MAC anesthetic technique with the most frequent adverse events again being transient self-limited paresthesias and pruritus.

The incidence of adverse events is summarized in the table below. As expected, a greater rate of sedation-related adverse events necessitating an intervention was observed in the bronchoscopy patients compared to the other two trials. 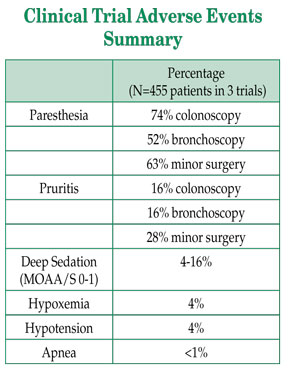 Early adopters of fospropofol have questioned the adequacy of the approved initial 6.5 mg/kg bolus dose of because of the documented frequency of required supplemental doses and the 4-8 minute median time-to-sedation. Prior trials provide limited data with fospropofol at higher doses. Twelve healthy subjects administered 10 mg/kg achieved peak plasma levels of propofol released from fospropofol of 2.2 ± 0.4 mcg/mL at 8 min (range 4-13 min) and the minimum mean MOAA/S score reached 1.2 (range 0-3) at 7 min (range 1-15). MOAA/S of 2 = “responds only after mild prodding or shaking;” MOAA/S of 1 = “responds only after painful trapezius squeeze.” Subjects were sedated longer and recovered from the sedative effects of this dose between 21-45 minutes after fospropofol administration.

The lower 6.5 mg/kg dose was selected for MAC sedation to minimize the incidence of deep sedation and sedation-related adverse events. The most common adverse events, paresthesias and pruritus, were transient and self-limited. As with all sedative-hypnotics, fospropofol may produce additive cardio-respiratory effects when administered with benzodiazepines and opioids. Study patients were not premedicated with a benzodiazepine and only received fentanyl 50 mcg prior to the fospropofol. Other sedative-hypnotics or inhalational anesthetics have been studied in combination with fospropofol.

Neither the dosing required nor the safety of fospropofol used for continuous IV infusion sedation has been well studied. Although the PI lists no specific contraindications to fospropofol for MAC sedation in adults, several additional safety points should be reviewed. Fospropofol is Pregnancy Category B and there are no adequate and well-controlled studies in pregnant women; therefore, fospropofol is not recommended for use in labor and delivery, including cesarean section deliveries, or for use in nursing mothers. Fospropofol has not been studied in pediatric patients <18 years of age. No formal studies of the abuse potential of fospropofol have been conducted, but euphoria was reported in a small number of subjects who received IV or oral dosing. There is no reversal agent known for fospropofol, and any overdosage can cause cardiorespiratory depression requiring manual or mechanical ventilation and cardiovascular resuscitation.
Fospropofol, 35 mg/mL (total of 1,050 mg/30 mL) fospropofol disodium, is supplied as a single-use, aqueous, clear, colorless solution that is compatible with most IV solutions but may precipitate when mixed with midazolam or meperidine. Additional information is available at the company website:
www.lusedra.com

There may be compelling reasons to consider fospropofol as an alternative sedative-hypnotic for MAC sedation procedures in adults where propofol is the preferred agent. There are significant differences in dosing routines, onset and peak sedation effects. Previous clinical trials and approved bolus doses of fospropofol provide a mild-moderate depth of sedation with minimal sedation-related adverse events. Larger initial bolus or supplemental dosing can increase the depth and speed of onset of sedation but will significantly prolong duration. Fospropofol’s pharmacokinetic and effect differences may work well for certain MAC procedures and should require less frequent redosing during the procedure without the need for an infusion pump.

Disclaimer: Dr. Leslie presented the review of fospropofol risks/benefits at the FDA Advisory Board review and has presented clinical research, educational reviews, and CME lectures that included information on fospropofol. He is currently working on an investigator initiated clinical trial with fospropofol that is funded by a grant from Eisai, Inc. Eisai, Inc. is a financial supporter of the APSF.