Our department was recently contacted to investigate a possible issue in the Datascope AS3000 Anesthesia System (Mindray North America, Mahwah, NJ), which is one of the manufacturers of anesthesia machines that measure breathing circuit pressure only in the expiratory limb. During testing of the system by engineers at GE Healthcare (Madison, WI), it was found that producing a complete occlusion of the expiratory limb at the junction of the disposable breathing circuit and the connection to the absorber during operation of the machine was not detected. Indeed, during the experimental occlusion of the expiratory limb of a circuit, the system indicated zero airway pressure and alarmed for low pressure, when in fact the circuit pressure was independently measured and found to be 63 mmHg.

In order to determine whether or not this was an event isolated to one particular anesthesia machine we asked 2 other users of Datascope AS 3000 systems to perform an experiment in which they placed a piece of plastic over the expiratory portion of the absorber and connected a disposable breathing circuit. In all instances, when the expiratory limb was occluded, the Datascope AS 3000 system’s airway pressure gauge showed zero airway pressure while the reservoir bag, used as a test lung, continued to grow larger.

We understand that other manufacturers’ machines respond in a similar fashion, and we would suggest that, in general, future anesthesia machine designs incorporate airway pressure measurements within the breathing circuit rather than in the absorber behind the one-way valves where the pressure transducer is isolated from the breathing circuit. It is not difficult to imagine a situation where the expiratory limb of a circuit may be either externally or internally occluded, and subsequent build up of fresh gas flow and ventilation with undetected high pressure could result in an untoward event.

Disclaimer: Dr. Mychaskiw is a consultant to and has received research support from GE Healthcare, Inc.

Mindray appreciates the opportunity to respond to Dr Mychaskiw’s concerns regarding the Datascope AS3000 anesthesia machine. We appreciate receiving all comments and concerns regarding our products and take these very seriously. Mindray has patient safety at the forefront of product development and recognizes the value and responsibility of providing education concerning the safe use of anesthesia delivery systems and all medical equipment.

The issue in this case involves the fact that the Datascope AS3000 measures airway pressure in the expiratory limb of the circle breathing system (see Figure 1). When the exhalation limb becomes completely occluded, as in the case of a defective breathing circuit, the pressure in the lungs is not monitored correctly either by the electronic sensor or the circle pressure gauge (see Figure 2). Many manufacturers choose to sense airway pressure only in the expiratory limb. Ironically, Dorsch and Dorsch1 state that placing the sensor on the expiratory side of the circuit has an advantage over placement in the inspiratory side of the circuit, if there is an obstruction in the inspiratory limb. 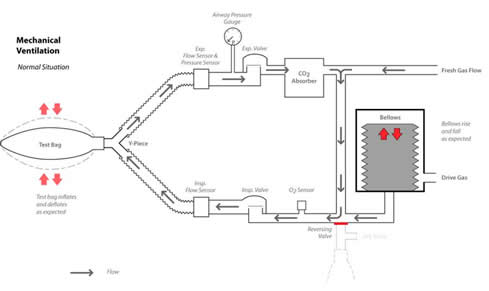 Figure 1. The Datascope AS3000 circle breathing system with inspiratory and exhalation sensors during mechanical ventilation. 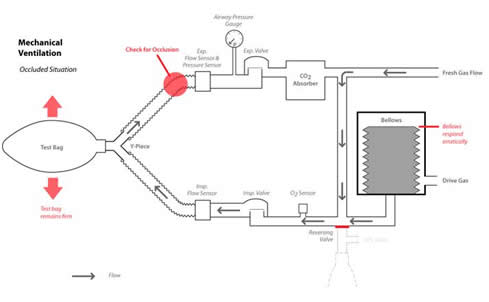 We have thoroughly investigated the issue of measuring breathing circuit pressure only in the expiratory limb during complete occlusion of the breathing circuit at the connection to the exhalation port on the absorber. It is pertinent to note that Dr. Mychaskiw’s finding came from bench laboratory studies and that no such no related adverse clinical events have ever been reported on the AS3000.

There are 2 rare but potential clinical occurrences that would fully occlude the expiratory port: 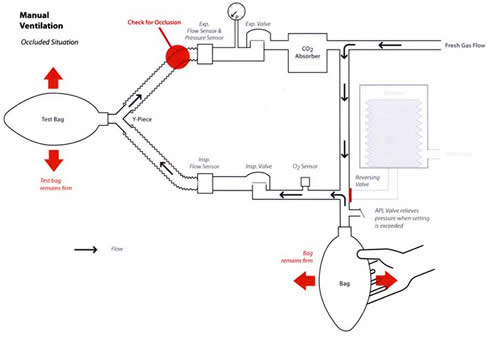 The purpose of the pre-use checkout is to detect potential problems before they impact the patient.

The manufacturers of anesthesia delivery devices all have effective safety concepts and alarm algorithms, but each manufacturer implements these differently. In this regard, the AS3000 is similar to many other anesthesia delivery systems in the United States. A simple, but effective method for detecting events like occlusion of the exhalation valve can be found in the recommended machine checkout procedures and the recommended machine checks between cases in the same room.2,3 For example, it is recommended that the breathing circuit be tested for the ability to effectively deliver positive pressure ventilation before the beginning of each case. A simple leak test by itself is of minimum value, but testing the ability to properly ventilate a test lung is essential and can quickly identify an occluded expiratory limb and other breathing circuit problems. At the start of each case, or before the start of each case to follow in that room, simply removing the breathing bag from the bag arm and connecting it to the patient connection (elbow or wye piece on the disposable circuit) will permit evaluation of the machine’s ability to ventilate the patient. The ventilator can be set to deliver a specific tidal volume to the test lung and verified by the exhaled tidal volume monitor. Observing that the test lung (breathing bag) inflates as the bellows descend, and that the test lung volume decreases during the exhalation phase, along with observing that the measured exhaled volume closely matches the tidal volume set on the ventilator, will provide a level of confidence necessary to proceed with the induction of anesthesia. With the fresh gas inflow set to minimum, or zero, if the bellows fail to rise to the same height during each exhalation then a leak should be suspected, identified, and repaired.

This simple and quick evaluation is the minimum checkout that should be performed between cases. Other published checkout procedures are somewhat more involved, and may evaluate other aspects of the machine, but making sure that a test lung (breathing bag) can be effectively manually or mechanically ventilated indicates that the patient has a high probability of being ventilated.

Specifically in the case of the Datascope AS3000:

As explained above, in the case of an occluded expiratory limb caused by a defective breathing circuit, using the checkout procedure that evaluates the ability of the machine to mechanically ventilate a test lung (the breathing bag) while the fresh gas inflow is set to zero, the occlusion would be easily recognized:

If the semi-automated checkout procedure for the AS3000 is performed while the expiratory limb is occluded, the following abnormal results will be observed:

During this condition the machine disables the ventilator and will not permit the clinician to use mechanical ventilation, until the issue is resolved and the leak test is re-run and passed.

Mindray is driven to the highest product quality and performance standards. Based on our research and testing of the expiratory limb occlusion, we feel this scenario, which was identified and duplicated in the laboratory, is a rare clinical event that would be readily detected during both the startup testing and during a normal pre-use machine check out. An understanding of specific equipment functionality and conducting the recommended pre-use pressure, leak, and flow tests will assist the anesthesia provider in identifying rare untoward events such as complete occlusion of an expiratory limb of a disposable breathing circuit. We sincerely appreciate the opportunity to interact with the anesthesia community regarding the performance of our products. Our goal is to continually enhance new product performance based upon input from clinicians.