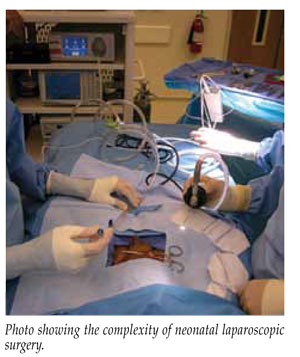 The surgical literature is replete with studies extolling the benefits of minimally invasive surgery. Indeed, for many operations its advantages over conventional techniques are well proven. Reduced pain and analgesic requirements, shorter convalescence and hospital stays, and improved cosmetic results have contributed to the popularity of laparoscopy
among surgeons and healthcare consumers alike. As the indications for laparoscopic procedures expand, often without adequate scientific studies to assess the risks and benefits, anesthesia professionals may be among the first to recognize patient safety issues. Recent reports of catastrophic events associated with neonatal laparoscopy may suggest that its popularity is unfounded for minor procedures. Although studies in the surgical literature report statistically significant reductions in hospital stay and time to enteral feeds for laparoscopic compared with open pyloromyotomy, these results are measured in hours and may be clinically and financially unimportant.

More than 30 minutes of chest compressions, intratracheal and intravenous epinephrine and blood transfusion were administered prior to return of spontaneous circulation in a 12-day-old term female infant who experienced cardiac arrest during initial insufflation of the abdomen for laparoscopic pyloromyotomy. Analysis of respiratory gases prior to the arrest demonstrated higher levels of expired than inspired nitrogen, suggesting that air emboli contributed to her arrest. Computerized tomography of the head revealed intra-arterial gas bubbles 3 hours following the arrest, which resolved following hyperbaric oxygen therapy. An MRI 5 days later showed a pattern of watershed infarct. Three years later, her development appears normal.2

A 3-week-old former 34-week premature twin experienced hypoxia and hypotension at the time of abdominal insufflation for laparoscopic pyloromyotomy that responded to volume, epinephrine, and calcium gluconate administration, without the need for chest compressions. He had a protracted hospital stay prior to uneventful open pyloromyotomy,3 without known long-term complications following his intraoperative resuscitation.

The transitional circulatory anatomy of the neonate, variations in surgical laparoscopic inflation techniques, and the equipment itself may contribute to increased risks in young patients. A bleeding umbilical vein was believed to be the source of gas embolism in the preceding cases. A patent ductus arteriosus in case 1, and patent foramen ovale in case 2, increased the likelihood of paradoxical emboli and adverse outcomes.

Numerous clinical reports and animal experiments outline the effects of CO2 embolus during laparoscopy. The importance of rate and volume, as well as solubility of a gas delivered to the circulation, is well recognized. The summarized cases suggest that the presence of ambient nitrogen may be clinically relevant, creating emboli highly refractory to treatment. Other possible causes of cardiovascular and respiratory arrest must also be considered during laparoscopic procedures. Elevated intraabdominal pressure contributes to respiratory embarrassment and compromises venous return resulting in low cardiac output. Pneumothorax and pneumomediastinum can occur when gases escape from the abdominal cavity through congenital diaphragmatic defects, retroperitoneal dissection, or injury to the falciform ligament. Vascular injuries associated with initial instrumentation of the abdomen or during dissection of solid organs may result in hypovolemic shock.4

An understanding of laparoscopic equipment and the techniques employed for insufflation will aid the anesthesia professional during adverse events. The adoption of laparoscopic equipment designed for adults without modification for pediatric surgery may bring unnecessary risk to neonates. Newer insufflation equipment does have pediatric settings that limit the maximum pressure and flow rates during insufflation. High volume tubing allows significant air contamination of insufflated gases if the tubing is not purged with CO2 prior to use. In fact, the volume of tubing in use at our institution is >200 ml, more than the volume necessary for initial abdominal insufflation in many neonatal cases. Some surgeons do not routinely purge the insufflating system of air prior to the start of laparoscopic procedures. In such cases, all or most of the original gas delivered to the body cavity is nitrogen-containing air. Unfortunately, in such cases the perceived advantage of CO2 as an insufflating gas is lost.5

It is unclear whether these cases are, indeed, extremely rare events, or if they represent a unique risk of laparoscopy in neonates whose circulatory anatomy differs from the older population. Both author and publication bias limit the number of events reported in the literature. An effort to ascertain the incidence of adverse outcomes and possible contributing factors is currently underway. The Food and Drug Administration Division of Post-Market Surveillance is interested in learning more about this safety concern. The urgency of their response, however, is determined by the frequency and severity of events, as well as the age of the patient, with pediatric patients receiving priority. Only reliable reporting will allow the medical community and regulating bodies to appreciate the true significance of such complications. Please submit any adverse events related to neonatal laparoscopy to the FDA through their MedWatch online reporting system
https://www. accessdata.fda.gov/scripts/medwatch/. Any questions regarding the submission process may be directed to [email protected] or
[email protected]

Dr. Taylor is an Assistant Professor of Anesthesiology at the Children’s Hospital of Wisconsin (Medical College of Wisconsin) in Milwaukee, WI.