This paper discusses an incident in which an equipment failure occurred in the operating room. The patient presented for direct laryngoscopy with biopsy secondary to neoplasm at the base of the tongue. Video laryngoscopy was performed with the GlideScope®. At the conclusion of the brief procedure, a foreign object was noted in the airway by the surgeon. The tip of the GlideScope® had inadvertently broken off in the patient’s airway. The patient was not harmed in this incident.

I would like to present a scenario in which the tip of a disposable GlideScope® Stat cover inadvertently broke off in a patient’s airway. Figure 1 depicts an intact Verathon GlideScope® (North Creek Parkway, Bothwell, WA) Stat cover. 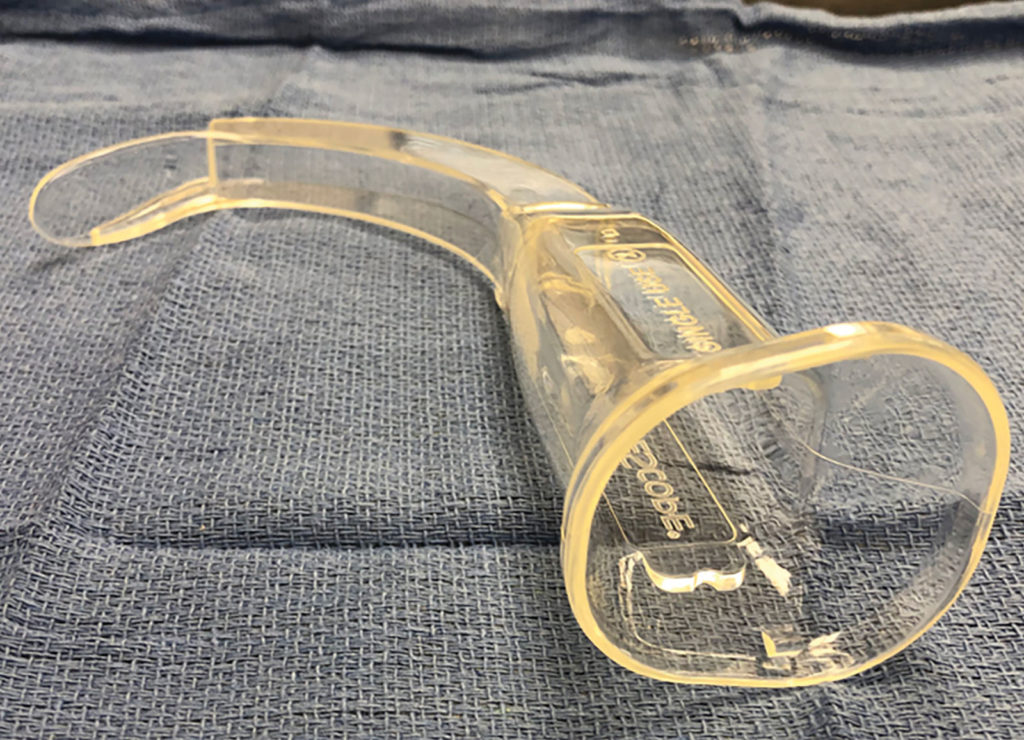 A 76-year-old, 62 in., 60 kg, ASA class 3, woman presented for an elective direct laryngoscopy with biopsy due to a neoplasm at the base of the tongue. Video laryngoscopy was performed at the request of the Ears, Nose, and Throat (ENT) surgeon with the GlideScope® positioned midline using a Stat 3 cover by the student registered nurse anesthetist (SRNA), with the certified registered nurse anesthetist (CRNA) and ENT surgeon in attendance. The surgeon assessed the airway structures and vocal cords while the GlideScope® was still in place. No other instruments were placed in the airway. Thereafter, the patient was intubated with a 6.0 endotracheal tube without complication. The correct position of the endotracheal tube was verified by presence of ETCO2 and bilateral breath sounds, and the patient was placed on volume control mechanical ventilation. The case proceeded without difficulty.

At the end of the procedure, the surgeon identified a foreign object in the airway, which was removed with graspers. After further inspection, it was obvious that the clear plastic object was the distal tip of the disposable Verathon GlideScope® Stat cover. The distal one-third of the tip of the Stat cover had fractured off in the patient’s airway (Figure 2,3). The patient was successfully extubated and transferred to the post anesthesia care unit (PACU) in stable condition. PACU recovery was uneventful. No bleeding, edema, or complaints of sore, scratchy throat were elicited from the patient. The patient was discharged to same-day surgical services without further incident. An incident report was filed with the facility’s risk management team, and the CRNA contacted the GlideScope® company about the incident. 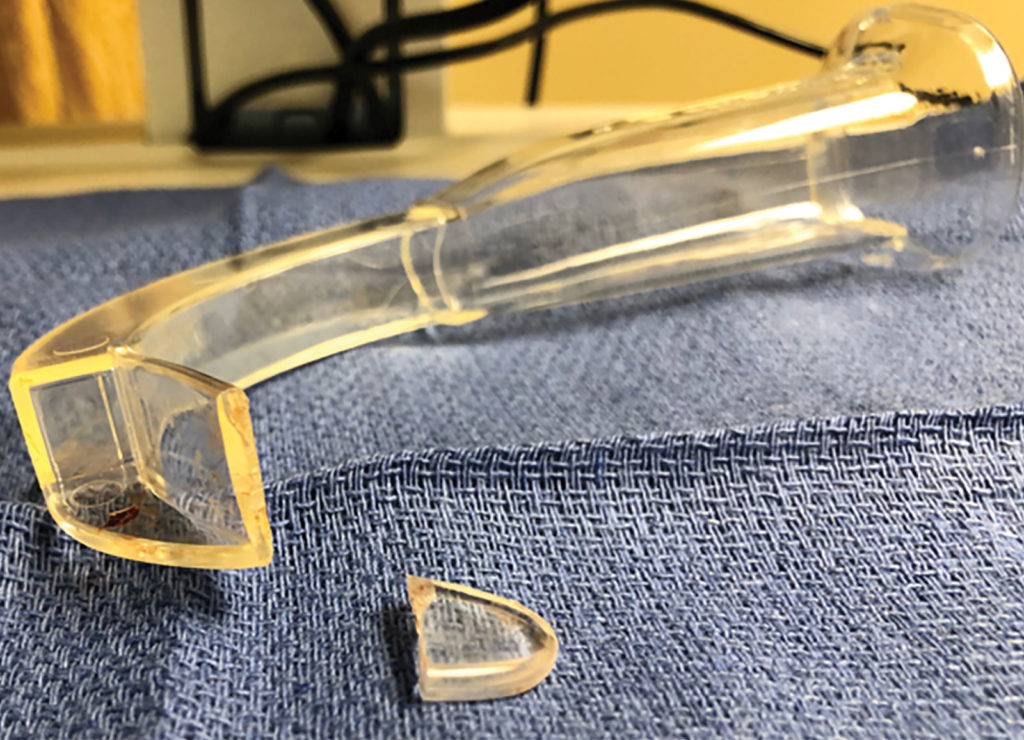 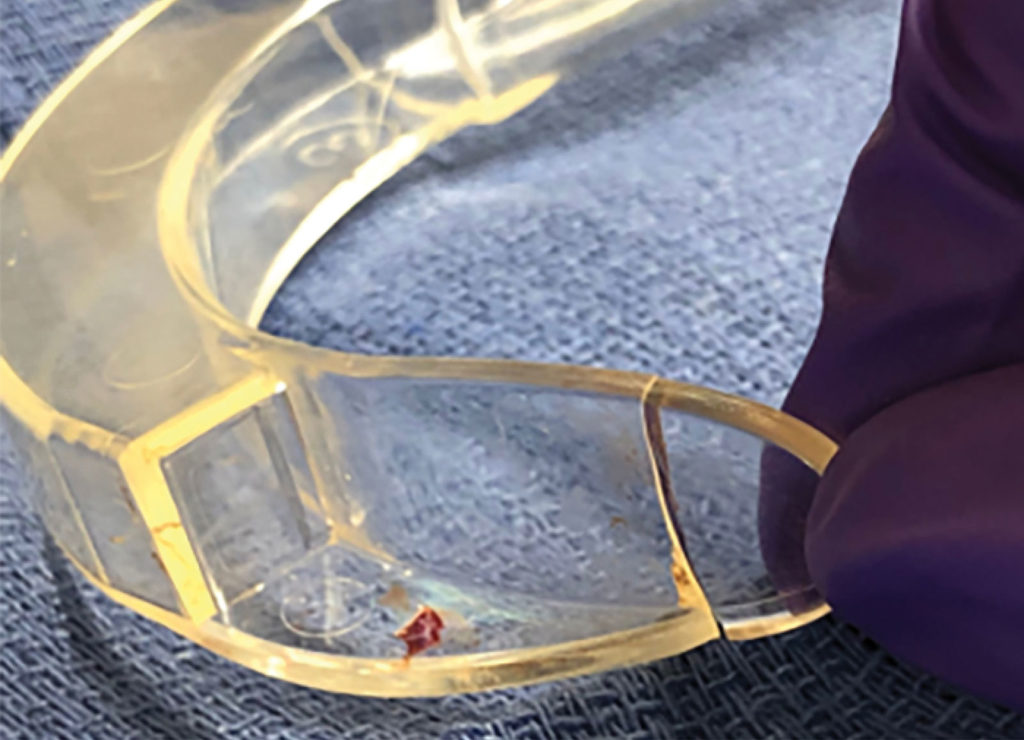 In reviewing the literature, GlideScope® cover defects and failures are rare events that occur during intubation.1-3 Nevertheless, it is imperative that the anesthesia professional be cognizant of potential equipment failures when utilizing video laryngoscopy, as GlideScope® blade fractures can lead to disastrous consequences (e.g., migration of the fractured tip into the lungs, perforation of the esophagus or trachea) for the patient. One hypothesis that might explain this occurrence is that the fracture occurred from a manufacturing flaw or damage during production or shipment. According to Verathon Medical, eight blade failures have occurred from 2007–2012.1 Only two cases have been published. Due to the limited information available since 2012, there is a need for further research on the design and durability of the distal tip of GlideScope® Stat blade covers. All three fractures (this case and the two published cases) occurred at the distal tip. The published cases of GlideScope® cover failure describe the use of upward, rotational force to reposition the blade.2,3 In this case, the blade was positioned midline with no upward or rotation force required. It is unclear, from Verathon Medical, where the fracture occurred in the other 6 cases reported to the company. There is no updated information, since 2012, to determine if this is an ongoing problem or if the incidents remain isolated.

This personal experience of an equipment malfunction involving the GlideScope® notwithstanding, video laryngoscopy remains a reliable option for difficult airways and routine procedures. However, caution should be used to carefully inspect the GlideScope® Stat cover for any defects or breakage before and after each use—especially at the distal tip.

She has no conflicts of interest to disclose.

The content of this letter was shared with Verathon, the manufacturer of the GlideScope® video laryngoscope who provided the following information for readers.

Verathon maintains a robust and compliant quality management system including a complaint and vigilance reporting system. We take all complaints seriously. Complaints can be reported directly to our Customer care team at +1-800-331-2313.