Rapid infusion catheters (RIC) are useful for patients requiring prompt, large volume fluid resuscitation. This high-flow, low-resistance device may be readily inserted in a large peripheral vein via a standard guidewire/dilator/catheter insertion technique. However, like all invasive devices, its introduction must follow standard procedures to avoid errors and risks of infiltration or patient injury. 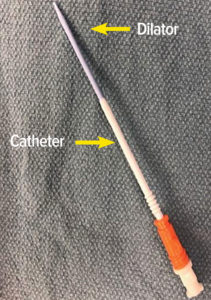 Figure 1: Depicts an 8 French Rapid Infusion Catheter with the dilator (blue) in situ.

The rapid infusion catheter (RIC) is a device used to convert standard peripheral intravenous (PIV) access into a large-volume resuscitation portal.1 The placement of this large-bore (8.5F) intravenous catheter is performed in clinical scenarios where clinicians anticipate the need for large volume resuscitation, and in our case, in preparation for a liver transplantation. This case illustrates once again how inexperience or unfamiliarly with invasive devices such as this “simple” intravenous catheter has the potential for perioperative complications and significant patient injury. 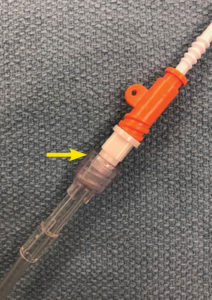 Figure 2: The yellow arrow shows the connection between the RIC dilator hub and infusion tubing.

A 47-year-old man with past medical history of atrial fibrillation and hepatocellular carcinoma presented for a deceased donor liver transplant. After an uneventful induction of general anesthesia, we inserted an 8.5 French Rapid Infusion Catheter (RIC) (Figure 1) in anticipation of large-volume resuscitation. A standard technique was utilized for RIC insertion; i.e., a 20G peripheral intravenous (PIV) catheter was initially inserted in the right antecubital brachial vein, providing access for the RIC guidewire. The RIC vein dilator/8.5 F catheter assembly was then advanced to its normal position within the vein. To confirm venous placement, intravenous tubing was connected to the dilator hub to transduce vascular pressure and confirm venous placement. However, contrary to normal insertion procedures, the operator then failed to remove the venous dilator, and incorrectly attached one limb of the rapid infusion system tubing directly to the RIC dilator (Figure 2). The rapid infusion system ran smoothly, and high-pressure alarms were not triggered despite infusion rates up to 400 mL/min. Patient positioning was reconfirmed throughout the extended operation, and no swelling, edema, or signs of vascular extravasation were noted in the affected limb. It was only upon transport to the ICU the next day that the right arm was noted to be edematous secondary to an infiltration associated with the RIC dilator. The RIC system was removed, and the dilator was confirmed to have been left in place within the 8.5 F catheter itself.

The preloaded dilator-catheter assembly of the RIC system allows for efficient large bore peripheral venous access in patients. However, its pre-assembled dilator/catheter design led to a misunderstanding by the anesthesia professional in this case; thus, the entire assembly was incorrectly left in vivo. The Luer-lock connection to the vascular dilator was interpreted as “confirmation” of this (erroneous) assumption of where to connect the IV tubing. A subsequent root cause analysis (RCA) determined four contributing factors:

We were fortunate that this event resulted in no permanent injury to the vascular system or soft tissue of the arm.2 However this incident could have been catastrophic given that the system was attached to a high-volume, positive-pressure fluid infusion pump. Medical centers and departmental directors should ensure adequate education of all OR staff and anesthesia professionals whenever new or novel devices are introduced into the clinical arena.

Dr. McDaniel is a CA-2 anesthesiology resident at the University of Minnesota.

Dr. Kiberenge is an assistant professor in the Department of Anesthesiology at the University of Minnesota.

Dr. Gould is an associate professor in the Department of Anesthesiology at the University of Minnesota.

None of the authors have any conflicts of interest.

On behalf of Teleflex, I would like to thank you and the Anesthesia Patient Safety Foundation (APSF) for forwarding a letter, which you recently received from a physician describing an erroneous use of the Arrow® RIC® Rapid Infusion Catheter Exchange Set. The concern raised by the clinician was that the sheath/dilator assembly was left in the patient (without removing the dilator) and then connected to a rapid infusion system. This adverse event has been forwarded to the appropriate department within Teleflex and will go through the usual complaint management/risk evaluation process. In the meantime, we are committed to patient safety—as are you and the >122,000 anesthesia providers who will be receiving your publication—and we can only reinforce to clinicians the importance of using the device as instructed in the IFU.