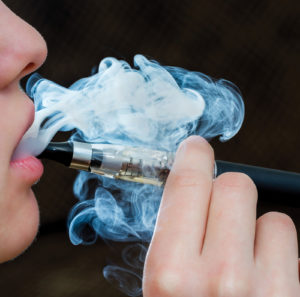 The use of e-cigarettes, commonly referred to as vaping, has increased exponentially in the past several years. E-cigarettes were initially marketed as a smoking cessation aid, but their use among adolescents and young adults doubled from 2017 to 2019. In early 2019, cases of e-cigarette, or vaping, product use associated lung injury (EVALI) began to be presented to hospitals across the United States. Although other chemicals have been implicated in EVALI, The Centers for Disease Control and Prevention (CDC) has now suggested that vitamin E acetate, commonly added to illicit cannabis vaping liquids, is the most likely cause of EVALI.1 As of December 10, 2019, a total of 2409 cases have been reported to the CDC.1

Recently, in our institution, a 30-year-old male presented to our emergency department with shortness of breath, daytime sweats, chills, and progressive shortness of breath. He reported “vaping all day” and admitted to vaping both tetrahydrocannabinol (THC) and nicotine for the last 5 years. After a battery of tests were negative, severe EVALI was presumed, which required ICU admission with high FiO2 and PEEP requirements. The patient was started on IV methylprednisolone 40 mg twice per day. During his ICU stay, he developed an acute left tension pneumothorax while on non-invasive ventilation requiring chest tube placement and endotracheal intubation. The patient was found to have bilateral apical blebs on chest computer tomography scan. After being weaned from the ventilator, our thoracic surgeons scheduled pleurodesis and resection of a large bleb due to a persistent large left pneumothorax despite persistent chest tube therapy.

In the operating room, he was appropriately preoxygenated, but rapidly desaturated to an SpO2 of 51% following induction of anesthesia, recovering to SpO2 >90% with manual ventilation. Oxygenation and ventilation during one-lung ventilation were expectedly difficult.

Physiologic derangements included a PaCO2 of 78 mmHg with an ETCO2 of 47 mmHg, indicating significant dead space, and a PaO2 of 69 mmHg on an FiO2 of 1.0 indicating a significant A-a gradient. The PEEP was 8 cm H20 and plateau pressure was 32 mmHg. The procedure was successful and he was returned to the ICU. Several days later, while he was no longer requiring positive pressure ventilation, he developed another tension pneumothorax in the contralateral lung. He again underwent pleurodesis and bleb resection.

To our knowledge, no case reports describe the intraoperative management of a patient with EVALI, with only one other EVALI-associated pneumothorax noted previously.2,3 Intraoperative ventilation of these patients may be challenging, and high levels of FiO2 and PEEP may be required to maintain adequate gas exchange. If significant difficulty is expected, venovenous extracorporeal membrane oxygenation may be warranted in capable centers.

Patients with EVALI present almost universally with constitutional, respiratory, and gastrointestinal symptoms. Common presenting symptoms and findings are detailed in Table 1. Severity can range from mild, not requiring hospitalization (5–10%) to severe, requiring ICU admission (44–58%) and, often, non-invasive ventilation (32–36%) or intubation with mechanical ventilation (11–32%).2-4 Management of these patients is largely supportive, with lung protective ventilation with low tidal volumes and high PEEP employed similar to those used in Acute Respiratory Distress Syndrome. Empirical corticosteroids may be beneficial, and have been widely administered in published reports.4 Thus far, the CDC has documented 52 deaths across the United States.1 While much remains to be elucidated regarding EVALI, e-cigarette use is increasingly prevalent. We are likely to see more cases in our hospitals and increasingly, our operating rooms in the future.

Dr. Dodick has no conflicts of interest.

Dr. Greenberg is editor-in-chief of the APSF Newsletter.