An Anesthesia Crisis Resource Management Workshop was organized by the Department of Anesthesiology, Peking University People’s Hospital, Beijing, China, on May 13–14, 2017 (Figure 1). The goal of this workshop was to introduce the participants to why, how, and when to use EMs and to use Emergency Manuals as a resource for both education and clinical care. The participants could become qualified teachers to organize and teach simulation in their institutes (train the trainers). Training on why, when, and how to use EMs is essential for the effective adoption and implementation of EMs in any facility.

The participants registered for a two-day simulation training session and all participants attended interactive lectures regarding the use of an emergency manual in the perioperative environment. Then they were divided into two groups. One group used a full human patient simulator (high fidelity) mannequin, SimMan Essential (Laerdal, Wappingers Falls, NY, USA). The other group used CPR mannequin (low fidelity) and an iPad to display the simulated vitals generated by the SimMon (Castle Andersen ApS). The two groups were switched after two hours and each team participated in two scenarios. Each scenario lasted 15–20 minutes and was followed by a debriefing session. On Day 2, the participants were trained to write simulation training scripts. The workshop faculty included Yi Feng, Haiyan An, Hui Ju, Hong Zhang, Ran Zhang, Shuo Guan, Shuo Liu, Jie Zhang, and author Jeffrey Huang.

Training on why, when, and how to use EMs can be demonstrated by a group of anesthesia educators in an anesthesia conference. Demonstration-based methods have the advantages of simulation with lower expense. Expert demonstration appears similar to simulation and is superior to didactics for teaching incoming interns teamwork skills.4 Watching a videotaped simulation case was similarly effective to participating in a simulation.4 Development of demonstration-based training for teaching crisis resource management might be an effective and cost-efﬁcient way of implementing emergency manuals.

An EM simulation demonstration was part of the program at a regional anesthesia meeting. A group of anesthesiologists from the Department of Anesthesia, Xiangyang Central Hospital, formed the “simulation education team.” They created scenarios from prior real life events. The team modified these scenarios after simulation practice to improve them for broad-based provider use.

The simulation education team rehearsed scenarios several times to ensure that no element was omitted, all required resources were available, and that it could run smoothly and realistically. 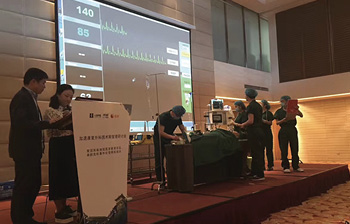 On May 6, 2017, the Enhanced Recovery After Surgery Perioperative Management Seminar and the Anesthesia Crisis Management Simulation Workshop was held in Xiangyong, Hubei, China (FIgure 2). The team, led by Mingqiang Li, Fan Ye, Jianfeng Zhang, and the author, performed live in front of a large group of participants. They engaged in four OR crisis scenarios. At the end of each scenario, the experts were invited to evaluate their performance. The audience was welcome to make comments or suggestions. The simulation demonstrations were well received and highly praised by the audience. 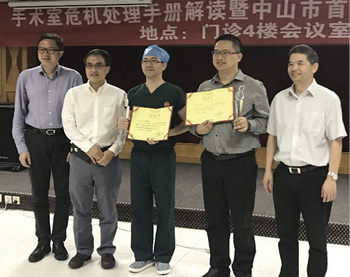 Multidisciplinary training in emergency manuals simulation training has been slowly implemented due to many practical issues, such as scheduling conflicts, lack of a training facility, and lack of trained instructors. Simulation competition has been demonstrated as an effective educational intervention.5 In an effort to stimulate a multidisciplinary team training for emergency manuals implementation, an Operating Room Emergency Manuals Simulation Training Competition was launched as a pilot program in Zhongshan City, Guangdong, China. The competition invitation was sent to each local hospital by the Zhongshan City Society of Anesthesiology. The organizing committee was led by Binfei Li and Chunyuan Zhang. The hospital was required to send a video clip of simulation training for evaluation. The top scoring teams advanced to the final round, a half-day event where multidisciplinary teams from seven local hospitals competed against each other. The finals were judged by a panel of experts from outside Zhongshan City. Each team wrote their own simulation scenario, and rehearsed their scenario prior to the competition. Content was focused on crisis resource management skills by using cognitive aids (Stanford Operating Room Emergency Manuals).

To our knowledge, this competition is the first of its kind in China. The organizing committee received strong positive feedback from participants and faculty involved. The event has served as a catalyst to stimulate the participants to organize simulation training for implementation of operating room emergency manuals. Plans for the continued growth of this project are under way.

Dr. Huang is Vice Chief of Quality, Anesthesiologists of Greater Orlando, a Division of Envision; Associate Professor at the University of Central Florida College of Medicine; serves on the APSF Committee on Education and Training; and on the ASA Committee on International Collaboration.

Dr. Huang has no conflicts of interest to declare.