I am writing to inquire regarding risks to a patient when a transdermal medication patch is left in place in the setting of electrocautery for surgery. It came up recently regarding oxybutynin because the surgeon was aware of metal particles in the patch layers, and was concerned about the risk of a burn if the patch happened to be in the path between the cautery site and the grounding pad. Despite a pretty extensive literature search, I can’t find any reports of patient harm. If there is a risk, it would seem to only pertain to patches that contain metal, but that information would be on the packaging of the patch, not on the patch itself. Since some patches contain metal but it is not clear from the labeling on the patch, it might seem prudent to remove all medication patches prior to surgery involving cautery if there is, in fact, a risk of patient harm.

Thank you for considering this question..

Neither of the authors have any conflict of interest pertaining to this article.

Your question about the risk of patient injury from a transdermal drug patch during surgery raises questions about both the potential for a burn, as well as alterations in medication delivery from the patch. The absence of case reports of significant patient harm from metal-containing patches is reassuring, but does not eliminate the concern for patient injury. In addition, removing the patch creates the risk of suboptimal medication delivery unless an alternate formulation of the drug is provided. Furthermore, transdermal patches provide consistent medication delivery, resulting in stable serum concentrations, which may be difficult to re-establish in the perioperative period leaving the patient at risk for under- or over-dosage. Ultimately, the risk of removing the patch should be weighed against the risk of injury if the patch is left in place. 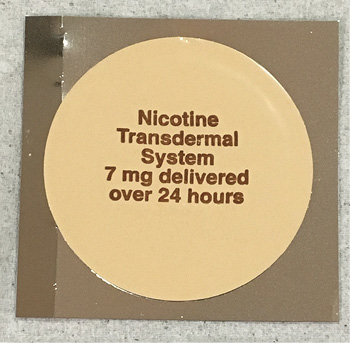 Transdermal, drug-delivery patches are self-contained dosing devices, which deliver medication into the circulation through transdermal absorption. Each patch is composed of four layers—the backing layer, drug layer, adhesive layer, and protective/release line. Some transdermal products have aluminum and other metal elements contained in the non-adhesive backing layer. Information regarding the contents of transdermal patches can be found in the product package insert and in Lexicomp in the Warning/Precautions section. In 2009, the FDA completed a literature evaluation and product review to identify transdermal patches containing metal components with the goal of reducing the risk of burn during MRI procedures.1,2 During MRI, the high-energy magnetic field and fluctuating radio-frequency can cause the metal to heat through direct absorption of energy. Metal-containing patches cannot be reliably shielded during MRI; therefore, any patch with unknown metal content should be removed. A recent publication specified which transdermal patches should be removed before an MRI procedure.3 The mechanism of burn injury from a metal-containing patch during MRI is different than the possible mechanism of a burn during electrosurgery use.

The best guidance on the risk of burn from a metal-containing patch due to electrosurgery can be found in the guidance on patients wearing jewelry in the operating room. In this case, direct contact by a monopolar cautery device with metal jewelry would risk burning the patient by passing current through the jewelry. Activation of the device in close proximity to metal jewelry could transfer heat through the metal to the skin with the potential to cause a burn. Finally, there is also a concern that the metal in the jewelry could create a current path from the patient to ground, but that is an unlikely scenario. Both the ECRI Institute and the Pennsylvania Patient Safety Authority published guidance on the risk of burn injury if a patient has jewelry on during a procedure where electrosurgery is used. Both organizations were quite specific in recommending “Removal of jewelry is not necessary to avoid patient burns during electrosurgery.”4,5 This recommendation recognizes the low risk of burn potential due to electrosurgery when used properly with the correct grounding pad and holstering the active end of the device when not in use. Transdermal medication patches containing metal would present no greater risk of burn related to electrosurgery than metal jewelry on the skin with a potentially lesser risk since the metal is encased by non-metal layers. Another question however is the impact of electrosurgery on transdermal drug delivery.

Altered drug delivery could occur due to changes in temperature at the site or from electrical current passing through the patch. Transdermal drug delivery can be significantly affected by increases in local and systemic temperatures causing increased blood flow, vasodilation, and enhanced skin perfusion at the site of applied heat;6 however, the extent of alterations in transdermal drug delivery for all transdermal patches is not well known. Transdermal fentanyl delivery is known to increase when the patch site is warmed and it is recommended to either remove the patch in favor of IV dosing, or ensure that it is not in a location where it can be directly warmed by a patient warming system.7-9 Some manufacturers test their products at temperatures outside of normal physiologic ranges and (if available) this information may be published in the package insert and be available in the Storage/Stability or Warnings/Precautions section in the Lexicomp™ drug monograph (Figure 1). Temperature excursion testing is not an FDA requirement and is not available for all transdermal products. Electrical current has been purposely incorporated into innovative transdermal patch designs to enhance drug delivery by iontophoresis and electroporation.10 In theory, it is reasonable to conclude the electrical current used in the electrosurgery procedures could increase drug delivery, but we were unable to find any literature documenting the effects (direct or indirect) of electrosurgery electrical current on transdermal drug delivery patches.

In summary, the risk of electrical current passing through a metal-containing patch and causing a burn is quite low if the patch is located outside of the surgical site and if direct application of the cautery device to the patch is avoided. The use of electrosurgery in and of itself should not be a reason to remove the patch, especially if the patient is therapeutically controlled on the level of medication delivery. Relocating the patch outside of the surgical field may be reasonable and should eliminate the potential for interaction between electrosurgery and the patch. Although it was not part of your original question, it is worthwhile emphasizing that the risk of burn from a metal-containing patch during an MRI is very real and any patch with questionable metal content should be removed prior to entering the MRI scanner. Finally, there is potential for the drug delivery to be altered by external heating or changes in skin blood flow under the patch. The impact of temperature on the dose delivered may not be documented, so ensuring that the patch is not located under an external warming device is prudent.

Ultimately, the decision to remove the patch should be based upon the need to maintain the therapeutic benefit of the transdermal delivery system and the ability to minimize the risk of leaving it in place. If the risks outweigh the benefits and it is possible to replace the transdermal delivery with another dosing route, the patch should be removed.

Dr. Feldman serves as a member of the Clinical Advisory Board, ClearLine MD, Boston, MA. Dr. Hoffman and Mr. Jamison have no conflicts of interest to declare.

The APSF sometimes receives questions that are not suitable for the Dear SIRS column. This Q and A column allows the APSF to forward these questions to knowledgeable committee members or designated consultants. The information provided is for safety-related educational purposes only, and does not constitute medical or legal advice. Individual or group responses are only commentary, provided for purposes of education or discussion, and are neither statements of advice nor the opinions of the APSF. It is not the intention of the APSF to provide specific medical or legal advice or to endorse any specific views or recommendations in response to the inquiries posted. In no event shall the APSF be responsible or liable, directly or indirectly, for any damage or loss caused or alleged to be caused by or in connection with the reliance on any such information.