Postpartum hemorrhage complicates approximately 3% of U.S. deliveries and is most often due to uterine atony.1 Hemorrhage is the leading cause of severe maternal morbidity and contributes to 11.4% of U.S. maternal deaths.2,3 Globally, it is the leading cause of maternal death.4 Postpartum hemorrhage is often accompanied by a coagulopathy that may be consumptive in nature,5,6 and experts therefore recommend early monitoring and replacement of factors, particularly fibrinogen.7 More recent evidence suggests fibrinolysis may also play a role.7,8 Bleeding patients demonstrate increases in D-dimer and plasmin-antiplasmin complexes, both byproducts of fibrinolysis, compared to non-bleeding patients, and these increases are attenuated by treatment with tranexamic acid (TXA, Figure 1).8

History and Non-Obstetric Use

TXA—trans-4-aminoethyl cyclohexanecarboxylic acid—is a synthetic lysine analog. It binds to plasminogen, blocking activation to plasmin, the leading accelerator of fibrinolysis and fibrinogenolysis.9 Tranexamic acid was developed in 1962 by Utako Okamoto, a Japanese scientist, in her pursuit of a pharmacologic treatment for postpartum hemorrhage.10

Many researchers have investigated the effect of TXA on surgical bleeding. A systematic review and meta-analysis that included 10,488 patients from 129 trials demonstrated decreased risk of transfusion and possible decreased mortality among patients who received TXA versus placebo.11 The findings held true across many types of procedures, including cardiac, orthopedic, hepatic, urological, vascular, and cranial surgeries. There were no differences between groups in the occurence of in thromboembolic events, including deep venous thrombosis and pulmonary embolism.

The CRASH-2 trial investigators randomized over 20,000 trauma victims to receive TXA (1 gm over 10 minutes, then 1 gm infusion over 8 hours) versus placebo.12 Those who received TXA had decreased overall mortality and decreased mortality due to bleeding, particularly notable when TXA was administered within 3 hours of injury. Subjects had no differences in thromboembolic events or deaths due to other causes.

Findings such as these led the American Society of Anesthesiologists Task Force on Blood Management to recommend consideration of prophylactic antifibrinolytic therapy during cardiac bypass, joint replacement, and liver surgeries and other clinical circumstances at high risk for excessive bleeding, and therapeutic use whenever fibrinolysis is documented or suspected; however, the task force noted that the safety of antifibrinolytics in hypercoagulable patients, such as parturients, had not been established.13

Prior to 2017, the literature provided little guidance regarding antifibrinolytic therapy during obstetric hemorrhage. A meta-analysis, which considered only high-quality studies, demonstrated a small (140 mL) decrease in estimated blood loss among postpartum patients who received prophylactic TXA versus placebo.14 Effects on transfusion were unclear. TXA did not increase the incidence of thromboembolic events, but the analysis was underpowered to detect this event, and concerns remained because of the hypercoagulable nature of pregnancy. Furthermore, all trials had been conducted on low-risk patients undergoing cesarean section, and so the expected response in hemorrhaging patients remained unknown.

Earlier this year, investigators published the results of the World Maternal Antifibrinolytic (WOMAN) trial.15 This was a randomized, placebo-controlled, double-blind study involving 20,060 women diagnosed with postpartum hemorrhage from 193 hospitals in 21 countries. Patients received TXA (1 gm over 10 minutes) versus placebo; TXA was repeated if bleeding continued at 30 minutes, or if previously controlled bleeding resumed anytime during the first 24 hours. The primary outcome variable was a composite of death or hysterectomy within 42 days. Secondary outcomes included death, death by cause, thromboembolic events, obstetric interventions, and other adverse events (e.g., renal failure, sepsis, etc.). Those subjects who received TXA had decreased death from bleeding (1.5% versus 1.9%, RR 0.81 (0.65–1.00), P=0.045) and no difference in deaths due to other causes, including pulmonary embolism, or in overall mortality, compared to control subjects. No differences existed between groups in venous or arterial thromboembolic events, or any other adverse outcomes. The difference in mortality from bleeding was most significant when TXA was administered within 3 hours of delivery.

The trial had some weaknesses. During the study, the investigators noted that enrollment often occurred concurrently with the decision to perform hysterectomy, and so they recalculated the sample size analysis based on death from bleeding, rather than the composite outcome; consequently the planned sample size was increased from 15,000 to 20,000. It is important to note that “These changes were made before un-blinding and without any knowledge of the trial results,” and therefore likely introduced little bias.

The authors concluded that TXA administration during postpartum hemorrhage decreases death from bleeding without increasing adverse events or death from other causes. However, the majority of subjects came from Central Africa and South Asia, and extrapolation of these results derived mostly from low- and middle-resource settings to high-resource settings may prove problematic. Over 7% of those who died in the WOMAN trial were not transfused at all. Hemorrhage-control interventions that are common in the U.S., such as uterine tamponade and brace sutures, were employed in only a small minority of cases in the WOMAN trial (7.1% and 2.7% respectively). Furthermore, the case fatality ratio of >2% in the WOMAN trial greatly exceeds that seen in the U.S. (<0.1%).a It therefore seems unlikely TXA will demonstrate an appreciable benefit to U.S. hemorrhage-related mortality. TXA does, however, decrease blood loss,14 and is potentially transfusion-sparing and hysterectomy-sparing. Furthermore, the absence of excess thrombotic events in the WOMAN trial should provide practitioners reassurance regarding its safety in parturients. It therefore is reasonable to recommend TXA administration during severe postpartum hemorrhage or when severe hemorrhage is expected. No consensus yet exists regarding exactly when to administer TXA within a hemorrhage protocol, or what hemorrhage risk justifies prophylactic administration. The Maternal Fetal Medicine University Network is currently enrolling patients in a randomized controlled trial of prophylactic TXA versus placebo in the setting of known placental invasion with the primary outcome of estimated blood loss.16 It is important to note that TXA serves only as an adjuvant to comprehensive hemorrhage protocols detailing timely and appropriate medical and surgical interventions.17

a US case fatality per postpartum hemorrhage can be roughly estimated by calculating the fraction: 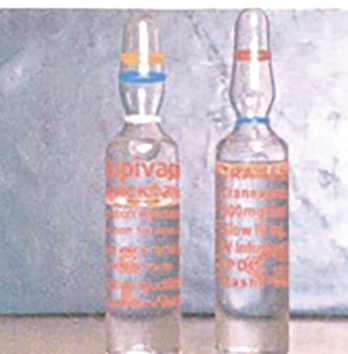 Figure 2. TXA is available in a variety of doses, vials, and ampules and can resemble bupivacaine for intrathecal use. Therefore, caution should be used when drawing up and administering TXA or bupivacaine. Photo from Veisi F, Salimi B, Mohseni G, et al. APSF Newsletter Spring 2010;25:9. https://www.apsf.org/ newsletters/html/2010/spring/02_inject.htm

Several adverse events have resulted from TXA administration. Foremost, accidental neuraxial administration has resulted in uncontrolled seizures and death.18 Tragic lethal intrathecal administrations have been reported,18-20 and clinicians should work closely with their pharmacy departments to minimize the risk of drug-swap errors (Figure 2: Look-alike vials of TXA and bupivacaine).20

Next, although the WOMAN trial was reassuring regarding pulmonary embolism, serious thrombotic events have been reported in parturients. Renal cortical thrombosis and necrosis resulted when several obstetric patients received TXA bolus doses 1–4 gm followed by infusions 0.5–1.0 gm/hr resulting in cumulative doses of 2–11 (5.3 ± 2.8) gm (mean and standard deviation).21 When TXA prophylaxis was employed in the presence of intra-arterial balloons in a patient undergoing placenta percreta surgery, aortoiliac thrombosis developed.22 Similar to the cases of renal necrosis, the patient had received a loading dose of 1 gm over 10 minutes followed by continuous infusion for 8 hours. Clinicians should likely avoid TXA infusions, and TXA administration in non-flow states.

Lastly, TXA is a competitive antagonist of gamma-aminobutyric acid, which results in neuronal excitability, and dose-dependent seizures may occur after TXA administration. Experts recommend using the lowest effective dose of TXA and treating seizures that do occur with propofol.23 In the WOMAN trial, seizure occurred rarely (<1%) and at similar rates among those that received TXA versus placebo.15 It is likely that most of these seizures represented eclampsia.

Results of a recent large-scale clinical trial support the use and safety of TXA for obstetric patients experiencing or expected to experience severe hemorrhage. Great care must be taken to avoid accidental neuraxial administration of the drug given the lethal result. Large doses and continuous infusions should be avoided to minimize thromboembolic complications and seizure activity.

Dr. Scavone is Professor of Anesthesia & Critical Care and Professor of Obstetrics & Gynecology and currently serves as the Clinical Director of Labor & Delivery at the University of Chicago Medicine.

Dr. Sullivan is Professor of Anesthesiology at the Northwestern University Feinberg School of Medicine and currently serves as the Associate Chief Medical Officer at Northwestern Memorial Hospital.

Neither author has any conflict of interest pertaining to the present article.