MH is best known by anesthesia professionals because it is triggered by anesthetic drugs. Since anesthesia intervention causes an MH crisis, it has become an anesthetic-related problem. But there are other drug-induced hypermetabolic conditions that are caused by abnormal central nervous system (CNS])activity and have signs resembling those of an MH crisis (See Table 1).3 Moreover, anesthetic drugs or interventions may contribute to or precipitate these. Such CNS crises can present in the extended perioperative period with MH-like signs of hypermetabolism (elevated HR, RR, temperature, and carbon dioxide production), abnormal motor activity, abnormal mentation, and progressive cardiorespiratory failure. Although these drug-induced crises are more commonly seen by emergency medicine, neurology, psychiatry, and critical care providers as evolving medical emergencies, they can also present around the time of surgery. Central drug-related hypermetabolic conditions are important to anesthesia professionals because they can be seen in the perioperative period, are not MH (although they may resemble MH), and may have different management requirements if morbidity and mortality are to be avoided. Although these are not caused primarily by anesthetic drugs, some can be precipitated by drugs commonly given or withheld in the perioperative period. Fever associated with MH crisis and these central hypermetabolic conditions respond poorly to antipyretic drugs. Anticholinergic and antipsychotic drugs with anticholinergic effects are relatively contraindicated because they inhibit heat dissipation and sweating.4 Dantrolene sodium is a specific antidote to the MH crisis because of its direct action on muscle, but it may also be helpful in controlling fever caused by muscle hyperactivity and heat production caused by these CNS and other problems.5-8

The volunteer MH Hotline that is supported by donations and the Malignant Hyperthermia Association of the United States [MHAUS] receive calls from anesthesia and surgical practitioners, perioperative nursing staff, and others with questions about the recognition and management of MH crises, post-crisis management, and other conditions that resemble MH. (https://www.mhaus.org) Review of MH Hotline calls shows that some of these calls are associated with MH-like conditions that are drug- or toxin-induced (unpublished data-author’s personal communication with MHAUS Hotline Database).

Drug-induced, MH-like syndromes include Neuroleptic Malignant Syndrome (NMS), Parkinsonism/Hyperthermia Syndrome (PHS), Serotonin Syndrome (SS), baclofen withdrawal, intoxication caused by stimulants like amphetamine, MDMA and cocaine, and psychoactive drugs like phencyclidine (PCP, “angel dust”) and lysergic acid diethylamide (LSD) (see Table 2). While the clinical setting of these is most often not perioperative and the presentation may not be so fulminant as classic MH, these conditions also can pose life-threatening medical problems that the anesthesia and surgical team have to address intra- and postoperatively. And, of course, these evolving drug-induced problems should be differentiated from inflammatory and central neurologic effects of organic conditions like encephalitis, sepsis, CNS abscess, tumor, head trauma, and some strokes. Also, confusion, together with hypermetabolism is seen with thyrotoxicosis, heatstroke, and untreated lethal catatonia. 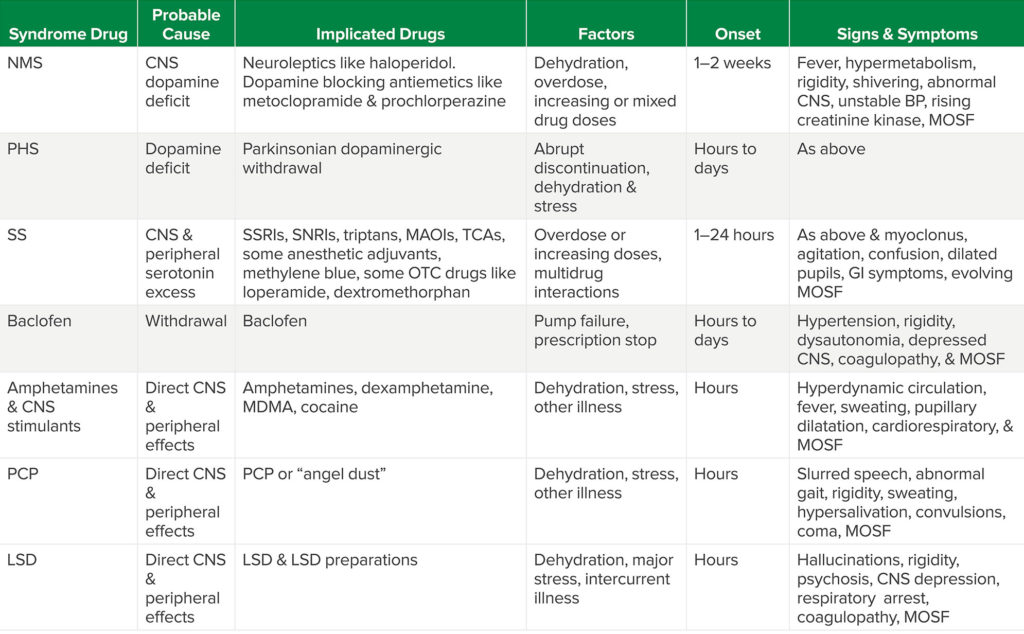 NMS is a relatively rare condition associated with administration of chronic or increasing doses of neuroleptic drugs that block dopaminergic activity in the brain. Neuroleptics are given for sedation, behavioral control, and management of psychotic disorders. Postoperatively they may be used for behavioral control during emergence delirium, for antiemetic properties, or in the ICU following surgery. Individuals who take these drugs, and are ill, dehydrated, agitated, or catatonic are more susceptible to NMS. “Occult” neuroleptics like prochlorperazine can also trigger NMS. These are often given perioperatively for nausea or nausea prophylaxis. The onset of hypermetabolic signs with fever, abnormal muscle activity (including rigidity), and abnormal mentation can be seen within hours and up to one or two weeks after neuroleptics are started. Progression of these signs is usually reversed over time when the causative agents are discontinued, but unrecognized NMS can progress to muscle injury, cardiorespiratory failure, and death. Primary treatment requires early diagnosis, neuroleptic withdrawal, and supportive medical care. In the absence of randomized controlled trials, benzodiazepines, dopaminergic drugs like bromocriptine or amantadine, dantrolene, and ECT (electroconvulsive therapy) have been employed with varying success. Neither laboratory tests nor presenting symptoms make the diagnosis of NMS. Diagnosis requires a thorough medical history and examination together with elimination of other organic or drug-induced conditions.9,10 If NMS is suspected, the Neuroleptic Malignant Syndrome Information Service (NMSIS) sponsored by MHAUS provides literature, and email and telephone support through its website (www.NMSIS.org)

PHS is caused by withdrawal of centrally acting dopaminergic drugs that control the muscle rigidity, motor retardation, and other symptoms of Parkinson’s disease. Symptoms often fluctuate and drug dosing may vary because patients can become relatively insensitive to dopaminergic drugs. Dopaminergic drugs are sometimes stopped during acute hospitalization for medical or surgical conditions or preoperatively in order to minimize their autonomic side effects. PHS, a semi-acute condition that resembles NMS and MH, may follow sudden withdrawal of Parkinsonian drug therapy. It is reported in up to 4% of patients in whom dopaminergic drugs are acutely discontinued and approximately a third of patients who develop the syndrome have long-term sequellae.11 Fever, abnormal muscle activity, and other signs of hypermetabolism together with autonomic instability are seen. PHS may be facilitated by dehydration, infection, and other system stresses, or following administration of central dopamine-blocking drugs like droperidol or neuroleptics like haloperidol. It can also be induced in Parkinson’s patients after sudden loss of deep brain stimulation (DBS) for Parkinson’s disease or following implantation of electrodes for DBS.12,13 While NMS is a life-threatening condition caused by drugs that block central dopamine, PHS is caused by withdrawal of dopaminergic therapy. For this reason, complete discontinuation of dopaminergic therapy in the perioperative period should be avoided, if at all possible. Also, those patients who have had their Parkinsonian drugs discontinued in the perioperative period, should restart therapy as soon as possible.14

SS is usually seen when several drugs that increase central serotonin levels are given concomitantly, but it may also occur following a single dose or overdose of one or more serotonergic drugs. Serotonin or 5-hydroxytryptamine, a monoamine derived from tryptophan, is a neurotransmitter in the brain, gut, and on platelets. Serotonin modulates a broad array of central and peripheral actions that include regulation of mood, appetite, sleep, some cognitive functions, platelet aggregation, and smooth muscle contraction of uterus, bronchi, and small blood vessels.15 Consequently, a number of antidepressant drugs have been designed to manipulate CNS serotonin levels. These include the Selective Serotonin Reuptake Inhibitors (SSRIs), Selective Norepinephrine Reuptake Inhibitors (SNRIs), tricyclic antidepressants, and monoamine oxidase inhibitors (MAOIs). The incidence of SS has been reported as 0.9–2% of patients on chronic therapy and as high as 14–16% after overdose.16 SSRIs and SNRIs are most commonly associated with SS. Commonly used anesthetic adjuvant drugs and other major classes of drugs—including some sold without prescription—may contribute to or precipitate SS (see Table 3).17-20

Table 3: Some Drugs that Cause or Potentiate Serotonin Syndrome.

Onset can be abrupt following drug administration or overdose. SS can present as a hyperthermic, hypermetabolic syndrome that’s difficult to distinguish from NMS, PHS, and MH. As with NMS and PHS, progression of symptoms may lead to cardiorespiratory failure, muscle damage, multiple organ injury, and death. The incidence of SS may be underestimated, possibly because of mild cases that are overlooked or because more serious presentations can mimic other causes. Hence it may be that SS is more common in the perioperative period than we know. It is important for anesthesia practitioners to remember that a number of anesthetic adjuvant drugs we commonly use can precipitate or increase risk of SS. Treatment requires cessation of all drugs that contribute to serotonin excess together with supportive therapy.15,16 Although unproven, some authorities recommend use of the central 5-hydroxytriptamine 2a receptor blocker, cyproheptadine, because the 5 hydroxytriptamine 2a receptor is thought to be one of the primary central activators of hyperthermia in SS.16,21,22

NMS and MH-like reactions have been reported following baclofen withdrawal. Baclofen enhances the central effects of gamma-aminobutyric acid (GABA), an inhibitory central nervous system (CNS) neurotransmitter. Baclofen is commonly given orally or by direct injection/infusion into cerebrospinal fluid by anesthesia and other pain specialists to control spasticity seen following CNS damage in conditions like cerebral palsy, spinal cord injury, and dystonia. Since anesthesia pain specialists use baclofen, it isn’t that uncommon for other anesthesia practitioners to become involved in pump refills, assessment of a malfunctioning baclofen pump, or a baclofen prescription for a colleague. Hence it’s important for members of the anesthesia care team to know that the MH-like syndrome following acute baclofen withdrawal, with relative CNS deficiency of GABA, can be dramatic with fever, abnormal mentation, autonomic hyperactivity, respiratory distress, rhabdomyolysis, and coagulopathy. Treatment involves supportive medical care and reinstitution of baclofen therapy.23

Selected CNS stimulants used for “recreation” or in overdose cause hypermetabolic conditions that may resemble MH crisis through direct peripheral and CNS effects. These include amphetamines, dextroamphetamine, methamphetamine, MDMA (methylene-dioxy-methamphetamine), cocaine, and psychoactive drugs like PCP and LSD. Although a drug history and toxicology screening usually identify such problems before emergency surgery for trauma or other acute conditions, “recreational” use may be encountered in patients scheduled for elective surgery. Just as some patients premedicate themselves with alcohol or “medical” marijuana prior to surgery in order to control anxiety, habitual users of these psychoactive drugs may do the same. While initial subjective symptoms vary as each of these drugs takes effect, all may produce signs of sympathetic hyperactivity, abnormal motor activity, fever, and hypermetabolism with cardiorespiratory and MOSF in the perioperative period. Patients presenting for surgery with abnormal mentation, signs of sympathetic hyperactivity, and other unusual symptoms that are not caused by their primary medical problem should have toxicology screening if at all possible.

While anesthesia professionals know MH as a perioperative crisis, it is important to be aware of other drug-induced hypermetabolic syndromes that may be seen in the perioperative setting. Indeed, commonly used anesthetic adjuvant drugs may contribute to or precipitate some of these. Dantrolene sodium is the critical drug for treatment of MH crisis, but it is non-specific in that it may ameliorate some of the hypermetabolic signs of other conditions. Because these can closely mimic the MH crisis and dantrolene may control some of the symptoms, misdiagnosis as MH could delay or prevent other effective treatment.

Stanley Caroff, MD, is professor of psychiatry at the University of Pennsylvania School of Medicine and director of the Neuroleptic Malignant Syndrome Information Service (NMSIS) and an officer of MHAUS.

Henry Rosenberg, MD, is the president of MHAUS.

Drs. Watson and Rosenberg have no conflicts of interest.