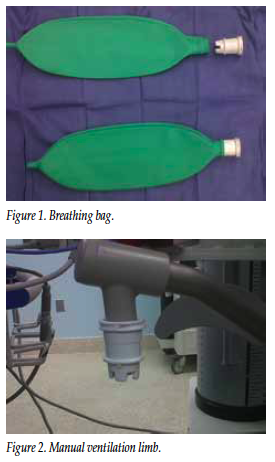 A 76-year-old man scheduled for an open colectomy received propofol for induction of general anesthesia and vecuronium to facilitate endotracheal intubation. After loss of consciousness, positive pressure ventilation via facemask was attempted using a Uni-lim™ coaxial circuit (Westmed, Tucson, AZ, USA). This was unsuccessful, as the breathing bag (Figure 1) separated from the white retaining ring that articulates with the manual ventilation limb of the anesthesia machine (Figure 2). Department policy is to stock additional circuits in the back of the anesthesia machine, so one was opened and an intact breathing bag was immediately substituted.

After the anesthetic, the bag was examined carefully. It was noted that a piece of tape that holds the green rubber portion of the bag to the white articulation ring was missing. Other circuits from the lot were visually inspected and found to be intact. Notification of the company about this defect resulted in their rapid response to evaluate available stock and reinforce the procedure for correct construction among their assembly personnel.1 While seemingly an isolated incident, this could have had disastrous consequences because of the inability to ventilate a patient who had just received a neuromuscular blocking drug.

Of note, the machine “passed” its manual check for leaks prior to the anesthetic. However, manual ventilation using the breathing bag often involves a downward force, which could cause separation of improperly manufactured equipment. Preinduction testing of the anesthesia machine for leaks does not involve this downward force, thus the problem was not identified. 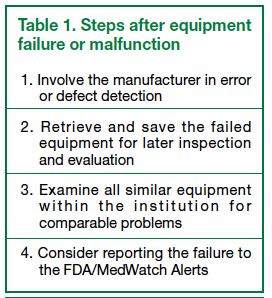 If no additional circuits had been available, alternate means of airway management would have had to include urgent tracheal intubation (without additional oxygenation and ventilation) and mechanical ventilation, the use of an Ambu bag, or the placement of the mask attached to the circuit over the patient’s face (using an appropriate manual seal) and using the anesthesia workstation ventilator. This last option bypasses the manual limb of the anesthesia machine and, in essence, has the bellows act as the breathing bag.

After an equipment malfunction, steps should be taken to ensure that other practioners do not suffer the same problem (Table 1). Regardless of the options, practitioners need to remember that despite following all usual safeguards and guidelines, equipment failure can still occur, and alternate plans of rescue are paramount for safe anesthetic care.