Methadone is a synthetic opioid with an exceptionally prolonged elimination half-life. It is modestly priced and has a unique ability among opiates to block NMDA receptors, leading to a resurgence in its use for chronic pain.1 In 2007, for example, over 4 million prescriptions were issued for methadone, most for chronic, non-malignant pain. Even though it has an association with torsades de pointes ventricular tachycardia, methadone has been dubbed the “darling of the pain management community.”

The number of unintentional overdose deaths from prescribed opioids now vastly exceeds unintentional deaths from all illegal drugs combined, and methadone plays a disproportionate role in such deaths. Sadly the intention to better manage chronic pain with methadone and other agents has led to what has been described in a recent editorial as “a rising tide of deaths.”2

Increasing perioperative and prescription opioid deaths have prompted leaders in patient safety to address the safe use of opioids. The Anesthesia Patient Safety Foundation, FDA, and others have sponsored summits and initiatives on patient monitoring and opioid safety. Pain medicine and operating room anesthesia providers should be well versed with current evidence-based guidelines for methadone use and standards for methadone monitoring.

Methadone is a phenylpropalamine synthetic opioid formulated as a racematic mixture of R and S enantiomeric forms. The S form may be responsible for QTc prolongation. Methadone is potent, has excellent oral absorption kinetics, and an inactive metabolite, EDDP. As a weak NMDA receptor antagonist, methadone is an attractive choice for chronic neuropathic pain syndromes. In humans the cytochrome P450 enzyme system, specifically CYP2B6 N-demethylation, is responsible for the majority of methadone metabolism, and CYP inducers or inhibitors dramatically change methadone elimination kinetics. 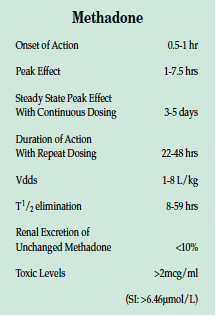 Methadone has an analgesic onset of .5 to 1 hour after oral administration, peaking in 1 to 7.5 hours. Steady-state peak effect may not be seen with continuous dosing for 3 to 5 days. Analgesic duration increases to 22-48 hours with repeat dosing. The Vdds is 1-8 L/kg, and methadone is highly protein bound (85-90%) with good bioavailability. The half-life elimination of 8-59 hours for methadone may exceed the duration of analgesia. Renal excretion of unchanged methadone is <10%.

Serum monitoring has been performed for prevention of opioid withdrawal and for forensic analysis. Toxic levels are considered to be >2 mcg/ml (SI: >6.46 μmol/L). CNS depressants act synergistically with methadone, and many methadone deaths also involve other drugs, most commonly alcohol and benzodiazepines.

After an exponential rise in methadone deaths in non-malignant pain patients, the FDA issued a public safety advisory entitled “Methadone Use For Pain Control May Result in Death and Life Threatening Changes in Breathing and Heart Beat”(Nov 2006). The FDA alert was quickly followed by the following black box warning by the manufacturer.

The manufacturers’ black box warning for methadone clearly identifies severe respiratory depression as the most important untoward effect of methadone administration. Methadone is a difficult drug to initiate, to titrate, and to convert to, or from, other opioids. In addition standards for serum or urine monitoring have not been well defined for chronic pain. Cases of iatrogenic overdose are thought to occur because peak respiratory depressant effects occur later and persist longer than analgesia.

Some clinicians endorse the concept of “no ceiling effect for opioid prescription,” a notion first promulgated to encourage adequate narcotic dosing for terminally ill cancer patients. The concept that there is no upper safe limit for opioid prescription is clearly inappropriate for methadone given the realities of the unique pharmacokinetics and patient responses to this drug.

Methadone serum monitoring has been employed for patients on maintenance for opioid addiction. Toxic levels used by medical examiners in forensic cases are those exceeding 2 mcg/ml (SI: >6.46 μmol/L). Respiratory depression and death have both occurred at levels well below those defined as toxic, while some patients appear to experience no toxicity at levels in the toxic range. Despite these observations, when treating chronic pain there seems no reason to ignore the accepted range for toxicity established for those who died secondary to methadone. 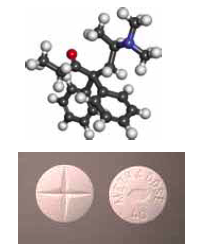 Serum methadone levels in chronic pain are useful to establish baselines, and thereafter, to identify levels known to be associated with toxicity. Therapeutic monitoring may also be useful when enzyme inhibitors are added or to correlate pharmacodynamic observations with a pharmacokinetic data point. At steady-state kinetics, dose increases will result in increased serum levels which may provide prescribers with a reasonable endpoint for opioid titration if levels approach or exceed those considered to be toxic for humans. Pain patients are frequently taking concomitant CNS depressants which impose independent risk for respiratory depression and perhaps for QT prolongation. Alcohol, benzodiazepines, and illicit drugs are frequently associated with methadone deaths, and patients should be monitored for their use through urine drug screening.

The FDA recognizes the importance of prescribing and monitoring with the current REMS initiative. The concept of therapeutic drug monitoring evolved primarily for drugs with narrow therapeutic ranges, non-linear and unpredictable kinetics, or serious dose-related side effects. Methadone is an ideal drug for therapeutic monitoring, and quantified serum or urine drug and metabolite levels are commercially available.

Clearly, much work remains to be done to refine therapeutic monitoring; however, new standards of care are beginning to emerge.

In November 2006, the FDA issued a safety alert regarding deaths and cardiac arrhythmias with methadone. The black box warning also includes the following relevant language

The QTc interval is slightly longer for women than for men and is frequently corrected for heart rate. The FDA industry standard for QTc monitoring in drug development and post-market ADEs is 450 ms independent of gender. A QTc interval of 500 ms or greater, for any gender, is considered significant for the risk of arrhythmia. Torsades does not occur in the absence of QT prolongation.

Experimental work has demonstrated that the common mechanism of drug-induced QT prolongation is blockade of hERG (human cardiac ether-a-go-go-related gene) which encodes Ikr. The Ikr, or delayed rectifier inward potassium channel, is responsible for resetting transmembrane cardiac muscle potential which then allows depolarization to occur. When repolarization is delayed torsade de pointes, a variant of ventricular tachycardia, may occur. The blockade of Ikr channels, and hence repolarization, is reflected as QTc interval prolongation on a surface EKG tracing. Methadone has been shown in vitro and in vivo to be a strong inhibitor of hERG. Absolute dose usually plays a significant role in QT effects with methadone. Doses >100 mg/day have been well studied and are associated with QTc interval effects which may reverse when dose is decreased. However, since sudden cardiac death has also been described with doses as low as 20 mg/day, therapeutic range is exceedingly narrow. Other factors influencing QTc include family or personal history of long-QT syndrome or sudden cardiac death, electrolyte abnormalities, structural cardiac disease, rhythm disturbances, CPY inhibitors, use of other QT prolonging drugs (especially cocaine), and total methadone dose. 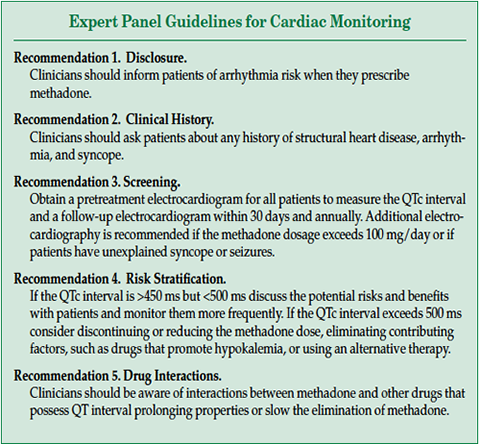 Dosing should be conservative, and respect delayed respiratory depression during titration. Incomplete cross tolerance and NMDA effects may result in acceptable analgesia at very low doses. A total daily dose not exceeding 120 mg/day if possible is preferable. Risk factors specific to the patient should be acknowledged such as sleep apnea, structural heart disease, benzodiazepines, and CYP inhibitors.

Serum methadone blood levels should be obtained during dose titrations and at steady-state to ensure that known forensic levels are not reached or exceeded. Urine drug screening is recommended to assess compliance and to detect illicit substances.

The expert panel approach to QTc monitoring and other recommendations provide a significant positive step toward risk reduction in patients taking methadone. Methadone should be used for patients in need, with careful attention to risk mitigation strategies.

Dr. Christie is an attending anesthesiologist in St. Petersburg, FL, and a clinical associate professor of surgery at the University of South Florida. She is a long-serving member of the APSF editorial board.