A 75-year-old, 100-kg, ASA 2 man was scheduled for endoscopic retrograde cholangiopancreatography (ERCP) under monitored anesthesia care (MAC). Monitors, including pulse oximetry, blood pressure, and ECG, were placed and the patient was turned prone for the procedure. He was given midazolam 2 mg and fentanyl 50 mcg IV, and he remained anxious. Additional midazolam 2 mg and fentanyl 150 mcg IV were given, but the patient could not tolerate insertion of the endoscope. Propofol 20 mg IV, followed by an infusion of 50-70 mcg/kg/min, was administered, and the procedure was begun with O2 saturations 88-92% on 4 L/min O2 by nasal prongs. After 20 minutes, the O2 saturation decreased to 70%, and the patient became severely bradycardic, and was treated with atropine 1 mg. Attempts at bag-mask ventilation and placement of a laryngeal mask airway failed. Blood pressure was not obtainable and the procedure was aborted. It took 2-3 minutes to push aside the heavy endoscopy equipment, move in a gurney, and turn the patient supine to begin CPR. Although the patient was resuscitated after 10 minutes of CPR, he sustained severe anoxic brain damage, and life support was eventually discontinued. 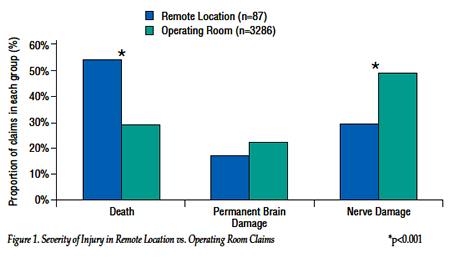 The demand for anesthesia care for procedures performed outside the operating room (out-of-OR) has dramatically increased in recent years. Advances in diagnostic and interventional procedures, constraints on operating room time and costs, and the desire of patients for sedation and lack of recall, all contribute to the increase in popularity of anesthesia in remote locations. The delivery of safe anesthesia care may be difficult in out-of-OR settings due to a variety of challenges, including cramped, dark rooms, inadequate anesthesia support, unfamiliar environment, and variability of monitoring modalities. Although the majority of procedures in remote locations are relatively non-invasive, serious adverse outcomes, such as illustrated in the above case, can occur.

Because of these safety hazards, we analyzed claims for injuries from 1990 and later in the American Society of Anesthesiologists (ASA) Closed Claims database to compare injuries associated with claims for anesthesia care in remote locations (n=87) with anesthesia injuries in the operating room setting (n=3286).1 The ASA Closed Claims Project is a structured evaluation of adverse anesthesia events obtained from closed malpractice claim files from professional liability insurance companies throughout the United States.2 Claims for dental damage are excluded. 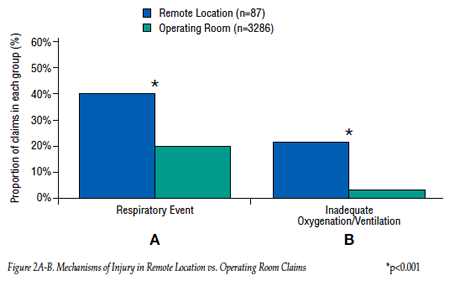 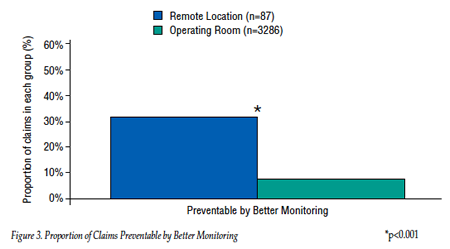 Respiratory depression due to an absolute or relative overdose of sedative-hypnotic-analgesic drugs was responsible for 26 remote location claims, accounting for more than half of the claims in the GI suite. Other oversedation claims also occurred in radiology (MRI scanner), the lithotripsy unit, and cardiology laboratories. Patient factors for oversedation were obesity, sleep apnea, ASA status 3-5, and age greater than 70 years.

Propofol was the most common drug used, either as a single agent or in combination with other drugs. Notably, a capnograph was employed in only a minority of claims associated with oversedation (15%) and no respiratory monitoring was used in 15% of these claims. Substandard care, preventable by better monitoring, was implicated in the majority of claims associated with death.

The above case illustrates the common clinical scenario for oversedation. The patient was sedated in a dark, cramped room, with intermittent intense procedural stimulation. Changing levels of noxious stimulation, pharmacokinetic features of the drugs, synergistic effects of polypharmacy, and variability of patient responses made sedation extremely challenging. The patient was breathing spontaneously, monitored by a pulse oximeter until apnea, desaturation, and bradycardia occurred, resulting in cardiopulmonary arrest and anoxic brain damage, with eventual withdrawal of life support. Delays in recognition and treatment of respiratory depression, as well as poor access to the patient, were at the heart of the problem!

In a report of 153 deaths occurring in the GI suite without the presence of anesthesia personnel, only half were monitored by pulse oximeter, and none by capnography.3 A pulse oximeter monitors oxygen saturation, not ventilation, which is accomplished by a precordial or esophageal stethoscope, capnography, or electrical impedance monitoring. Detection of apnea or hypoventilation by pulse oximetry alone may be delayed in patients receiving supplemental oxygen.4 Apnea lasting 20s or more is common in patients undergoing MAC and is not easily detected by clinical signs or pulse oximetry without the use of capnography or electrical impedance monitoring.5,6 Capnography alerts practitioners to respiratory depression and apnea before hypoxemia develops, especially if supplemental oxygen is used. The ASA recently revised its standards of anesthesia monitoring to include use of capnography during monitored anesthesia care, particularly during upper endoscopy procedures.7

While capnography is useful in all patients undergoing sedation and MAC, it is especially important for sedation of patients with probable or known obstructive sleep apnea. In such a case, strong consideration should be given to securing the airway with general endotracheal anesthesia (instead of deep sedation) for procedures with poor access to the airway, such as those in the prone position, MRI scanner, or lithotripsy unit, due to the difficulty of immediate airway control and cardiopulmonary resuscitation.

In summary, data from the ASA Closed Claims Project demonstrates that MAC in remote locations poses a significant risk for oversedation and inadequate oxygenation/ventilation due to delays in recognition of respiratory depression. Knowledge of the pharmacokinetic properties of sedative/analgesic drugs, careful monitoring of respiration including capnography, and vigilance can minimize the risk of patient injury in these challenging settings. In addition, general anesthesia with endotracheal intubation may be safer than deep sedation in some patients (e.g., obstructive sleep apnea) and procedures (e.g., prone position, MRI scanner, poor access to patient’s airway).