Epidural steroid injections are frequently performed for patients with lumbar and cervical radiculopathy, the accepted indications. A review of Medicare insurance claims carried out in 2001 indicated a procedure rate of 26.5 per 1000 nationwide among Medicare recipients 65 and older.1 The rate of serious complications resulting from these procedures is impossible to estimate in the U.S. because of the lack of mandatory reporting and the reluctance to report cases that are being or may become litigated. The ASA Closed Claims Project indicated that epidural steroid injections accounted for 40% of all claims involving pain management cases that occurred between 1970 and 1999.2 Fourteen cases of spinal cord injury were reported, of which 6 resulted in paraplegia and 1 in quadriplegia. With the rapid increase in procedure rates for epidural steroid injections since that time, the incidence of these devastating complications has undoubtedly increased. Given the potential for serious complications following epidural steroid injections, it is important that the procedure be avoided for patients who are unlikely to respond, such as those with purely axial back pain, neural claudication, and non-radicular sources of back and leg pain.

Unfortunately, physicians who participate as expert witnesses in malpractice claims report much of the information regarding spinal cord injury associated with epidural steroid injections verbally and informally. However, information from those sources as well as from the few published reports of complications can provide some insight into the mechanisms and causes of some very preventable complications.

The most likely causes of spinal cord injury following epidural steroid injection are epidural bleeding, epidural abscess, direct spinal cord trauma, and embolization of particulate matter into the arterial supply of the cord. The first 2 causes should be extremely rare with the use of meticulous aseptic technique and adherence to guidelines regarding the use of antithrombotic and thrombolytic agents (see Practice Advisory at ASRA.com). This discussion will concentrate on the 2 latter issues.

Some of the opinions and information presented here are based on medical records observed by physicians serving as expert witnesses in malpractice cases that are now closed. There are only a few published reports of such complications.

It is important to realize that although needle penetration of the spinal cord can produce injuries, with a wide range of severity, injection of any material into the cord is invariably devastating. It is critical, therefore, to insure proper needle placement prior to injecting anything, including contrast dye. The vast majority of serious injuries related to cord trauma are associated with cervical epidurals. Following are some suggestions that should help minimize the risk of serious injury:

Reports of spinal cord, brainstem, and cerebellar infarction following cervical transforaminal epidural steroid injections began to appear in the scientific literature in the early 2000s.7 It was postulated that such Injuries might result from accidental injection of particulate material into radicular arteries lying adjacent to the targeted nerve root. Demonstration of contrast dye spread into a radicular artery during transforaminal injection confirmed the likelihood of intra-arterial drug injection as a cause of ischemic injury,8 and it has been shown that essentially all commercially-available steroid suspensions contain particles large enough to occlude arterioles and capillaries.9 Spinal cord injury has also been documented following transforaminal steroid injections at lumbar, sacral,10 and thoracolumbar levels.11 During intra-arterial injection, contrast is likely to spread epidurally as well as intravascularly, and the thin pattern of intra-arterial spread is easy to miss.12 Digital subtraction fluoroscopy can enhance the visualization of the intravascular dye.8 Undoubtedly, the use of small gauge needles increases the likelihood of intra-arterial spread. The use of a pencil point side port needle does not appear to offer protection against this complication.13 Another possible mechanism of cord injury following foraminal injection is needle placement into the dorsal root ganglion. This structure is large and is positioned at the outer margin of the intervertebral foramen. The very short length of dorsal roots at this level (e.g., 1 cm) increases the likelihood of delivery of injectate into the substance of the cord.

Following are some suggestions to reduce the risk of intraneural injection or intra-arterial embolization of particulate steroids:

Epidural steroid injections can be helpful for hastening recovery from radiculopathy following disc herniation and can provide temporary relief for patients with chronic radicular pain. There is little evidence that they are of benefit for patients with axial back pain or neural claudication associated with spinal stenosis. There is little evidence that they reduce the need for spine surgery or that they improve long-term outcomes. It is important that patients understand the risks and benefits of these procedures and that we do everything possible to prevent rare but catastrophic neurological complications. 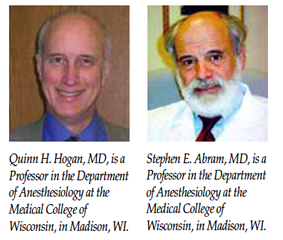