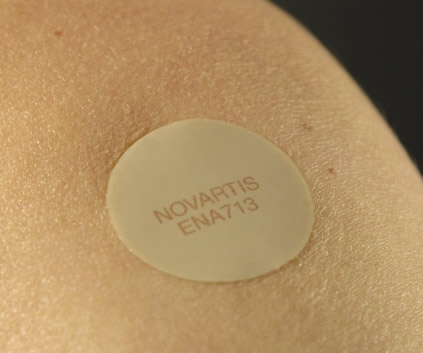 Figure 1. Rivastigmine, an acetylcholinesterase inhibitor, may be adminstered orally or as a transdermal patch (photo) for treatment of Alzheimer’s disease and may interfere with neuromuscular blocking drugs.

We would like to present a situation that may impact patient safety. Rivastigmine (Exelon) is a drug used to treat Alzheimer’s disease. It is an acetylcholinesterase inhibitor (AChI) designed to increase acetylcholine (ACh) in the central nervous system and improve memory. It was first approved in 2006 and a higher dose was approved in 2012 to treat mild to moderate Alzheimer’s disease.1,2 The drug is available in an oral form and, most concerning for anesthesiologists, a “skin colored” patch (transdermal delivery system). The patch is left in place for up to 24 hours and the pathophysiologic memory loss of Alzheimer’s might preclude anesthesia providers from learning of its presence.

The effect of AChI on neuromuscular blocking (NMB) drugs used in anesthesia is well described.3 Specifically, the resultant increased ACh from the inhibition of acetylcholinesterase can result in a resistance to nondepolarizing NMBs and sensitivity to depolarizing (succinylcholine) NMBs. The presence of AchI can dramatically affect both the dosing and monitoring of NMBs as well as their subsequent reversal, but the most pressing safety concern is the potential for unexpected patient movement if this drug interaction initially goes unrecognized.

Today, many patients with Alzheimer’s disease present for surgery. A high index of suspicion for AchI from an oral or transdermal source should be suspected and sought. If time permits, a rivastigmine patch should be removed at least 24 hours before any anticipated general anesthetic, but the effects of residual AchI should still be anticipated and tracked with neuromuscular monitoring. Other considerations for patients on AchI include a preference for regional anesthesia or the avoidance of NMBs if possible.

In summary, our profession has already learned from the fentanyl patch that transdermal delivery systems can profoundly alter anesthetic requirements and plans. The rivastigmine patch presents a new and unique safety threat because it specifically affects medicines that could affect patient movement, and it might be difficult in some urgent settings to even discern its presence.