Anesthesia care providers rely heavily on monitors and diagnostic devices for the safe passage of our patients. We believe that the technology we use in our practice has not only been thoroughly vetted by monitor and device manufacturers and the FDA, but also by academic physicians who have tested, compared these technologies to other systems, and published the results.

Hyperglycemia, defined in one study as 2 or more episodes of either a fasting glucose of 126 mg/dL or a random reading of 200 mg/dL, or greater, was shown to be a strong predictor of in-hospital mortality.1 Studies such as this and others that reported changes in patient outcomes secondary to controlling perioperative glucose concentrations drove increased blood glucose monitoring in the acute care setting. In particular, the single-center intensive insulin therapy trial from Dr. Van den Berghe’s group2 reported reduced mortality (8 vs. 4.6% at 12 months) and morbidity in a surgical intensive care unit (ICU) population dominated by cardiac surgical patients. This investigation compared controlling blood glucose between 80 and 110 mg/dL to a conventional treatment group (starting insulin infusions when the glucose was greater than 215 mg/dL). Ultimately, this study was shown to have limitations, but was credited with starting the wave of tight glucose control ICU algorithms, which appeared poised to engulf intraoperative glycemic management. Subsequently, a larger, multicenter, multinational NICE-SUGAR study, which was published in 2009,3 investigated mortality in medical and surgical ICU patients by comparing a cohort with a tight glucose target of 81–108 mg/dL to a conventional goal group of <180 mg/dL. The NICE-SUGAR investigators reported an increase in mortality in the intense insulin therapy group (27.5% vs 24.9% at 90 days) and a much higher incidence of hypoglycemia. The end result of these and other well-known publications was the increased scrutiny of the methods, accuracy, and interferences with blood glucose measurement in the hospital. Furthermore, learned societies and regulatory agencies have relaxed the goals for acute care glucose manangement. The general agreement is for a perioperative glucose target <180 mg/dL and the avoidance of hypoglycemia.4

There are a number of options for testing blood glucose levels in the hospital including the central laboratory device (CLD), blood gas machines (BGM), and point-of-care (POC) devices. In the perioperative environment, the most commonly used system is the POC meter.5 Until very recently these meters were the exact same devices used by patients with diabetes to measure their blood glucose at home. Although they have distinct advantages compared to CLDs and BGMs, including using very little blood volume (~5 microliters), speed of measurement (~5 seconds for testing) and being inexpensive (total direct cost ~$0.75/test), they are not nearly as accurate as CLD measurements. In addition, there are a number of interferences that are unique to these meters.6 This review will present the overall accuracy profiles, common interferences, and recent regulation of these POC glucose meters.

The commercially available POC meters use one of several enzyme systems for glucose measurements.5 Each technology has advantages and disadvantages, but none approach the accuracy of the CLD. Furthermore, a number of drugs interfere with their accuracy (see below). POC meters most commonly use capillary blood obtained from the fingertip although arterial or venous blood is used on occasion. In comparison, CLD and BGM samples are analyzed routinely on arterial or venous blood. One of the most common errors in measurement results from sample dilution from intravenous fluid or arterial line flush. This is called pre-analytical error, and practitioners must be careful to make sure this is not the cause of unexpectedly low glucose results.

There are two important methods to express the accuracy of POC meters. The first is the Bland-Altman method, which is a difference plot with the mean of the reference and the POC device displayed on the x-axis and the difference between the two plotted in the y-axis. Figure 1 shows a typical Bland-Altman plot, with each point representing one glucose meter measurement. If all of the points were along the “0” horizontal line, the meter would agree perfectly with the reference method. The spread in values shown in Figure 1 is representative of a typical meter result. It should be noted that the Stat-Strip® is the only meter currently approved for use in critically ill patients (although it is approved only for arterial and venous blood and not for capillary sampling). 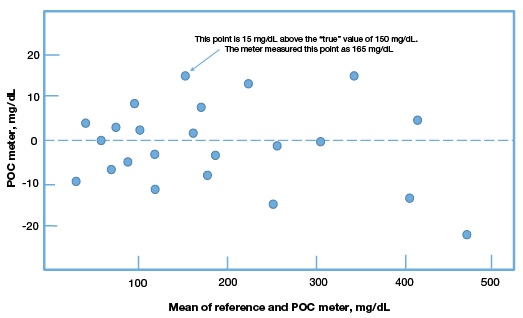 The second method commonly used to express POC meter accuracy is the Clarke error grid, which plots POC meters against laboratory reference in grids of increasing severity of the error (Figure 2). This method of data display is commonly used with POC meters to compare with CLD measurements. The severity of the error increases from A to E. Although the FDA does not rely on error grid analysis as frequently as they have in the past, the general rule is that the vast majority of the points should be in the A and B regions, with no points in the D or E regions. The A region is set so that these values are within 20% of the reference values. Obviously, a true glucose reading of 36 mg/dL that is reported as 180 mg/dL in the E zone could be fatal if insulin was administered to a patient thought to be hyperglycemic. 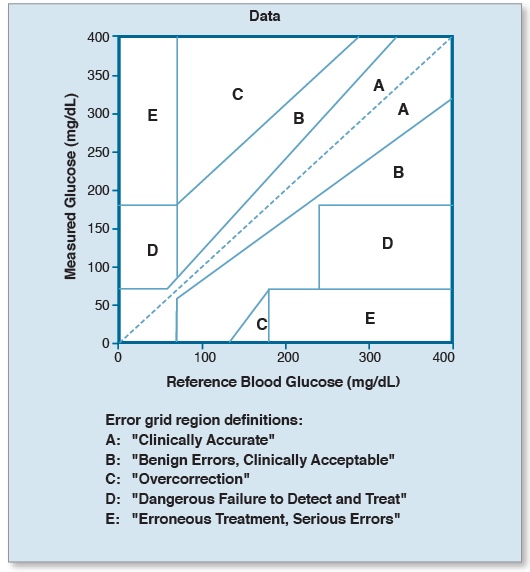 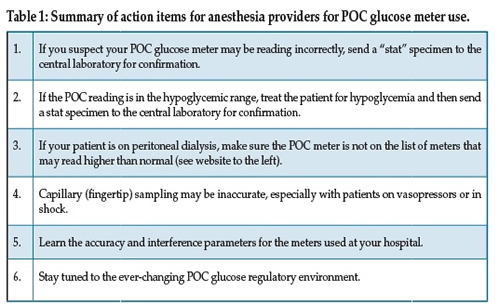 The accuracy profiles of the many POC meters on the market are all different. Some are more accurate in the higher glucose ranges, while others are more accurate in the lower ranges. In addition, the enzymes used in the measurements and the specific meter technologies change over time. It is therefore difficult to review historical literature and ascertain current accuracy profiles for individual meters. The same companies have different models of meters, with each having their own accuracy profiles. In addition, some manufacturers are now marketing meters specifically for the hospital markets, although sometimes their technologies are similar to the meters marketed for home use.

The sample site can also influence the accuracy of a glucose result. For example, the glucose concentration is usually slightly higher in arterial than venous blood. Fingertip sampling, which is also known as capillary blood, usually yields glucose results fairly close to venous blood; however, when perfusion to the fingertips is compromised, as in either shock or with the use of vasopressors, the glucose concentration can be much lower. In general, the sicker the patient, the more careful we need to be with POC glucose monitoring7 and it is always a good idea to send a venous or arterial sample to the central laboratory for analysis in these clinical situations.

There are a number of drugs that interfere with many of the POC glucose meters and all have some interferences. For example, ascorbic acid, acetaminophen, dopamine, and mannitol have all been reported to significantly affect the accuracy of some POC meters. Interestingly, with the recent uptick in the use of intravenous acetaminophen for perioperative pain control, there have been no studies reporting the accuracy of meters with this possible interferent.5

A very dangerous interaction can be seen with the use of some older POC glucose meters and patients on peritoneal dialysis (PD). Icodextrin, which is a commonly used component of PD, is metabolized to maltose. Many of the older meters read maltose as glucose and therefore reported a falsely high glucose. A 2013 article noted the tragic case of a 65-year-old woman who was undergoing continual peritoneal dialysis. Although her POC meter readings were steady in the 150-200 mg/dL range (she received a total of 115 units of insulin in 24 hours), her actual CLD glucose values were discovered to be in the 20-40 mg/dL range.8 She suffered a severe hypoglycemic brain injury secondary to the insulin infusion and she was discharged to a chronic care facility where care was withdrawn. Therefore, if your patient is on PD and you are using a POC glucose meter, make sure your meter is not on the list of meters that might read incorrectly. For a list of meters that should not be used with PD, see:
http://www.fda.gov/MedicalDevices/Safety/AlertsandNotices/PublicHealthNotifications
/ucm176992.htm attachment (accessed July 24, 2015).

The regulation of POC meters for hospital use is currently undergoing significant debate. In 2006, the Food and Drug Administration (FDA) issued accuracy guidelines, which called for 95% of device readings above 75 mg/dL to be within 20% of reference values and within 15 mg/dL for reference readings <75 mg/dL. Along with this guidance, the FDA document stated: “Clarify that critically ill patients (e.g., those with severe hypotension or shock, hyperglycemic-hyperosmolar state, hypoxia, severe dehydration, diabetic ketoacidosis) should not be tested with blood glucose meters because inaccurate results may occur.”9 Although the vast majority of the marketed meters didn’t meet even the 2006 standards, the FDA issued draft guidance in 2014 tightening the standards such that 99% of the readings >70 mg/dL needed to be within 10% and those <70 mg/dL had to be within 7 mg/dL.

Following this recent FDA draft guidance, the Centers for Medicare & Medicaid Services (CMS) issued a 2014 document, stating that if meters were not cleared for use with critically ill patients (none at the time were), they could not be used for these patients. Interestingly, “critically ill” was not defined.

After this CMS statement, hospital laboratory directors were left with a major problem. Since the vast majority of hospital glucose tests were done with POC meters, what should they do? In addition, critically ill was not defined, so which patients did this guidance apply to?

In May of 2014, a number of clinicians (including the first author) met with representatives from FDA and CMS to initiate dialogue concerning the stance of CMS that POC meters could not be used with critically ill patients.9 The discussion centered around several issues including possible alternatives, defining critically ill, and asking for a moratorium on the elimination of the meters from the hospital environment. The author presented his view that there is currently no realistic alternative to using meters in many ICUs and operating rooms. CLD measurements, although very accurate, can take up to an hour for results to be obtained. Other POC glucose measurement technologies (iSTAT® and HemoCue®) are more time-consuming, expensive, and are not available in many units. Finally, blood gas measurements do not have widely-known accuracy profiles and are not available in many operating rooms and ICUs.9

In March of 2015, following input from many stakeholders, CMS temporarily suspended its call for elimination of the meters from use with the critically ill. However, it is not known when this “moratorium” will be revisited.

Recommendations for anesthesia care providers Inoue and colleagues published a literature search analyzing 21 studies of POC glucose measurement devices in critically ill adults. Their conclusion was: “Because blood-glucose monitoring was less accurate within or near the hypoglycemic range, especially in patients with unstable hemodynamics or receiving insulin infusion, we should be aware that current blood glucose-monitoring technology has not reached a high enough degree of accuracy and reliability to lead to appropriate glucose control in critically ill patients.”7

Douglas B. Coursin, MD, is Professor of Anesthesiology at the University of Wisconsin School of Medicine and Public Health in Madison, WI.