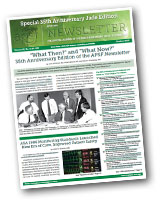 We provide anesthesia services for a small outpatient surgery center. During the ASA/FDA recommended pre-anesthetic checkout, 3 anesthesia machines failed the “breathing system pressure leak testing.” Standard troubleshooting methods were employed, including replacing anesthesia circuits, replacing water traps, and checking all connections and fittings without resolution. Further troubleshooting identified the failure in the gas sampling line connector. The gas sampling lines were not properly fused with the connector (see Figure 1). This defect was noted on multiple circuits, explaining why replacing the circuit did not correct the leak. The failure was immediately addressed by replacing the gas sampling lines. The quality assurance department of the circuit manufacturer was contacted to initiate corrective actions in the manufacturing process (see below).

I would like to provide you an update regarding Pall Medical’s investigation into sporadic reports of a leak with the Pall Ultipor™ Anesthesia Breathing Circuit System (Adult 72” Circuit) product code VM72COAX. The referenced leaks have been isolated to the gas sampling line where the tubing is bonded to the connector and have been detected during the pre-use ASA/FDA leak testing.

Returned samples were thoroughly tested and the report of a leak was confirmed. A root cause analysis has been conducted and the following potential causes were identified:

To reduce the potential for recurrence, the manufacturing facility implemented the following actions:

Pall Medical continues to monitor the effectiveness of the above actions and will implement additional improvements if deemed necessary.

We appreciate your interest in this matter and hope the information above meets your needs. If you should have any questions or should require additional assistance, please do not hesitate to contact the Pall Medical Customer Care Hotline at 1-800-645-6578.

The APSF Committee on Technology The information provided is for safety-related educational purposes only, and does not constitute medical or legal advice. Individual or group responses are only commentary, provided for purposes of education or discussion, and are neither statements of advice nor the opinions of APSF. It is not the intention of APSF to provide specific medical or legal advice or to endorse any specific views or recommendations in response to the inquiries posted. In no event shall APSF be responsible or liable, directly or indirectly, for any damage or loss caused or alleged to be caused by or in connection with the reliance on any such information.