The Origin of Ketamine 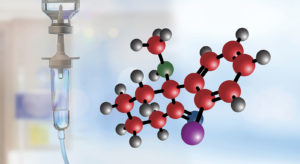 Since its synthesis in a Detroit laboratory nearly six decades ago, ketamine has proven to be a complex medication with unusual properties, heterogeneous, interconnected mechanisms, and diverse, sometimes contested, clinical uses.

Ketamine’s story begins in 1956 when scientists identified a new class of anesthetic medications called cyclohexaylamines.1 The first of this class of medications was called phencyclidine (PCP). In 1962, a new compound was discovered (CI-581) that possessed all of the positive qualities of PCP without major negative side effects such as severe excitation and profound psychosis.2 This new medication would eventually be called ketamine. In its initial study, several subjects who received ketamine described feeling as though they had “no arms or legs.” Others felt “like they were dead” and experienced vivid hallucinations. These descriptions led researchers to coin the term, “dissociative anesthesia”.2,3

Ketamine’s antagonism of the NMDA receptor is believed to be primarily responsible for its amnestic, anesthetic, and dissociative effects.4 NMDA receptor blockade has been shown to block memory formation in rodents.5 In addition, spinal NMDA receptors are intimately involved in central sensitization and therefore, repeated agonism may lead to hyperalgesia. Activity with NO synthase, GABA, and acetylcholine may also contribute to the unique and complex actions and side effects seen with ketamine.6

Metabolism of ketamine primarily occurs in the liver where ketamine is converted into norketamine, an active metabolite which also has potent anesthetic properties. In addition to the actions of norketamine, the lipophilicity of ketamine may be responsible for ketamine’s prolonged distributive half-life of 10–15 minutes following a standard intravenous induction dose of 1 to 2 mg/kg. Unlike other induction medications, patients who receive large doses of ketamine may develop nystagmus, pupillary dilation, and their eyes may not close despite reaching general anesthetic levels of the medication. Table 1 summarizes some of the common benefits and side effects of ketamine.

Table 1. Potential Benefits and Side Effects of Ketamine

The physiological and psychotropic effects associated with ketamine have been well described following the first human studies (Table 1). Increases in blood pressure, heart rate, contractility, and systemic vascular resistance led to the initial description of a sympathomimetic effect of ketamine.2 It is now known that this observed increase in sympathetic tone is secondary to adrenal catecholamine release triggered by ketamine. Interestingly enough, ketamine in isolation has a direct negative inotropic effect which is usually muted by this sympathetic surge. Caution should be used when inducing patients with high sympathetic tone (i.e., trauma patients) with ketamine as the cardio-depressive effects of ketamine may overwhelm potential catecholamine release by already-stressed adrenal glands. Prudence should also be exercised in administering ketamine to patients with severe coronary artery disease, as myocardial oxygen demand is disproportionately greater than increased oxygen delivery from ketamine administration. 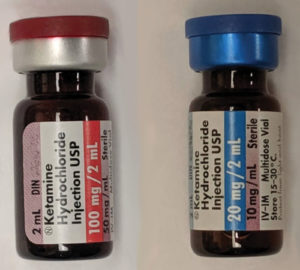 Ketamine is one of the few intravenous anesthetics that has minimal effects on respiratory patterns. Furthermore, its bronchodilatory effects may be beneficial specifically in asthmatic patients.7 The paucity of large randomized control trials along with heterogenous and unreported dosing regimens makes it difficult to determine an optimum bronchodilatory dose. Adverse respiratory effects such as increased airway secretions may be mitigated with the use of anti-sialogogues.

There are distinct electroencephalogram (EEG) patterns associated with escalating doses of ketamine as patients develop a gamma burst pattern (gamma oscillations interrupted by slow-delta oscillations), followed by a stable beta/gamma pattern.8 This EEG progression follows closely with a transition into the ketamine-induced unconscious state. Thus, because there is no isoelectric EEG state associated with ketamine, titrating anesthesitic depth to this pattern is not recommended.

Several historical papers have reported that ketamine increases intracranial pressure (ICP).9,10 It was postulated that increases in cerebral blood flow (CBF) and cerebral oxygen consumption led to this increase. Therefore, classic teaching was to avoid ketamine in neurological procedures. However, several of these studies allowed patients to breath spontaneously following an induction dose of ketamine, which may have falsly elevated the ICP due to hypercarbia induced vasodilation.11 There have been many recent challenges to this dogma. Current research suggests that when used in mechanically ventilated patients, in conjunction with other sedative medications, there is no increase in ICP.12–14 Data for the effect of sub-anesthetic ketamine on ICP is lacking, but when given at this lower, nonsedating dose, the effects on ICP are likely to be minimal.

Current Use in Anesthesiology

After ketamine was approved by the Food and Drug Administration in 1970, its first major widespread use was as a battlefield anesthetic during the Vietnam war.3 In 1985, the World Health Organization labeled ketamine an “Essential Medicine,” and it is now thought to be the most commonly used anesthetic in the world.15

In acute care settings such as the intensive care unit or emergency room, procedural sedation with ketamine has been used safely for decades.16 Its use intraoperatively has seen a renewed interest with the rise of the opioid epidemic. Ketamine, when given in sub-anesthetic doses, may reduce opiate tolerance and decrease opiate-induced hyperalgesia following surgery.17 When given to patients with chronic pain undergoing back surgery, ketamine has been shown to reduce pain scores and opiate consumption at various time points postoperatively.18 It may even be beneficial in opiate-naïve patients undergoing procedures with expected painful postoperative courses.19 Table 2 summarizes some commonly used dosing ranges of ketamine.

Ketamine’s use in neuraxial anesthesia has been controversial due to the potential for neurotoxicity from preservatives and direct neuronal cell apoptosis.20 However, both etiologies have only been seen in select animal models,21,22 and later studies have not demonstrated clinically relevent neurotoxicity in humans.23 This has led to several studies examining ketamine’s role in blocking the development of post-amputation stump pain24 and reduction of post-thoracotomy pain.25

Ketamine is used often by acute pain services to treat postoperative pain not relieved with standard opioid patient-controlled analgesia (PCA) regimens. Nonsurgical patients presenting with acute or chronic pain exacerbations such as vaso-occlusive crises from sickle cell disease may also benefit from ketamine.26 Dosing is generally lower with infusions less than 0.3 mg/kg/hr, with or without a bolus. The addition of ketamine infusions can reduce opioid consumption and enhance the transition from PCA to oral opioids. There is even evidence to suggest ketamine-containing PCA solutions (1 to 5 mg/bolus) can improve pain control and reduce opioid consumption.27

Contraindications to ketamine include pregnancy, liver dysfunction, significant coronary disease, and psychosis (Table 3). Elevated ICP, as described previously, does not occur in sedated patients under controlled ventilation. Elevated intra-ocular pressure (IOP) is a commonly listed contraindication based on early studies,28 but recent evidence suggests minimal fluctuations of IOP.29 The mechanism is thought to be due to changes in extraocular muscle tone.28

Given intra-operatively, standard American Society of Anesthesiologists (ASA) monitoring should be applied whether ketamine is used as the sole anesthetic or as an analgesic adjunct. Sub-anesthetic dosing of ketamine still carries risk of airway compromise, cardiovascular perturbances, and psychomimetic events. In acute care settings, blood pressure, electrocardiogram, and pulse oximetry should be available. According to The Consensus Guidelines on The Use of Intravenous Ketamine for Chronic Pain from the American Society of Regional Anesthesia and Pain Medicine (ASRA), the American Academy of Pain Medicine (AMPA, and the American Society of Anesthesiologists (ASA),30 supervising practitioners should be Advanced Cardiovascular Life Support (ACLS) certified and meet ASA requirements for moderate sedation. Individuals who administer ketamine should hold at least a registered nursing degree, received training in moderate sedation and ketamine pharmacology, and be ACLS certified.

Ketamine as an Antidepressant

Ketamine is produced as a racemic mixture of esketamine and arketamine. In March 2019, scientific and public interest in ketamine erupted with the FDA’s approval of esketamine, racemic ketamine’s positive enantiomer, as a first-in-class antidepressant medication for the management of treatment-resistant depression.31

Ketamine demonstrates robust antisuicidal and antidepressant properties.32 But as an antidepressant, it may exert categorically different effects at different serum concentrations, and its effects may not follow standard dose-response curves. At doses well above full induction anesthetic doses, ketamine’s antidepressant effect does not appear to be greater than at sub-anesthetic doses. In this regard, it resembles other psychiatric medications such as trazadone, a common multimechanism medication that functions as a sedative at doses below 150 mg but as an antidepressant at doses above 150 mg.33

Ketamine’s antisuicidal and antidepressant mechanism of action may be due to serum glutamate concentrations following AMPA activation. In general, clincians at academic centers who administer intravenous ketamine to patients as a treatment for depression have, until somewhat recently, gravitated toward a dosing regimen of 0.5 mg/kg over 40 minutes (Table 2).34 This tendency reflects the preponderance of research at this dose, which corresponds to a serum concentration of approximately 2000–3000 ng/mL. Treatments are typically administered 1 to 3 times per week. However, ketamine protocols are not widely shared, and a variety of different dosing regimens exist in various centers, with both research and experience in practice suggesting the utility of cautiously up-titrating doses.

Similar to anesthesia society guidelines,30,36 the American Psychiatric Association recommends that providers administering ketamine in outpatient settings should be ACLS certified.34 Ketamine’s low likelihood of producing respiratory suppression when used at low doses has contributed to its perception as a relatively “safe” medication at low doses. While the sympathomimetic effects (elevated heart rate and blood pressure) are often seen with anesthesia induction doses, these changes are uncommon when sub-anesthetic doses are administered.35 Monitoring during sedation, at a minimum, should include continuous pulse oximetry and blood pressure checks every ten minutes.35 Likewise, when used in the context of active suicidal ideation or severe depression, the psychiatric effects, both short and long-term, must be followed and managed to ensure patient safety.34 Prior to treatment, patients are interviewed to assess their baseline symptoms and response to treatment. After the infusion is complete, patients typically recover for 30 minutes to 2 hours before they are discharged with an escort. It should be noted that these guidelines are specific to our practice and other institutions are likely to have different monitoring and treatment pathways. Further evidence-based recommendations are needed before widespread adoption of one set of guidelines.

Ketamine is an old drug that is experiencing a new emergence of interest among clinicians in perioperative medicine and depression management. With progressively more patients suffering from chronic pain who require pain management without opioids, and with evolving utility at minute doses in the treatment of depression and potentially other psychiatric disorders, this old drug now has further applications for patient care. However, further investigation is forthcoming as to the appropriate monitoring for administration of this drug in postoperative and outpatient settings.

Dr. Kung is a resident in Anesthesiology at Massachusetts General Hospital, Boston, MA.

Dr. Meisner is the medical director of the Ketamine Service at McClean Hospital in Belmont, MA and assistant in psychiatry at the Massachusetts General Hospital, Boston, MA.

Dr. Ellis is an instructor of Anesthesiology at Massachusetts General Hospital, Boston, MA.

Drs. Kung, Berg, and Ellis have no conflicts of interest. Dr. Meisner has served on advisory boards for Janssen Pharmaceutical.