This incident illustrates the potential for delivering a severely hypoxic gas mixture to a patient during transport when a portable cylinder of compressed gas is required. Existing standards are inadequate to prevent this error.

Safety standards for compressed medical gases and their labelling and delivery have improved over the last several decades. But despite efforts to strengthen standards for labeling and administration of medications, drug errors continue to be a leading cause of adverse events among patients undergoing anesthesia.1 Misidentification of ampules, vials, and syringes is a well-recognized source of drug swap errors. We report a case where carbon dioxide was administered to a patient from a portable compressed gas cylinder—instead of oxygen­—rapidly leading to severe hypoxemia during transport. We suggest that compressed medical gases should be classified in the same category as medications. For instance, safety experts now recommend standards for labelling drug ampoules and vials, as well as a bar code system for drug verification in the operating room.2 Our case illustrates that similar identification systems and additional fail-safe delivery systems should be considered with the administration of all portable medical gases. 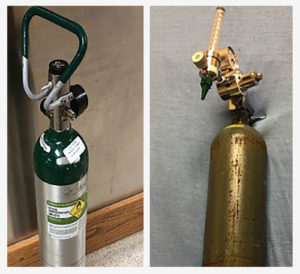 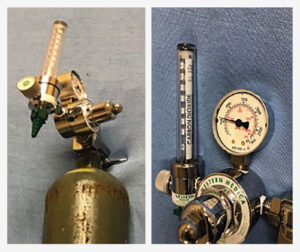 A 62-year-old female, status post orthotropic heart transplant complicated by coronary artery vasculopathy, presented for repeat heart transplantation. After anesthesia induction and placement of invasive monitoring, the operation was suspended due to problems with the placement of the donor lungs. After hours of delay, the operation resumed. Re-do cardiac transplantation and separation from cardiopulmonary bypass proceeded without incident. At the conclusion of surgery, the patient was transferred from the operating room table to the transport ICU bed. Surprisingly, as the patient was connected to our standard Air Mask Bag Unit (AMBU—Copenhagen, Denmark) with an E cylinder of (presumed) oxygen (Figure 1), she became hypotensive with a rapid decrease in oxygen saturation (from 99% to 80%). She was immediately reconnected to the anesthesia machine ventilator with FiO2 = 1.0, while small boluses of vasopressors stabilized her hemodynamics. After several minutes of stability of all vital signs, a second attempt to ventilate the patient with the same AMBU setup began, but again the patient’s blood pressure and saturation quickly declined. After a return to the anesthesia machine ventilator, vital signs again quickly normalized. At this point, it was decided to transport the patient with a dedicated ICU transport ventilator. When the E-cylinder was being removed from the bed, it was discovered that it was actually a carbon dioxide cylinder with a regulator, flowmeter and a green administration connector (“nipple”) that can be readily connected to oxygen AMBU delivery tubing (Figure 2). The patient was successfully transported to the ICU and made an uneventful recovery.

Medication errors often increase patient morbidity and even mortality.3 Drug (or syringe) swaps account for nearly 50% of medication errors associated with anesthesia professionals and often result in serious outcomes.2,4 In the present case, the substitution of the compressed carbon dioxide gas cylinder—mistaken for an E cylinder of oxygen—represents a drug swap error.4 While current anesthesia machines are replete with safeguards and monitors to prevent delivery of a hypoxic gas mixture during anesthesia, no such standards exist during transport of a critically ill patient. Indeed, this case illustrates how easily conventional equipment in the cardiovascular operating room can be assembled and deliver an anoxic gas mixture. Therefore, we posit that compressed medical gases should be treated with safety protocols such as standardizing the design (as well as color coding) of medical gas cylinders, requirements for a more robust labelling system, a redesign of tubing and connectors to gas cylinders that prevent “drug swaps,” and perhaps the addition of oxygen sensors to portable gas delivery equipment.

Following a root cause analysis (RCA) of this event, our institution made the following changes to operating room (OR) policy and procedures:

Dr. Sathappan Karuppiah is an anesthesiology resident at the University of Minnesota.

Dr. Roy Kiberenge is assistant professor, Department of Anesthesiology at the University of Minnesota.

Dr. Richard Prielipp is professor, Department of Anesthesiology at the University of Minnesota.

The authors have no conflicts of interest. Richard Prielipp is executive section editor of the APSF Executive Committee and Executive Section Editor of Patient Safety, Anesthesia & Analgesia.