Letter to the Editor:

Cryoablation is increasingly used to treat unresectable malignant tumors. During cryotherapy it may not be possible to immediately remove the freezing element from an organ in an emergency without active thawing. We recently cared for a patient that illustrated the risk of the frozen instrument during cryotherapy of the kidney in the prone position and the benefits of proactive communication.

A 65-year-old man was scheduled for a computed tomography (CT)-guided percutaneous cryoablation of a right kidney tumor. The patient had multiple medical problems including obesity, obstructive sleep apnea, and a difficult airway. The procedure, which was to include multiple advancements and withdrawals of the patient inside and outside of a CT scanner, was to be performed under general anesthesia with an endotracheal tube and in the prone position.

Once the freezing process was initiated, the patient could not be immediately turned supine in the event of an emergency.1 Therefore, the interventional radiology (IR) team agreed to verbally notify the anesthesia team who would perform a quick check to rule out any airway or hemodynamic issues. The treatment was concluded uneventfully and the patient was turned to the supine position and his trachea was extubated upon full awakening. 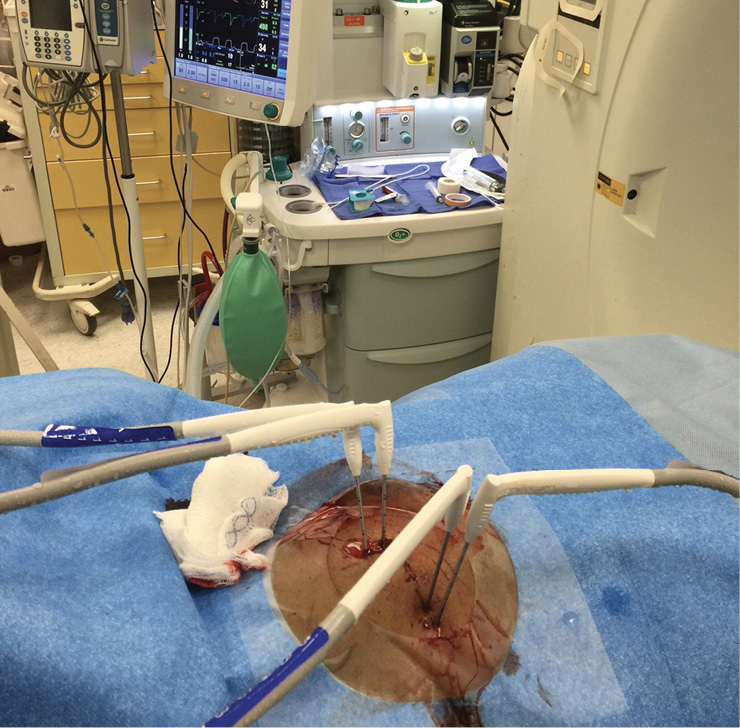 Percutaneous cryoablation is increasingly utilized to treat small renal masses that are concerning enough to warrant treatment but reside in poor surgical candidates.2 Renal masses are frequently approached posteriorly which requires the patient to be in the prone position. The probes will be firmly anchored to the patient’s tissues during the tumor freezing process. They are either allowed to thaw spontaneously, which takes approximately 10 minutes, or they are actively thawed, which takes up to 2–3 minutes. Any attempt to forcibly remove the probes prior to complete thawing may result in tissue avulsion and hemorrhage.3

During cryotherapy the anesthesia professional needs to be familiar with the potential risk of the frozen instrument. Communication with the proceduralist before the start of each freezing cycle is important for patient safety.

Dr. Hannallah is an Associate Professor in the Department of Anesthesiology at Medstar Georgetown University Hospital in Washington, DC.

Dr. Parekh is a resident physician in the Department of Anesthesiology at Medstar Georgetown University Hospital in Washington, DC.

Dr. Baghai was an interventional radiology fellow in the Department of Radiology at Medstar Georgetown University Hospital, and is currently employed with Mid-Atlantic Permanente Medical Group, Rockville, MD.

Drs. Hannallah, Parekh, and Baghai report no conflicts of interest for this article.