The earliest description of curare, a naturally occurring predecessor of the neuromuscular blocking agents commonly used today in anesthesia, has been attributed to Sir Walter Raleigh in his 1596 book, The Discoverie of the Large, Rich, and Bewtiful Empyre of Guiana, in which he describes, “the most strong poyson on their arrows” used by an indigenous tribe of Guiana.1 However, Ibanez cites numerous descriptions by Spanish explorers of lethally tipped arrows used by natives of northern South America in the century preceding the publication of Raleigh’s book.2

Although Ibanez also describes therapeutic uses of what may have been curare, it was not until 1932 that West described experiments in patients with rigidity disorders at the Hospital for Epilepsy and Paralysis in Maida Vale, London; he concluded, (there was) “a definite, measurable reduction in the muscular rigidity resulting from diseases of the pyramidal and extrapyramidal motor system…[at] doses which produce no detectable signs of weakness.”3 An early therapeutic use in humans to prevent fractures occurring with convulsive therapy for depression was described by Bennett in 1940.4 The earliest description of the use of curare in general anesthesia to achieve muscle relaxation during surgery we have found was at the Homeopathic Hospital of Montreal by Griffith, published in 1942.5 In 1954, Beecher and Todd, both at Harvard and the Massachusetts General Hospital, reported their massive study of 599,548 anesthetics in 10 university hospitals in the U.S. between 1948 and 1952.6 They undertook this study because of their, “…belief that anesthesia has an unnecessarily high death rate.” All deaths were classified by a surgeon and anesthesiologist at each hospital; however, precise criteria for cause of death were not provided. A muscle relaxant was used in 2.8% (16,560), which was tubocurarine in 55%, decamethonium bromide in 37%, and succinylcholine in 4% of cases. They found 6 times as many anesthetic deaths were associated with “curare,” compared to patients managed without. Recognizing the need for risk-adjustment, 13,204 patients sampled in 1952 were classified as “good or poor physical status” (this was not the ASA classification, which had been published in 1941,7 but rather a seven-point scale devised by the authors, which was effectively similar to the ASA classification). The distribution of this scale was similar between patients receiving a NMB and those not.

Acetylcholinesterase inhibitors, such as neostigmine, are commonly used to reverse NMB at the conclusion of surgery; however, they may have unwanted side-effects such as tachycardia, nausea, confusion, constipation, and dry mouth.12 More importantly, when used without appropriate nerve stimulator monitoring and dosing, they may actually increase NMB by creating very high concentrations of acetylcholine at the neuromuscular junction, which can have an antagonistic effect.13 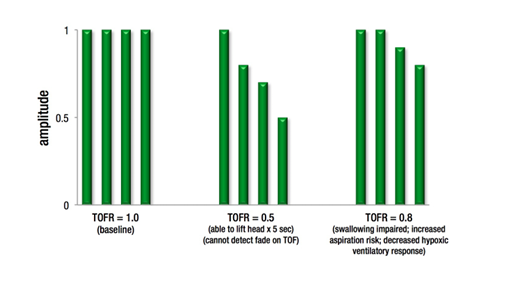 Train of four ratio (TOFR) correlation with clinical signs of reversal and ability to detect fade with TOF.

There are surprisingly few publications of adequate sample size examining the effect of NMB with and without a reversing agent on substantive outcomes important to the patient. Two of the largest studies examining this issue had significant limitations with respect to propensity matching for patient co-morbidities and/or for administration of neostigmine. These issues limit the clarity of the associations between poor outcomes and the use of NMB agents, reversal, inadequate monitoring, and inadequate reversal. These relationships are difficult to study in a retrospective manner with incomplete datasets and variable practice patterns and are better examined in large prospective studies.14,15 While some providers may believe that near complete spontaneous recovery does occur by the end of a surgical procedure without the use of NMB reversal agents, a variety of studies contradict this notion. One most notable large clinical trial by Debaene and colleagues in more than 500 patients suggested that 45% of patients examined after a single dose of an intermediate acting NMB (without a NM reversal agent) had a TOFR <0.9 in PACU.16 In addition, even 2 hours after administration of a single intermediate acting NMB, the TOFR was < 0.7 in 10% of patients and < 0.9 in 37% of the patients studied. Therefore, cautious titration of NMB reversal by using NM monitoring may reduce the risk of residual neuromuscular blockade.

Naguib and colleagues conducted an internet survey of active members of the Anesthesia Patient Safety Foundation and the European Society of Anaesthesiologists in 2008; 2,636 completed surveys were received.17 We did not find a more recent survey of U.S. anesthesiologists. The majority of both U.S. and European respondents estimated the incidence of clinically significant postoperative residual neuromuscular weakness to be <1%. Routine pharmacologic reversal was reported by 18% of respondents in Europe and 34% in the U.S.

There is a consensus in the recent literature that residual neuromuscular blockade is common and is associated with an increased risk of adverse outcomes, particularly respiratory. It is also clear that the use of NMB monitoring and appropriate reversal with neostigmine is highly variable among anesthesia providers and is thought to be primarily responsible for the high incidence of residual NMB in the recovery room.

The authors report no financial conflicts of interest related to this article and topic.