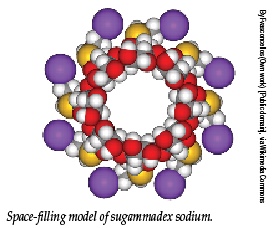 The Neuromuscular Research Group at Organon Newhouse Scotland (east of Glasgow) had been working on the development of fast-onset, short-acting, nondepolarizing steroidal neuromuscular blocking agents since the 1960s, which led to the development of pancuronium, vecuronium and rocuronium. Shortly after the launch of rocuronium, questions arose about a possible action of rocuronium on smooth muscle neurotransmission, so Dr. Anton Bom was contacted. Dr. Bom was performing smooth muscle studies at the same research site. Rocuronium is not very water soluble, so buffer solutions with a pH of 4 are required. Dr. Bom attempted to dissolve rocuronium in organic solvents that were traditionally used for smooth muscle studies, none of which were able to solubilize rocuronium. Next, he decided to examine cyclodextrins, which were demonstrated to dissolve steroidal hormones. Cyclodextrins are rigid, ring-shaped molecules composed of sugar units. The outside of the cyclodextrin is hydrophilic, which makes the molecule water-soluble. The hole in the middle of the cyclodextrin ring is hydrophobic, which allows lipophilic molecules, like steroids, to enter this cavity, creating water-soluble complexes.1

Since rocuronium has a steroidal nucleus, Dr .Bom speculated that rocuronium would form complexes with cyclodextrins. This binding would prevent rocuronium from acting on the nicotinic acetylcholine receptor and allow rapid reversal of neuromuscular blockade. His initial studies confirmed that rocuronium formed complexes with cyclodextrins. However, this binding was weak, allowing rocuronium to easily disassociate. Several modifications of the molecule were required to increase affinity. The cavity of the cyclodextrin was too small, so the cavity had to be extended by the addition of side-chains to each sugar unit. To ensure that the side-chains did not enter the cavity, negatively charged end-groups had to be attached to the side-chains. These modifications would allow a tight complex to form between the quaternary nitrogen of the rocuronium and the negatively charged ends of the side-chains. Dr. Ming Qiang Zhang, a medical chemist, then provided a long list of commercially available cyclodextrin molecules. The pharmacologists created in-vitro and in-vivo screening models, which allowed the creation of new cyclodextrin derivatives.1

In March of 1999, the first batch of Org 25969 (now known as sugammadex) was produced. In all pharmacological screening tests, this molecule showed the desired profile.

Both the concept of using modified cyclodextrins as reversal agents and the structure and synthesis of sugammadex and related cyclodextrins were patented in 2001. The first human study was performed in healthy volunteers and published in 2005.1 This investigation demonstrated that 3 minutes after the administration of a normal intubation dose of rocuronium (0.6 mg/kg), 8 mg/kg of Org 25969 could completely reverse neuromuscular blockade. Since the publication of this initial investigation, sugammadex has been administered to over 6000 patients in clinical trials. In addition, sugammadex is approved in 57 countries, with approximately 11.5 million patients receiving the drug as of March 2015.1

The first regulatory approval was in the European Union in 2008. In 2007, an application for approval to the FDA was submitted. In 2008, the FDA Advisory Committee unanimously recommended approval. However, the FDA issued a Not-Approvable Letter at this time. The FDA requested further characterization of sugammadex on repeat exposures due to concerns over hypersensitivity and anaphylactic reactions, as well as possible mechanistic causes of events. In the initial submission, there was one case of anaphylaxis and 31 cases of hypersensitivity. In addition, a small prolongation of aPTT and PT was noted in an in-vitro study.3 Further studies evaluating the effects of sugammadex on surgical bleeding were also requested. Finally, the need for additional studies examining the effects of sugammadex on cardiac arrhythmias and QT prolongation was noted.

In response to the FDA’s requests, 4 additional studies were conducted examining the impact of sugammadex on coagulation. These investigations demonstrated a small increase in PT and aPTT that occurred within minutes of administration, but resolved within an hour. In addition, in a large study of patients undergoing hip or knee replacement surgery, no increase in bleeding or transfusion requirements was observed in patients randomized to receive sugammadex.3 In order to address concerns related to cardiac arrhythmias, an analysis of phase 2 and 3 clinical studies was conducted, as well as an analysis of postmarketing data.4,5

These study findings indicated that QTc was not prolonged in patients given sugammadex. The studies also indicated that arrhythmias did not occur with greater frequency with sugammadex compared to neostigmine, although bradycardia can occur with both agents. Finally, a randomized, double-blind, placebo-controlled study in healthy volunteers was conducted to evaluate the incidence of allergic reactions to sugammadex.6

In 2012, another submission for approval was sent to the FDA. In 2013, a Complete Response Letter was provided to the sponsor. The FDA reported that protocol violations in the hypersensitivity study had been observed, which raised data reliability issues. However, bleeding and arrhythmia risks had been adequately addressed. In 2014, the sponsor resubmitted a new hypersensitivity trial in awake volunteers. A total of 375 awake subjects were given 3 intravenous doses of sugammadex (4 mg/kg, 16 mg/kg, or saline), and patients examined for hypersensitivity or anaphylactic reactions. One case met the criteria for anaphylaxis in the 16 mg/kg dose group (no hypotension or wheezing, treated with steroids and diphenhydramine), although the mechanism was unclear (no tryptase or IgG/IgE specific for sugammadex). Furthermore, no cases of anaphylaxis were reported in 3,519 patients administered sugammadex in clinical trials. Finally, in postmarketing data, 273 reports of anaphylaxis were reported in approximately 11.5 million sugammadex exposures, with 237 of 241 patients recovering with standard therapy.6

In 2015, a second Complete Response Letter was sent to the sponsor. At one site of the hypersensitivity study, staff who dosed subjects in one cohort performed adverse assessments in a different cohort. The FDA requested additional site inspections and sensitivity analysis. In November of 2015, the FDA again convened to review the resubmitted data. After review of all submitted studies as well as postmarketing data, the FDA Advisory Committee again unanimously recommended approval.7 Approximately 8 years after the initial FDA submission, sugammadex , owned and marketed by Merck, received FDA approval on December 16, 2015.

Sugammadex represents a novel and new drug, which offers several important advantages over current anticholinesterase reversal agents. Deep levels of neuromuscular blockade (train-of-four (TOF) count of 0, post-tetanic count of 1–2) can be reversed effectively with 4 mg/kg of sugammadex within 3 minutes, whereas neostigmine is ineffective in antagonizing deep blockade. At moderate levels of neuromuscular block (TOF count of 2), the mean time to achieve full recovery (TOF ratio of 0.9) with sugammadex is 1.5 minutes versus 19 minutes with neostigmine.8 Furthermore, in urgent or emergent reversal of large doses of rocuronium (1.2 mg/kg), the mean time to neuromuscular recovery is significantly faster with sugammadex (16 mg/kg) compared to spontaneous recovery with succinylcholine.9 Sugammadex will allow increased flexibility of neuromuscular management in the operating room; deep blockade can be maintained until the end of surgery if required and then quickly reversed. Most importantly, the risk of residual neuromuscular blockade in the PACU can be significantly reduced if sugammadex is appropriately dosed. In the absence of consistent neuromuscular blockade monitoring with peripheral nerve stimulators and/or specified guidelines for reversal, recent data has demonstrated that the risk of residual block in the PACU can be reduced from 43% in patients given neostigmine to 0% in those given sugammadex.10 Finally, data from phase 1–3 clinical studies, volunteer subject investigations and post-marketing data in over 12 million patients have demonstrated that sugammadex is safe, with a rare risk of anaphylactic reactions that are treatable with standard therapy.7

The adoption of sugammadex by hospitals, pharmacies and anesthesia providers may be impacted by cost concerns. As with all newly FDA-approved drugs, anesthesia providers should be aware that post-marketing surveillance provides a vehicle for communicating with the FDA about any concerns of adverse events that may be associated with this new drug.

Financial Disclosure: Dr. Murphy discloses that he is on the advisory board of Merck and has served as a consultant for Merck and CASMED.