The advent of novel oral anticoagulants is shifting the management of bleeding care in the operating room. As more patients transition to these new anticoagulants, which lack specific antidotes, it is important that we consider how we will manage and assess these patients. Our case report presents a patient on the anticoagulant apixaban (trade name Eliquis) and how we managed an uncontrollable spontaneous bleed during his elective surgery. 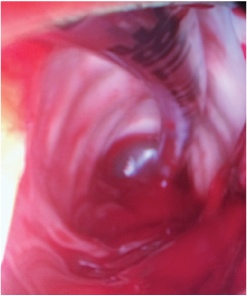 Figure 1. The site of the surgical bleed. 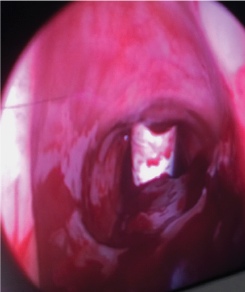 Figure 2. Placement of tracheostomy with presence of clot. 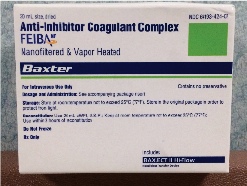 A 69-yr-old male (ASA III; 84 kg) presented for ENT evaluation after an MRI for cervical spine issues revealed a cricoid lesion. The submucosal mass of the cricoid cartilage extended onto the right posterolateral aspect, and was obstructing approximately half of the airway. With a high suspicion for chondrosarcoma, it was decided that biopsy and excision of the incidentally-found lesion would be appropriate management. With a significant past medical history of atrial fibrillation, the patient was asked to consult cardiology for recommendations on how to manage his anticoagulation. Based upon their recommendation, the patient’s apixaban was held 24 hr prior to operation.

In the operating room, the patient was induced with propofol and then intubated with a 4.0 MLT. Sevoflurane was used as the maintenance anesthetic. After biopsies of the lesion were obtained using up-cup forceps with microscopic visualization, a Coblator was used to debulk the lesion further. With no direct vessel visualized to be arterial or requiring ligation, a consistent ooze began from the cricoid lesion.

To make the wound bed hemostatic, attempts were made using epinephrine-soaked pledgets and direct pressure with the up-cup forceps. Failure of these methods to resolve the bleeding led to the use of laryngeal cautery, which was also unsuccessful. Given the concern for continued hemorrhage, or rapid re-bleed if the wound was made hemostatic, and the inability to protect the airway, a tracheostomy was indicated. After performing a tracheostomy, the patient’s airway was reassessed. The oral cavity and nose both had a copious amount of blood and clot present (Fig. 1). An estimated 500 ml of clot was noted in the oral cavity, oropharynx, and nasopharynx. Without an identifiable source and continued bleeding, reversal of the anticoagulant, Apixaban, was indicated (Fig. 2).

Consultation with OR pharmacy revealed there is no known antidote for apixaban, although they recommended administrating FEIBA, an anti-inhibitor coagulant complex, in an off-label manner to control the hemorrhaging (Fig. 3). Over an infusion of 20 min, the patient received 2116 units of FEIBA (25 units/kg). During this time, continued efforts to control the bleeding were made with additional cautery, pressure with an 8.5 endotracheal tube with a 20 cc air inflated cuff over the lesion, and thrombin soaked gelfoam. After completion of the FEIBA infusion, hemostasis was achieved with an estimated blood loss of 800 cc.

The patient was transferred post-op to PACU where cardiology was consulted regarding restarting anticoagulation and risk of clot development. Repeat laryngoscopy was performed to confirm no postoperative bleeding and hemostatic stability. With no postoperative bleeding and continued stability, the patient was discharged a few days later with tracheostomy in place with plans to decannulate at a later date with follow-up.

The last few years has seen the introduction of 2 classes of novel oral anticoagulants, direct thrombin inhibitors (dabigatran) and factor Xa inhibitors (rivaroxaban, apixaban). These new agents have rapidly gained popularity due to their significant advantages over the traditional vitamin K antagonists, which include more rapid onset, shorter half-lives, fewer drug interactions, and the lack of need for routine monitoring.1 The only obstacle to these agents being widely adopted is the absence of a reversal agent for their anticoagulant effects. Our case report tackles the issue of managing spontaneous surgical bleeding in a patient on apixaban anticoagulation therapy.

Apixaban is an oral, reversible, direct active-site inhibitor of free and clot bound factor Xa. As an effector in the final common pathway of the coagulation cascade, factor Xa mediates the activation of prothrombin to thrombin. With its predictable pharmacokinetics and pharmacodynamics, apixaban reaches peak plasma level 3 hr after administration and has a half-life of 10-14 hr with partial renal excretion (25%).2 For patients with normal renal function, as determined by a creatinine clearance greater than 30 mL/min, the expert opinion is to cease anticoagulation 24 hr prior to low-risk surgery and 48 hr prior to high-risk surgery.3 These times are doubled for patients with impaired renal function (creatinine clearance <30 mL/min).3

With our case report we encountered the obstacle of attempting to reverse apixaban despite it being held 24 hr prior to surgery as directed by the patient’s cardiologist. All attempts to control the bleeding surgically failed since the source was non-visible. It was not until the patient was administered activated prothrombin complex concentrate (FEIBA) that the bleeding yielded. FEIBA (Factor Eight Inhibitor Bypassing Activity) is a prothrombin complex concentrate (Activated PCC) that was developed as a pro-hemostatic for hemophiliacs.4 It includes factors II, VII, IX, and X that are activated during the manufacturing process. Not surprisingly, its usage has been associated with increased thrombotic events, but primarily in patients with pre-existing thrombotic risk factors.1 When used in an off-label manner, as we did, FEIBA can act as adjuvant therapy when attempting to attenuate a spontaneous surgical bleed in a patient on apixaban since it provides activated factor X. The immediate favorable coagulative response achieved with our patient after a 20-min infusion presents FEIBA as a possibly efficacious therapy for apixaban anticoagulant reversal.

Prevention is always the best therapy. And it is for that reason we would like to discuss a few ways this situation could have been avoided. Firstly, it is important to recognize that a majority of the new oral anticoagulants are dependent on renal excretion.1 Thus, elderly patients and those with decreased renal function should be cautiously managed.5 Extending the duration during which the anticoagulant is discontinued from 24 to 48 hr in this case might have been indicated considering the patient’s age. In addition, a creatinine clearance on the patient could have further necessitated the need for a 48 hr discontinuation.

Although apixaban does not require routine coagulation monitoring, patients with decreased clearance of the anticoagulation should be monitored prior to surgery to ensure stable coagulation. Since apixaban increases the INR, it would seem that the PT test would be the ideal study. Unfortunately, the PT assay lacks the sensitivity of the dilute PT assay (modified PT), which would be a better option.6 An alternative is the HepTest, a commercially available clot-based anti-Factor Xa which is more sensitive than the PT assay, but equally sensitive as the dilute PT to apixaban.6 These assays are possible means for determining the anticoagulation status of at risk patients taking apixaban prior to surgery. Performing these assays on our patient could have revealed him to be still anticoagulated, and thus might have changed our approach to his elective surgery. Monitoring these new oral anticoagulants should be considered in patients undergoing elective surgery that have any predictors of bleeding.

As more patients transition to anticoagulant therapy on these new oral agents, it is important that the anesthesia community be aware of their challenges and understand the interventional options available. Despite following cardiology’s recommendations to hold our patient’s apixaban 24 hr prior to his ENT surgery, we still faced an uncontrollable, diffuse surgical bleed. We acknowledge the lack of clinical data to guide the use of FEIBA for the reversal of apixaban anticoagulation therapy, and therefore cannot recommend its routine use because of the associated thrombosis risks. It is our suggestion that FEIBA should not be used in lieu of careful preoperative preparation or procedural/surgical hemostatic intervention.