Many concerns for patient safety prompt anesthesia professionals to increase the FiO2 level above 30% during surgery. These concerns include adequate oxygenation and prevention of anoxic end organ injuries, increased duration for rescue from an event that decreases oxygenation, and possible prevention of surgical site infections in certain procedures. Most anesthesia providers generally consider oxygen to be strictly beneficial without toxicity except in specific situations such as neonates and post-bleomycin treatment. An increasing number of reports in both the medical literature and the lay press regarding on-patient surgical fires associated with delivery of oxygen and large payment judgments to the plaintiff remind us that oxygen is like any other drug in that its administration should be carefully considered to avoid patient harm. 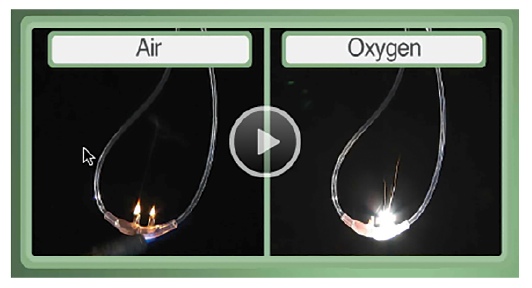 See samples on the effect of oxygen in the Fire
Safety Video in the APSF.org website.

Mr. Thomas indicates the severity of loss varies widely, but severity measured in terms of indemnity reserves and amounts paid are significant including a recent case in Washington State in which a jury awarded $18 million for an intraoperative airway fire.

That case, widely reported in the media, involved a 53-year-old female patient with a history of hoarseness following a prolonged intubation from a previous surgery who presented for laser excision of a vocal cord polyp. The patient was intubated with a cuffed Medtronic laser endotracheal tube filled with saline and methylene blue dye. The anesthesiologist testified she was administering 100% oxygen and had turned away from the surgical field to perform some documentation when the surgeon began the laser procedure. Shortly thereafter an audible “pop” was heard and the surgeon yelled “fire!” The surgeon poured saline into the airway, the anesthesiologist turned off the oxygen and the surgeon pulled the laser tube. The patient experienced thermal burns and significant damage to her trachea, vocal cords and esophagus. Post-operatively the patient required a permanent tracheostomy, feeding tube, and was admitted to a long-term care facility.

The patient sued the surgeon and his practice group, the anesthesiologist and her practice group, the hospital and the laser endotracheal tube manufacturer, Medtronic. The hospital settled with plaintiff for $12 million prior to trial while the remaining parties were unable to reach settlement and proceeded to trial.

Following a 6-week trial, the jury returned a verdict of $18 million allocating 5% of liability to the settling hospital, 52.5% to the anesthesiologist and her practice, and 42.5% to the surgeon and his practice. No award was entered against Medtronic. Following post verdict motions and appeal, the healthcare providers reached a settlement with the plaintiff.

Many nationally renowned institutions as well as smaller hospitals are using cognitive aides such as a question during the timeout procedure, posters in the OR, or smart anesthesia messages (SAM) via the computer as reminders to the OR staff, surgeons, and anesthesia professionals that specific precautions should be used in cases at high risk for fire. It doesn’t require utilization of enormous resources or the latest advanced technology to institute some of these cognitive aides. Smaller institutions can sometimes enact these changes and facilitate awareness of this complication more quickly than larger health care facilities. The APSF in conjunction with other experts has developed an algorithm for preventing on-patient OR fires that is free to download (OR Fire Algorithm Poster 22×28).

Oxygen-air blenders can also help minimize the use of oxygen.2 Commercial blenders are available for purchase, or one can modify the anesthesia circuit for this purpose as described in the Spring-Summer 2012 issue of the APSF Newsletter.3

Minimizing the elements of the triad necessary for on-patient OR fires—oxidizer, fuel, and ignition source—requires participation of every care provider in the OR including nurses, scrub technicians, surgeons, and anesthesia professionals.

Dr. Lorri A. Lee is Co-Editor of the APSF Newsletter, Member of the APSF Executive Committee, and Professor of Anesthesiology and Neurological Surgery at Vanderbilt University in Nashville, TN.