Condensation was noted on the stopper of vials of propofol and inside the flip top cap which raised concerns about the drug’s potential sterility (Figures 1 and 2). Attempts to culture the fluid were unsuccessful due to the rapid evaporation and minimal amount of condensation. Subsequently, we actively looked for evidence of the condensate; however, it was only present in a small minority of cases.

We contacted APP Pharmaceuticals (Schaumburg, IL), which markets the sulfite-free generic propofol and Diprivan®. The manufacturer responded that condensation occurs secondary to the auto-sterilization process and poses no risk to the patient. During terminal sterilization, the vials are subjected to circulating water for injection. As a result, water condensation may be present between the vial’s silicone stopper and the flip cap. The manufacturer further stated that the water evaporates when the flip cap is removed and that this condensate has no impact on the quality or integrity of the product.1 The package inserts for both propofol and Diprivan® recommend that strict aseptic techniques be used in preparing and administering the agents and that vials be disinfected with 70% isopropyl alcohol prior to administration.2,3 However, the package inserts of cistracurium (Nimbex®), succinylcholine chloride (Anectine®), and etomidate (Amidate™) carry no similar recommendation to swab the stopper of the vials (Table 1). 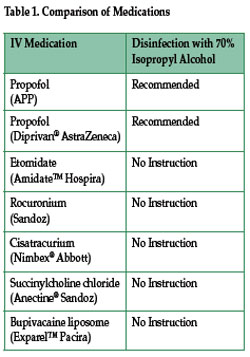 In addition, Exparel™ a new white aqueous suspension of multivesicular liposomes containing bupivacaine may look similar to propofol (Figure 3) also carries no similar recommendation.4 The recommendation to swab the vials of propofol and Diprivan® may be due to its formulation in a white, oil-in-water emulsion. Of note, both propofol and Diprivan® also contain disodium edetate (0.005%) to retard the rate of growth of microorganisms in the event of accidental extrinsic contamination.

Moreover, it is difficult to determine what percent of single dose vials are being swabbed during routine practice of anesthesia. Thus for patient safety, we believe that providers should routinely swab propofol and Diprivan® vials prior to administering these agents and be aware of another drug that may look similar.