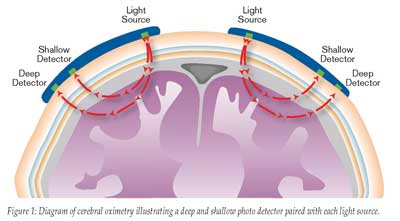 The adequacy of cerebral hemispheric oxygenation can be estimated by sampling oxygen content of blood in the internal jugular vein, but requires the invasive placement of a jugular venous catheter for repeated measurements. Additionally, these data merely reflect global hemispheric oxygenation, exposing the risk of unrecognized regional malperfusion despite adequate global cerebral oxygenation. Commercially available cerebral oximeters estimate regional tissue oxygenation by transcutaneous measurement of areas most vulnerable to changes in oxygen supply and demand (frontal cerebral cortex). These technologies exploit the ability of light to penetrate the skull and determine hemoglobin oxygenation according to the amount of light absorbed by hemoglobin. Cerebral oximetry differs from pulse oximetry by utilizing 2 photo-detectors with each light source, thereby allowing selective sampling of tissue beyond a specified depth beneath the skin. Near-field photo-detection is subtracted from far-field photo-detection to provide selective tissue oxygenation measurement beyond a pre-defined depth (Figure 1).

Cerebral oximetry differs from pulse oximetry in that tissue sampling represents primarily (70-75%) venous, and less (20-25%) arterial blood. Cerebral oximetric monitoring is also not dependent upon pulsatile flow. Regional estimates of cerebral oxygenation in the vulnerable watershed region of the frontal cerebral cortex provide a sensitive method of detecting changes in oxygen delivery due to the limited oxygen reserve of this area. Cerebral oximetric monitoring thus may serve as an “early warning” of decreased oxygen delivery to the rest of the brain and other major organs. These estimates of regional cerebral oximetry may be used to reverse decreasing cerebral perfusion and avert prolonged ischemia of the brain and other major organs by instituting a strategy that optimizes factors that affect cerebral oxygen supply and demand.3 Several recent articles have demonstrated the association between decreased cerebral oximetric measurements and neurocognitive decline, increased major organ morbidity, and increased hospital length of stay (LOS). Interventions utilized to improve regional cerebral oximetry depend on the clinical situation and generally follow less invasive manipulations of physiologic parameters before transfusion of packed red blood cells. These interventions include correction of patient or cannula malpositioning, increasing blood pressure, increasing cardiac output (or cardiopulmonary bypass (CPB) flow) above 2.5 L/m2/min, increasing FiO2, increasing PaCO2 to >40 mmHg (if <40 mmHg) by decreasing minute ventilation (or decreasing oxygenator fresh gas sweep flows during CPB), administering anesthesia and/or muscle relaxants as indicated, and finally administering a red blood cell transfusion if the hematocrit is <20%. 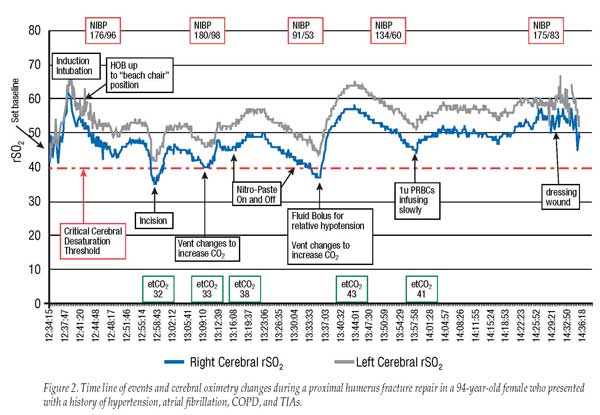 Indeed, a number of recent articles have demonstrated the benefits of cerebral oximetry among patients undergoing both cardiac and non-cardiac surgery. Slater et al. demonstrated the association between intraoperative cerebral oxygen desaturation and an increased risk of cognitive decline and prolonged hospital stay by assessing cognitive function in adult patients undergoing CABG surgery preoperatively, postoperatively, and 3 months after surgery, using a battery of neurocognitive tests. Patients were prospectively randomized to a blinded control group or to an unblinded interventional group. The area under the curve indicating the degree of desaturation below a 50% threshold over time accounted for both the depth and duration of desaturation below this 50% threshold. Patients with rSO2 desaturation score >3,000%-second had a significantly higher risk of early postoperative cognitive decline [p=0.024]. Patients with rSO2 desaturation score >3,000%-second also had a near 3-fold increased risk of prolonged hospital stay (>6 days) [p=0.007].4 Similarly, Yao et al. found a significant correlation between the degree and duration of cerebral oximetry desaturation and early postoperative neuropsychological dysfunction among patients undergoing elective cardiac surgery with CPB.5 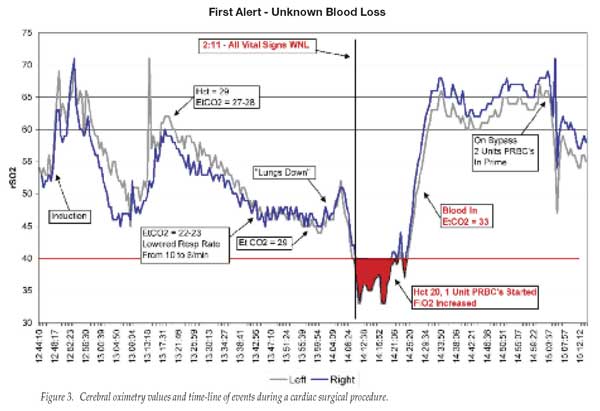 Patients with cerebral desaturation during non-cardiac surgery have also been shown to exhibit declines in their Mini Mental State Examination (MMSE). Casati and colleagues studied 122 patients older than 65 years, scheduled for major abdominal, nonvascular surgery under general anesthesia (with an expected duration >2 hr). Surgical procedures represented by major abdominal surgery with a xiphopubic skin incision included gastric resection, colonic resection, hepatic resection, and duodenocephalo-pancreatectomy. Patients were randomly assigned to an intervention group (the monitor was visible and rSO2 maintained at >75% of pre-induction values) or a control group (the monitor was blinded and anesthesia was managed routinely). There was a significant correlation between the area under the curve of rSO2 <75% of baseline and postoperative decrease in MMSE score from preoperative values. Control group patients with intraoperative cerebral desaturation also experienced a longer time to post-anesthesia care unit (PACU) discharge (47 min [13–56 min]) and hospital LOS (24 days [7–53] days) compared with patients of the treatment group (25 min [15–35 min] and 10 days [7–23ays], respectively; p = 0.01 and p = 0.007).6

Cullen and Kirby reported an unexpected and devastating complication of neurologic injury in this Newsletter, occurring in a healthy 47-year-old woman undergoing shoulder surgery in the “beach chair” position.7 They identified the lack of appreciation of cerebral hypoperfusion that occurs with blood pressure measurement in the non-operative arm that is positioned well below the level of the brain, and the physiologic and anatomic changes that occur with the beach chair position. These can include decreased venous return, vasodilation, and head flexion, which may impede jugular venous flow and thus decrease cerebral perfusion. Deliberate hypotension coincident with these physiologic changes, requires enhanced vigilance on the part of the clinicians caring for these patients. Use of a cerebral oximeter in this setting provides an additional tool in assessing adequate oxygen delivery to vulnerable cerebral tissue.

The clinical studies described above demonstrate the potential benefits of cerebral oximetric monitoring in a variety of clinical situations. Although the vast majority of clinical studies have been conducted among cardiac surgical patients, the application of cerebral oximetry to non-cardiac surgical patients is compelling in certain clinical situations. The previously described work by Casati demonstrated the benefits of using cerebral oximetry among elderly patients undergoing major abdominal surgery.6 The use of intraoperative cerebral regional oxygen saturation monitoring for patients undergoing carotid artery surgery can guide surgical and physiologic intervention in terms of shunt use and blood pressure management, as bilateral measurements are compared with each other and with baseline measurements. An emerging area of cerebral oxygen saturation monitoring is the patient undergoing shoulder surgery in the beach chair position for the reasons described above. Cerebral malperfusion may be unappreciated in this setting, where blood pressure monitoring may not be optimal, head position may impede cerebral venous drainage, and positive pressure ventilation impedes an already compromised decreased venous return to the heart because of the beach chair positioning.

The reduction of major organ morbidity (death, ventilation >48 hr, stroke, myocardial infarction, return for re-exploration) associated with intraoperative cerebral oximetric monitoring in patients undergoing CABG surgery is another very important aspect of cerebral oximetric monitoring. Maintaining an adequate oxygen balance in the most vulnerable watershed tissue of the frontal cerebral cortex apparently provides an “early warning” of decreased oxygen delivery to the rest of the brain and other major organs. Interventions that reverse decreasing cerebral perfusion may avert prolonged ischemia of the brain and thus minimize oxygen desaturation in other major organs (Figure 3). The early warning aspect of cerebral oximetry was further demonstrated by a pediatric study that examined the time to a 5% and 10% reduction in baseline oxygen saturation measurements in 10 children subjected to apnea during laser surgery of their airway. The average time for their pulse oximeter to exhibit a 5% and 10% reduction from pre-apnea levels was 146 ± 49 and 189 ± 64 seconds, respectively, while the cerebral oximeter exhibited an earlier warning of 5% and 10% cerebral desaturation at 94 ± 8 and 138 ± 89 sec, respectively. Cerebral desaturation thus occurred 1 min before the pulse oximeter indicated desaturation among these children.9