As part of its objective to enhance anesthesia patient safety, the APSF has been providing funding for patient safety research since 1987. The grant program started at a time when funding for patient safety research was virtually non-existent. The objective of the grant program was (and still is) to stimulate studies leading to prevention of mortality and morbidity resulting from anesthesia mishaps. Priority is given to studies that address problems affecting relatively healthy patients or studies that are broadly applicable and promise improved methods of patient safety with a defined and direct path to implementation into clinical care. Priority is also given to studies investigating innovative methods of education and training to improve patient safety.

Between 1987 and 2001, a total of 272 researchers applied for funding for 347 patient safety research projects through the APSF Grant Program. An average of 23 projects were reviewed by the APSF Scientific Evaluation Committee annually. APSF funding was restricted to 2-3 grants per year. Over the first 15 years of the APSF Grant Program, 48 projects received funding from the APSF, for a funding rate of approximately 1 in 7 applications. An anonymous survey was sent to all prior applicants who could be located (237). Responses were received from 95 prior applicants (40%), including 33 who received APSF funding (69% response rate), and 84 who did not receive funding (33% response rate). 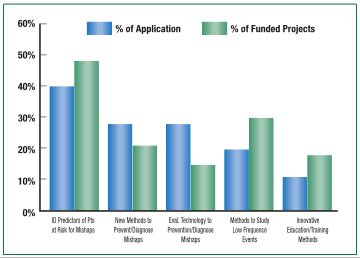 The APSF is meeting its goal of stimulating anesthesia patient safety research. The APSF funded 48 patient safety projects. Nearly all funded studies were completed, with 88% resulting in publications. Two-thirds of grant recipients who responded to the survey indicated that they went on to conduct additional research along the same line of inquiry as their APSF grant. Half received additional funding, totaling over $11 million. There is also evidence that the APSF Grant Program may have stimulated research beyond the projects directly funded by APSF. Nearly half of survey respondents who did not receive APSF funding for their projects went on to complete their projects, with 31% indicating that the APSF application process helped them get started. Most of those applicants still actively conduct anesthesia research. 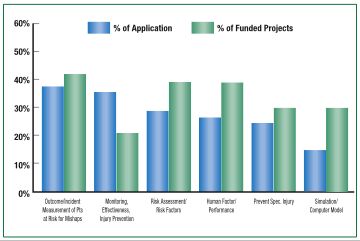 Many projects funded through the APSF Grant Program led to direct improvements in anesthesia patient safety. The APSF Grant Program was instrumental in development of simulators for anesthesia, ACLS, critical care, hemodynamics, sedation, and bioterrorism management. Funding of APSF projects legitimized human factors research in clinical anesthesia, introduced human factors and crisis resource management (CRM) concepts and training in anesthesia and medicine, improved risk analysis methodology and the transfer of these methods to other fields such as trauma care and medical devices, and raised public policy issues regarding sleep and work schedules for residents. APSF funding has influenced device development including anesthesia workstations, ICU ventilators, respiratory monitors, and simulation devices, as well as contributing toward new ways of processing signals and displaying clinical data on monitors. APSF-funded researchers commented on other specific clinical safety contributions resulting from their APSF funded projects. These researchers reported that the APSF Grant Program:

Criticisms of the APSF Grant Program

It is not surprising that few prior APSF Grant Program applicants who did not received APSF funding for their projects responded to the survey. Among the 84 responses were a number of comments indicating areas for improvement in the program. Most comments addressed feedback on applications. Other comments addressed clarity (or lack of clarity) regarding funding priorities and disagreement with APSF priorities or focus.

The most common criticisms of the program concerned feedback on unsuccessful applications. Of the 84 applicants not receiving APSF funding who responded to the survey, 9 received either no feedback on their applications or felt the feedback they did receive was not useful. Other respondents felt the APSF should clarify its research interests and perhaps broaden them. Some applicants felt misunderstood, including applicants who received funding for their projects from other sources.

The APSF Scientific Evaluation Committee has recently revised its grant guidelines to include more information on application scoring. An attempt has been made to improve the quality of feedback provided to unsuccessful applicants. These changes may address some of the criticisms expressed by survey respondents.

Dr. Posner is Vice-Chair of the APSF Scientific Evaluation Committee and is a Research Associate Professor in the Department of Anesthesiology at the University of Washington in Seattle.