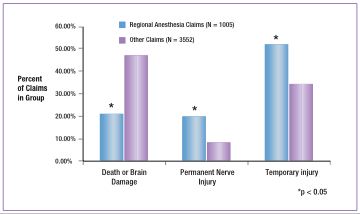 The primary damaging events (mechanism by which the injury occurs) were block-related in 48% of regional anesthesia claims (Table 1). Complication of block technique was the most common damaging event in these claims.

Regional anesthesia claims with death or brain damage were associated with block-related primary damaging events in 49% of cases. Of these events, neuraxial cardiac arrest (i.e., the sudden onset of severe bradycardia or cardiac arrest during neuraxial block with relatively stable hemodynamics preceding the event) was the most common (37%), followed by unintentional intravenous injection (6%), and other block/anesthesia-related events (6%). In death or brain damage claims associated with regional techniques, the breakdown was as follows: 51% spinal blockade, 41% epidural, 2% interscalene block, 1% axillary block, and 5% miscellaneous blocks.

A greater proportion of regional anesthesia claims were associated with permanent nerve injury compared to the other surgical anesthesia group (Figure 1). Lumbosacral nerve root, paraplegia, and median nerve damage were significantly more common in the regional anesthesia group compared to the other surgical anesthesia group. Brachial plexus, ulnar nerve, and femoral/sciatic nerve injuries occurred in a greater proportion of other surgical anesthesia claims compared to regional anesthesia claims. Eighty-four claims of injuries to the neuraxis were identified in the regional anesthesia group, and 36 cases (44%) were associated with hematoma. Outcomes for neuraxial injuries, including hematoma, anterior spinal artery syndrome, spinal cord infarct, and other/unknown causes, were poor and resulted in permanent neurologic damage in the majority of cases. Neuraxial injury caused by herniated discs and infections such as meningitis and abscess demonstrated full recovery in the majority of cases. Vascular surgery was the most common operation associated with hematoma (56%), and coagulopathy was associated with 72% (n = 26) of all hematoma claims. Needle trauma above L1 occurred in 17% of hematoma claims with neuraxial injury. The most common presenting symptom was increased motor block out of proportion to the local anesthetic used (83%), followed by increased sensory block (53%), and back pain (25%). A median delay of 1 day from symptom onset to diagnosis was thought to contribute to the poor neurologic recovery in the majority of hematoma claims. Heightened vigilance for symptoms and signs of epidural hematoma (e.g., increased motor block) and prompt diagnostic work-up and treatment may improve neurologic outcome.

In summary, regional anesthesia accounts for approximately one-fifth of professional liability claims. Most of the injuries from regional anesthesia claims are temporary, and approximately one-half of the temporary claims are associated with obstetrics. High severity injuries continue to result from neuraxial cardiac arrest and neuraxial hematomas associated with coagulopathy. Heightened vigilance and prompt diagnosis and treatment may improve outcome in these cases.

Dr. Lee is an Assistant Professor in the Department of Anesthesiology at the University of Washington, Seattle, WA.