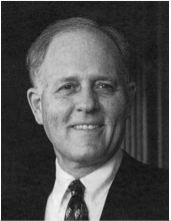 Burton A. Dole, former Vice President of the Anesthesia Patient Safety Foundation, has made yet another important contribution to the APSF. Mr. Dole has designated the APSF to be the recipient of a $200,000 contribution upon the settlement of his estate. This tremendously generous example of planned giving is appreciated by the APSF Executive Committee. Mr. Dole hopes that his gift will serve as an example for others to follow when contemplating estate planning.

Burt was a founding member of the APSF. The Puritan-Bennett company, of which Burt was the CEO at the time, gave the APSF $300,000 in startup funds. The Parker B. Francis Foundation, the charitable arm of the founder of Puritan-Bennett, also gave $300,000 as a founding grant. Burt has served as APSF Treasurer, as well as Vice President, and received the first APSF award for service to this organization in 1997. He retired from the APSF Executive Committee in 2002, but remains on the Board of Directors. His career has been a shining example of a life devoted to helping others and insuring patient safety.