The practice of anesthesia continues to become increasingly complex with the expected standard of care increasingly defined by the skilled use of emerging technologies by appropriately-trained practitioners. This complexity arises from inherent sources such as the variable pathophysiology of patients, the necessary temporal and spatial coordination of practitioners from several disciplines during surgical procedures, and the rapid development of technology through a process we call technological intensification.

We do not oppose innovation and technology. In the hands of skilled healers, technology has the capacity to greatly increase the effectiveness and safety of medical procedures. However, potential risk is often also increased. In this paper we consider the highly topical issue of patient safety in the context of technological intensification.

In recent years much has been made of the analogy between anesthesiology and aviation.1,2 While the adoption of a better safety culture is clearly constructive, it is also important to recognize the limitations of the aviation analogy.3 Like aviation, anesthesiology is increasingly dependent on the skilled use of advanced technology, but the system comprised of an anesthetized patient and the associated technology and people, is typically considerably more complex and more variable than that of an aircraft and typically presents greater challenges to maintaining high levels of safety.4

Systems expert, Charles Perrow, has described the function of any technological or human system along 2 dimensions; interaction and coupling.5 The interaction between the elements of a process or device is considered complex if there are many alternative sub-tasks at any point in its completion, or linear if it is comprised of a set of fixed steps carried out in rigid sequence. The coupling dimension describes the extent to which an action is related to its consequences. A system is said to be tightly coupled if consequences are closely linked to actions. It follows that in tightly coupled systems minor slips can quickly become accidents. In a loosely coupled system, the link between an action and its consequences is less clear, and such systems therefore tend to be more forgiving of error. Together, these 2 dimensions form Perrow’s interaction/coupling space with which technologies can be classified (Figure 1).5
The post office is a relatively safe organization because it is both loosely coupled and has linear interaction between sub-systems (bottom-left quadrant, Figure 1). Hence there are many opportunities to correct any mistakes before a letter is finally delivered to the correct address. A nuclear power plant by comparison is the antithesis of a post-office-like system, being potentially very dangerous because it has both complex interaction and tight coupling between sub-systems (top-right quadrant, Figure 1). As a result, errors in the operation of a nuclear power plant may quickly lead to dangerous outcomes.6,7 Thus, an increase in both the complexity of interaction and tightness of coupling yields more intensified systems; hence, the direction of greater intensification is toward the top-right quadrant of the Perrow space (indicated by A in Figure 1). 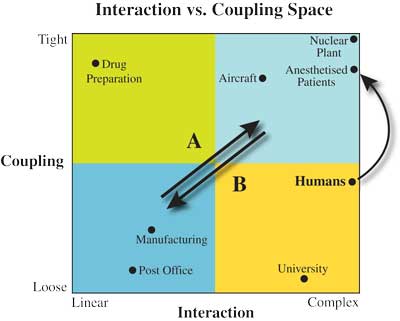 Humans are highly complex and contain a variety of loosely and tightly coupled physiological subsystems, many of which are robustly homeostatic. Therefore on balance humans fall on the “loose” side of the midline of the coupling dimension. However, a patient undergoing anesthesia is a decidedly more tightly-coupled system than an awake individual.1 This is because an anesthetized patient has had the control of a number of normally self-regulating subsystems suspended, altered, or taken over by the technology of the anesthetic. Even our best technology is less reliable and requires much greater oversight than the subsystems of healthy bodies, and so when a healthy patient is anesthetized, the system of which he or she becomes a part, is significantly more tightly coupled for this reason alone. Pathology can greatly diminish the reliability with which the human body responds to the challenges of surgery and anesthesia, and it is the variability of the human condition that leads to the increased complexity that most separates anesthesia from aviation. Some aspects of anesthesia are loosely coupled, but in others (such as the adequate delivery of oxygen to the tissues) the coupling is very tight indeed. Figure 1 shows the migration within the Perrow space, in the direction of greater intensification, when a patient undergoes an anesthetic. In addition, surgery will further increase the complexity of the system and often the tightness of coupling as well by potentially reducing homeostatic reserves through challenges such as blood loss, sympathetic stimulation, and fluid shifts. Timelines for treatment during anesthesia are short, action and reaction are immediate, and several health care disciplines (typically anesthesiology, surgery, and nursing at a minimum, and in cardiac surgery perfusion, as well) must work closely together within a small physical space while simultaneously and independently engaged in the treatment of the same patient. In the cockpit, the pilot and the copilot have similar skill sets and capabilities, and the hierarchy is clear and static. However, in the operating room each of the disciplines has a unique skill set, each set of professionals is entirely dependent on the others for their contribution to the process, and the hierarchy is fluid. The days are gone when a surgeon could reasonably intervene in the provision of anesthesia, and few anesthetists would wish to take over the scalpel if the surgeon appeared to be struggling. Leadership varies dynamically, according to the stage of the procedure and the most pressing issue at any particular time; for example, during an anaphylactic reaction the anesthesiologist is likely to take overall responsibility, whereas the decision to abandon an off pump coronary artery graft procedure and go onto bypass will likely rest with the surgeon. There is, therefore, a lack of redundancy in the system, and greater challenges in communication and coordination. While it is widely recognized that a nuclear power plant is complex and tightly coupled, it is much less well appreciated that an anesthetized patient has similar system characteristics (reflected in the closer proximity of an anesthetized patient to a nuclear plant than to an aircraft in Figure 1).7

A further important source of complexity in anesthesia comes from the rapid development of the technology seen in recent years. Well designed technology can promote de-intensification (movement in direction B, Figure 1), but technological innovation more typically occurs through a process of intensification (movement in direction A, Figure 1), in which desired aspects of a technology are successfully increased or intensified over time. Each new model of a device tends to be more complex, and have more features, capacity, speed, or power than the last. However, the process of adopting iteratively more potent versions of what has gone before can have disadvantages. Increasingly intensified technologies can lead to increased hazards with the potential for unintended outcomes that detract from, or negate, the intended benefits of the innovation itself (“revenge effects”).8 In addition, with successful technology, the number of indications for its use tends to increase, thus exposing more individuals to any risk involved.

Transesophageal echocardiography (TEE) has provided new, rapidly available information and improved management in adult cardiac surgical patients. Indications for intraoperative TEE have increased over the past decade along with improved image resolution. However, TEE has been associated with complications to the gastroesophageal system including esophageal perforation, bleeding and thermal injury, and poor decision making on the basis of misinterpretation of the information obtained.9,10 Distraction from the primary task of vigilant monitoring of the patient may also occur. In a similar way, a generation ago, the Swan-Ganz catheter was widely adopted into cardiac surgical care, before becoming associated with a number of side effects.11 In both cases, increased expertise is required, but the adoption of these technologies has not necessarily been accompanied by appropriate and formalized training.12-15

Rational use of a technology with known complications is the most obvious and probably the simplest approach to increasing patient safety.16 In terms of the Perrow space such an approach de-intensifies the system by effectively pushing the system of the anesthetized patient in the direction of the arrow marked B in Figure 1. However, even this simple approach requires good quality data on which to base estimates of risk. Incident reporting provides an important method of identifying hazards; in anesthesiology and medicine generally, it tends to be poorly used in comparison with other high-technology industries, and often only accidents are reported, and near misses neglected.17,18 For example, the threshold for the reporting of incidents in the nuclear power industry is much lower than in anesthesiology—an accident precursor is reported if it has an estimated probability of as little as 1 in 1 million of causing damage to the reactor.19 Better reporting of near misses in anesthesiology would allow more risks to the patient to be identified before harm occurs.

Incident reports can also be used to identify poorly designed and error-prone aspects of technology, allowing redesign to de-intensify the system. In anesthesiology convincing evidence exists to suggest that systematic approaches to improve the labeling of drugs, color-coding, automated identity checking, and drug layout and organization, can significantly reduce error.1,20-22 These approaches de-intensify the system of drug administration by reducing complexity, improving organization and layout, and through better checking—which provides more opportunities to intercept an incorrect action before an error occurs.
Anesthesiology is an inherently intensified discipline because its activities and technology are both highly complex and tightly coupled. Redesign to de-intensify critical aspects of systems and equipment has underpinned the widely acknowledged gains in patient safety that followed engineering and monitoring solutions to the problem of failing to administer oxygen to patients.23,24 The need for ongoing surveillance through incident reporting is as important today as it ever has been, to address the legacy of poor design which still characterizes some aspects of anesthesia practice (notably IV drug administration17), and to counter the effects of the technological intensification which has tended to characterize progress in this discipline.