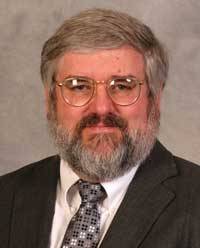 A. William Paulsen, MMSc, PhD, CCE, AAC, the current vice chairman of the Committee on Technology of the APSF, will assume the role of Interim Chair on October 17 during the meeting of the Committee. Dr. Paulsen will serve under the mentorship of the current chairman, Dr. Michael A. Olympio, who will retire from the Committee on Technology and the APSF at the February 6, 2010, meeting of the Executive Committee. Paulsen is a Certified Anesthesiologist Assistant, physiologist, engineer, and biophysiologist and was recently named Dean of the School of Health Professions of South University in Savannah, Georgia. He has been chairman of the Department of Anesthesia Sciences there for many years. He also holds an appointment as clinical professor of anesthesiology with Mercer University School of Medicine and has an impressive background in medical technology issues. Dr. Paulsen’s work with APSF began in 2005, and he quickly rose to vice chairman in September 2007. His primary responsibilities have included the popular Q&A column, where he serves as editor, several technology safety initiatives, and co-direction of several meetings of the Committee on Technology. Recently, Paulsen led the anesthesia machine safety checkout station at the joint SEA-APSF meeting in Seattle. A native of Georgia, Dr. Paulsen was educated at Emory University and the Georgia Institute of Technology, and he received his Doctorate in physiology and biophysics under the famed Arthur Guyton at the University of Mississippi. Along with his formal education and degree in clinical engineering, Dr. Paulsen is well suited to serve as interim chair. His impressive accomplishments and CV may be viewed on the APSF web site at www.apsf.org .

With Dr. Olympio’s planned retirement from the APSF, he and the Executive Committee (EC) have developed an aggressive campaign to recruit the finest and brightest new leadership of the Committee, beginning with Dr. Paulsen’s transitional leadership. Existing and newly recruited members of the Committee, including Dr. Paulsen, will learn more about the specific leadership responsibilities from Dr. Olympio during the October 17 meeting, will continue to receive mentorship, and will have the opportunity of consideration for the chairmanship by the EC during 2010. The new chair position is expected to be named by October 2010.