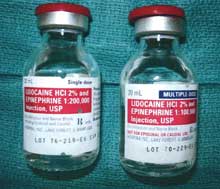 These 2 look-alike medications were found in the labor and delivery suite of our institution where they are used typically for cesarean sections. The primary difference in the medications was the “multiple dose” indication for the lidocaine 2% with epinephrine in the 1:100,000 concentration. The preservative in this vial was methylparaben 1 mg.

Although the manufacturer lists the medications as separate for indications, it is interesting to note that methylparaben as a preservative has not been suggested to be non-toxic when given spinally in small doses.”1,2

A concern over accidental epidural use of the “multiple dose” vial with the methylparaben preservative for epidural analgesia is what initiated this letter. Our hope is that other anesthesiologists and providers will be made of aware of these differences.