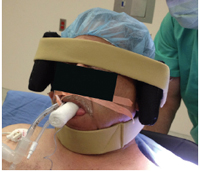 While the incidence is unknown, and probably low, it seems likely that cerebral ischemic injuries occur sporadically in association with shoulder surgery performed in the beach chair position. This sporadic, seemingly idiosyncratic, pattern of occurrence has prompted speculation about mechanisms that might make individual patients especially vulnerable. Might unrecognized hypertension, with attendant right shifting of the autoregulatory curve, or variations of intracranial vascular anatomy render individual patients unexpectedly more vulnerable? As a third possibility, I had also speculated that inadvertent compression of the jugular veins, by the head fixation device, might increase intracranial pressure and effectively reduce cerebral perfusion pressure (cerebral perfusion pressure = mean arterial pressure—intracranial pressure), thereby rendering a mean arterial pressure that would normally be adequate, insufficient. Some time ago, in connection with that latter speculation, I consulted local orthopedic surgeons and closely observed the head holder devices that were then in use at my institutions. My conclusion at that time was that that they appeared to have no potential whatsoever to compress the jugular veins. I put that speculation aside. However, I very recently entered an operating room at our institution and observed a newly acquired head positioning device (SchureMed Linear Motion Shoulder Chair, SchureMed, Braintree, MA) in use. The photograph depicts my observations. Before the surgical procedure began, I loosened the inferior strap (and adjusted the upper strap away from the eyes). After the procedure (a 12-minute skin-to-skin Mumford procedure) I expressed my concern to the orthopedic surgeon, who told me that it was well understood that the inferior strap is to be placed around the chin and not around the neck. That is, in fact, precisely how the device is depicted in the company’s promotional materials (http://schuremed.com/wordpress/wordpress-content/uploads/ 2012/04/2012-Schuremed-Patient-Positioning-Catalog.pdf; accessed 7/18/2012). Nonetheless, there is some potential for malpositioning of the chin restraint, which might be exaggerated by certain body habitus.

I draw this issue to the attention of all practitioners, in particular those who allow permissive hypotension during shoulder procedures, in the hope that clinicians will make every effort to avoid jugular compression, be it by head fixation devices or circumferential ties. My concern is based entirely on speculation as I am unaware of a single instance in which it can be asserted that injury has occurred by this mechanism. However, avoiding jugular compression should entail no physiologic hazard to the patient and should in no way compromise the effectiveness of the beach chair position in achieving the exposure needs of our colleagues in orthopedic surgery.