A middle-aged male was scheduled to undergo neurosurgery, but the procedure was aborted following an unrecognized difficult intubation with minor airway trauma. It was decided to postpone the surgery and upon his return to the OR to electively intubate him via an awake, sedated fiberoptic approach. When he returned for the rescheduled surgery, the anesthesia team was fully prepared and the patient was successfully intubated as planned. Surgery went well, and the patient was uneventfully extubated in the OR and taken to the PACU.

Approximately 24 hours later, the patient had acute neurological deterioration while recovering on the nursing unit. After a stat head CT, he was taken directly to the ICU in preparation for a return to the OR. Due to progressive deterioration, the ICU team decided to intubate the patient; however, they were unaware of his previous airway difficulties. Multiple unsuccessful attempts were made to intubate him by the ICU team. The anesthesia team was then summoned, also without any prior knowledge of the patient’s airway, and was unable to intubate him with the equipment provided in the ICU. The trauma surgeons responded to the crisis and eventually a bedside tracheostomy was performed. The patient was returned to the OR for a clot evacuation but did not recover brain function and expired 2 days later with a presumed diagnosis of anoxic encephalopathy.

Two problems were encountered in caring for this patient:

How to communicate a patient’s difficult airway status such that it is readily available to any health care provider in a health care system with 6 facilities, each of which provide varying levels of service, but in aggregate care for over 40,000 surgical cases/year? The traditional method of notification of a patient’s difficult airway focused on informing only the patient and (perhaps) the anesthesia team (i.e., via a letter to the patient’s home); there was a lack of an organized method to communicate the information to other providers.

To further complicate matters, primary responsibility for intubation of patients outside of the OR rests with non-anesthesia providers such as ED physicians, intensivists, and trauma surgeons.

Additionally, the health care system (at the time of this event) utilized a combination of electronic and paper documentation.

A multi-disciplinary team was assembled to address the problem, chaired by the chief of Anesthesia and including members from nursing, IT, purchasing, respiratory therapy, and physicians from the ED, ICU, and trauma surgery.

The primary goal was to communicate a patient’s difficult airway status to the entire health care team across all 6 hospitals and to ensure that the team has all the necessary equipment readily available in all 6 hospitals.

A nationwide search for best practices was not fruitful. As such, the task force undertook to create the system as described below that focused on identification, communication, and equipment:

A difficult to intubate patient (DTI) is defined as: a patient for whom a conventionally trained laryngoscopist experiences difficulty with mask ventilation, difficulty with tracheal intubation, or both.

Using the above definition, any physician from the departments of Anesthesia, Emergency Medicine, ENT, ICU, and Trauma Surgery may deem a patient a DTI. The physicians do so by writing an order in the chart deeming the patient a DTI.

Upon identification, the focus shifted to the communication method.

Typically, specific information for patients is communicated by placing a sign over the bed or on the whiteboard in each room, such as “NPO for test” or “do not use Right arm for venipuncture.” However, since patients travel throughout the facility for tests and procedures, that would not be sufficient; we needed a method that would remain with the patient constantly. We also wanted this information to be available each and every time the patient was admitted to any of our facilities, without having to search through prior charts.

Upon designation, a blue bracelet, with the verbiage “DIFFICULT TO INTUBATE,” is placed on the patient and remains in place for the duration of the hospitalization.

A notation “DIFFICULT TO INTUBATE” is placed in the allergy section of the electronic health record—this ensures the information is available for subsequent visits to any facility in our system. The DTI designation is treated as an allergy—just as a patient is banded with an allergy bracelet upon admission to the ED or hospital, so too a DTI patient is banded upon their entrance into the health care system.

A letter is sent from the health care system, written in 5th grade language, to the patient for education.

Education about the new process was provided to all staff and physicians in the targeted areas. 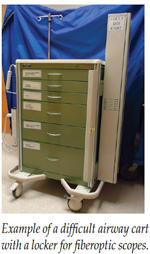 The health care system committed itself, at significant expense, to standardize the difficult airway carts throughout all 6 hospitals including the ORs, EDs, and ICUs. The new standardized DTI carts all have a status identical to a “code” cart—that is the carts at all facilities are stocked identically and when opened are returned to a centralized location to be cleaned or sterilized, restocked, and resealed.

The DTI carts are all stocked with the following (along with other miscellaneous items):

Each of the 6 hospitals, depending on their particular needs, has stocked their facilities with an appropriate number of adult and pediatric DTI carts.

There was significant debate as to whether to also stock the DTI carts with a videolaryngoscope. The physicians on the committee felt that videolaryngoscopy is becoming a primary technique for airway management, particularly outside the OR. Recognizing this new reality, the health care system also committed itself to insuring that all of the facilities have appropriate numbers of videolaryngoscopes, standardized by brand.

Does the protocol work?

The protocol went live on February 1, 2012. Shortly thereafter a patient was admitted to the ER of one of the Memorial hospitals with an acute MI. The patient decompensated and required intubation. The ER physician encountered difficulty and the anesthesia team was asked to assist. Using a videolaryngoscope, they were able to intubate the patient successfully. The ER physician then wrote an order in the chart deeming the patient a “difficult to intubate.”

The patient was emergently transferred to another Memorial hospital for urgent cardiac catheterization. Upon admission, the admitting nurse noted the DTI designation in the allergy section of the patients EMR and placed the blue wristband on the patient (the patient should have had the wristband placed in the ER of the primary institution, but was missed due to the newness of the protocol and urgency of the patient’s condition). The patient underwent cardiac catheterization and was stabilized. After stabilization, the health care team decided that the patient would benefit from surgical revascularization. The patient was subsequently transferred to another Memorial hospital for CABG surgery.

Tracking this patient’s course through our health care system revealed that, on the whole, the protocol works (although we recognize and admit that the patient should have been banded at the initial hospital). In particular:

Sign outside of patient room indicatingthat the patient has a critical airway.

The multiple discussions among the Medical Staff about the protocol and the extensive educational efforts with the nursing staff have raised the level of awareness within the health care system of the risk to patients who may have tenuous airways.

Just recently an infant in the PICU with significant medical conditions and a challenging airway was on mechanical ventilation for respiratory support. In addition to the blue wristband, the ICU nurses undertook to place a sign above the patient’s bed with the verbiage “I have a critical airway” and placed the dedicated pediatric DTI cart outside the patient’s room.

It is our hope that the commitment of the physicians, nurses, and administration of the Memorial health care system to do everything possible to prevent a recurrence of the case that began this protocol will lead to a culture where patient safety in airway management is an important focus of every health care provider.

Joseph Loskove, MD, is Chief of Anesthesia at the Memorial Healthcare System and Memorial Regional Hospital, and the Regional Medical Director for Sheridan Healthcare, Hollywood FL.