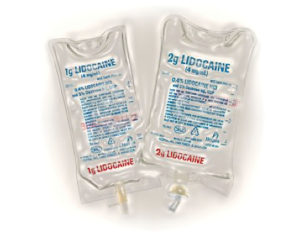 Since its development in 1943, lidocaine has been a versatile medication in the armament of the anesthesia professional. Originally used as an anti-arrhythmic drug, it wasn’t long before its impact on pain was discovered.1 The earliest articles published showing pain reduction came out in the 1960s. Possibly due to the current opioid epidemic or perhaps because of the adoption of early recovery protocols and the concept of multimodal surgical care, lidocaine for analgesia has seen a re-emergence. From use in chronic pain syndromes to open abdominal surgery, lidocaine infusions have been incorporated and found to have positive results with a well-tolerated side effect profile. The antinociceptive properties of systemically administered lidocaine have repeatedly been shown in various experimental and clinical pain conditions.2-5 Some literature suggests that systemic administration of lidocaine may confer anti-metastatic benefits in some cancer patients.6 Studies have shown lidocaine to have a glycine-like action in the central nervous system at plasma levels far below what is required to prevent nerve impulse generation. The role of lidocaine in chronic inflammatory conditions is a much more recent area of research. Changes in expression of sodium-channel isoforms are involved, and lidocaine is believed to have its effect at these sites in the dorsal root ganglion.7 Additionally, lidocaine has been shown to modulate N-methyl-D-aspartate (NMDA) receptors, which could contribute to the prevention of chronic pain states.8,9 The therapeutic index of lidocaine has been investigated by several researchers and found to have optimum effects at 2–10 μg/mL2 and a total duration of 24–48 hours from the start of the infusion. Achieving and maintaining this level can be dependent on patient co-morbidities, age, and other factors that should be considered on a patient-by-patient basis.10

Lidocaine infusions have influenced numerous clinical outcomes investigated by researchers. Terkawi et al. conducted a trial including 216 patients and found lidocaine infusion to be equal with respect to pain scores to epidural analgesia in adults undergoing abdominal or pelvic surgery. They also found lower incidence of postoperative nausea and vomiting, pruritus, and urinary retention. However, the intravenous lidocaine group, receiving 1 mg/kg per hour for up to 96 hours postoperatively did have higher systemic opioid consumption when compared to the epidural analgesia group, who received a combination of 0.125% bupivicaine and 10 micrograms per milliliter of hydromorphone through the epidural.11 It comes as no surprise that thoracic and lumbar epidural analgesia does provide better pain relief at late time points, although studies are showing intravenous (IV) lidocaine to be a great alternative in patients who refuse neuraxial methods or have contraindications and can provide great analgesia up to two days after surgery.11-13

When administering a lidocaine infusion, it is important to discuss this plan with the surgical team prior to administering the infusion as well as to check for any contraindications in each patient (Table 1). Fortunately, lidocaine has a long-proven track record for safety as an IV medication and has been very well tolerated in the trials investigating the efficacy of this method.12,14,15

In 2015, a Cochrane review, which included 45 trials, was published comparing the effect of continuous perioperative lidocaine infusion either with placebo, or no treatment, or with epidural analgesia in adults under general anesthesia. The epidurals contained various solutions of dilute local anesthetics with or without low-dose opioids. The results suggested that the lidocaine infusion group had a reduction in postoperative pain at early and intermediate time points, expedited gastrointestinal recovery time, reduced postoperative nausea/vomiting and opioid usage as well as a reduction in hospital length of stay.16 There was limited data on adverse effects in the studies with the lidocaine intervention. However, most reported events were limited to light-headedness, tinnitus, or headache. There were no serious adverse events reported from these trials or poor surgical outcomes related to the lidocaine infusion reported in the treatment arm of the trials reviewed. Despite the more than 40 trials included in the review, more high-quality evidence is needed to delineate the clinical effect that can be expected with this modality. The Cochrane review concluded that there was low to moderate evidence. The authors also noted a scarcity of studies evaluating optimal dose, adverse effects, and timing, and further research is likely to have an important impact on the confidence in the estimate of effect.16

Herroeder et al. performed a double-blind, randomized, controlled study in 60 patients undergoing colorectal surgery. Their results suggested that with systemic lidocaine (1.5 mg/kg bolus followed by a 2 mg/min infusion), patients were afforded shorter hospital stays and earlier return of bowel function. They were also able to show a measured reduction of a variety of inflammatory cytokines in the systemic lidocaine group.15 This study was able to showcase not only the central analgesic properties of local anesthetics but also the anti-inflammatory properties. This significant reduction in inflammatory mediators has implications in not only return of bowel function and postoperative ileus but also thrombosis, postoperative myocardial infarction, and sepsis.18

At Medstar Georgetown University Hospital, we have eagerly adopted IV lidocaine infusions as part of a balanced anesthetic plan. Several surgeons regularly incorporate IV lidocaine infusions into their perioperative treatment protocols. It is used as a fundamental component of our early recovery protocol in combination with acetaminophen, gabapentin, and celecoxib. This protocol is incorporated into most patients’ care undergoing colorectal surgery19 or, cholecystectomy; however, it has been used successfully in select patients not undergoing abdominal surgery. Patients are evaluated on an individual basis for candidacy of each medication. A thorough history and physical exam are performed to rule out contraindications to lidocaine (Table 1).

During induction, the systemic administration is started with a one-time bolus of 1–1.5 milligrams per kilogram ideal body weight (IBW) after which time an infusion is initiated at 2 milligrams per kilogram per hour (IBW). This rate is continued for the first four hours and then reduced to 1 milligram per kilogram per hour for the remainder of the infusion period. Reducing the infusion rate after the first four hours is an effective and simple method to avoid toxic levels of lidocaine, but maintain a therapeutic concentration for pain control.20 Biotransformation of lidocaine yields metabolites monoethylglycinexlidide (MEGX) and glycine xylidide (GX). The systemic actions of these metabolites are similar to, but less potent than, lidocaine itself and are most pronounced when combined with concomitant administration with lidocaine. Pharmacokinetics of these metabolites can be diminished in individuals with liver cirrhosis21 and has even been developed as a more sensitive index than the Pugh score for liver dysfunction.22

After the patients are brought to the recovery room, our acute pain service takes over the management of the lidocaine infusion. This is an important step in maintaining safety during the infusion period to have early recognition of local anesthetic toxicity. Our staff will monitor patients at least every four hours for lightheadedness or dizziness, visual and auditory disturbances, or metallic taste and are available at all times for any concerns. Unfortunately, our clinical laboratory processes serum lidocaine as a send-out laboratory value, and, therefore, it can take up to three days to obtain a result, which limits its use in clinical practice. Therefore, if our staff recognizes or has suspicion of early signs of toxicity, the infusion is discontinued and the patient is moved to an intermediate care unit for continuous telemetry. Our protocol utilizes the Checklist for Local Anesthetic Systemic Toxicity (LAST) published by the American Society of Regional Anesthesia and Pain Medicine.23 As an additional precaution, the pharmacy will stock 20% IV fat emulsion in the automated medication dispensing system of floors where patients are receiving the infusion for quick access in case of emergency. Because lidocaine levels would not be processed in a clinically useful timeframe, it is important for us to recognize dangerous clinical signs and initiate treatment early. These signs include hypotension, seizure, loss of consciousness, and very late signs can include respiratory arrest and cardiac arrhythmia or arrest.24 If these signs are witnessed or suspected, the acute pain service attending physician is immediately notified and will determine the need for lipid emulsion. To date, we have not had any severe complications using our lidocaine infusion protocol since its implementation in the fall of 2017. Trials published using infusion rates for pain control document very few minor symptoms, which are self-limiting. Patients have noted symptoms including light-headedness, dizziness, tinnitus, or metallic taste in their mouth that resolve soon after discontinuation of the infusion. At this time, we recommend patients be monitored on the floor with continuous pulse oximetry without the need for routine telemetry. The lidocaine infusion is continued for 24 to 48 hours from initiation, as this is in line with the optimal clinical effect reported in most published trials we have investigated.11-15,17,18,25 Our acute pain service will continue to follow up for an additional day to provide an extra layer of patient safety and continue to assist with pain management as needed.

Dr. Bellil is Director of Obstetric Anesthesia, former Director of Acute Pain Service and Assistant Professor in the Department of Anesthesiology at Medstar Georgetown University Hospital.

Neither of the authors have any disclosures relevant to this article.

Special acknowledgment to Dr. David Dickerson, the Director of the Acute Pain Service and Assistant Professor in the Department of Anesthesia & Critical Care at the University of Chicago for serving as guest editor.

The information provided is for safety-related educational purposes only and does not constitute medical or legal advice. Individual or group responses are only commentary, provided for purposes of education or discussion, and are neither statements of advice nor the opinions of APSF. It is not the intention of APSF to provide specific medical or legal advice or to endorse any specific views or recommendations in response to the inquiries posted. In no event shall APSF be responsible or liable, directly or indirectly, for any damage or loss caused or alleged to be caused by or in connection with the reliance on any such information.