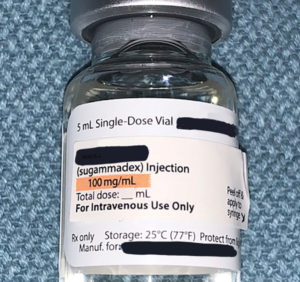 New substances in our pharmaceutical armamentarium occur with reassuring frequency. When they tangibly affect our practice, they can be a tremendous clinical adjunct. While some do not withstand the test of time, others do. Sugammadex is an example of the latter. It gained FDA approval and arrived in the United States (12/2015) much later than in Europe (2008) or Japan (2010), where there are now many years of patient-accumulated experiences using this drug. In this APSF Newsletter issue, Dr. Takazawa and colleagues nicely detail the Japanese experience where it is estimated that up to 10% of the Japanese population has already been exposed to sugammadex.1 With any drug, and especially a new one, there is always an underlying concern of a significant allergic reaction. In point of fact, the FDA delayed approval of sugammadex in the United States several times largely predicated on concerns surrounding hypersensitivity reactions.2

Although most sugammadex hypersensitivity reactions cause mild symptoms such as sneezing, nausea, rash, and urticaria, there is a small but finite risk of anaphylaxis with potentially life-threatening symptoms such as airway edema, bronchospasm, and cardiovascular collapse. Although the mechanism of sugammadex “anaphylaxis” remains unclear, it is encouraging that the risk does not seem to increase with repeated exposure, which is often inevitable with some patients. Interestingly, the risk of hypersensitivity reactions appears to increase with higher doses of the drug.2

As Dr. Takazawa et al. point out through their reported experience in Japan, the actual risk of sugammadex-induced anaphylaxis is very difficult to determine given the information to date. The authors report an incidence ranging from 0.0025% to 0.039%. This is a 15-fold difference depending on the use of data from the Japanese FDA equivalent or reporting from a single center study. As the authors suggest, much of this variability stems from difficulty in recognition, confirmation, and perhaps most importantly voluntary reporting. This voluntary reporting (numerator) that we also have in the United States makes it difficult to accurately estimate the incidence (the reported cases of anaphylaxis/total number of dose-exposed patients). So what do we know? The package insert from Merck and Co. describes an eyebrow-raising incidence of 0.3% hypersensitivity reactions in healthy study volunteers.3 This is many-fold higher than the incidences described by Takazawa et al., and similarly far exceeds our own anecdotal two-year clinical experience. Ultimately, anaphylaxis is a binary event for the patient and the provider—either it happens or it doesn’t.

With antibiotics, muscle relaxants, and latex, we expect and generally see reactions early in an OR case. Unlike these, sugammadex is typically administered at the end of a case. Thus a distinct difference is the timing of the anaphylaxis presentation and vigilance for anaphylaxis that may occur at what is historically an unexpected time for such an event. When sugammadex anaphylaxis happens, it seems to occur within 5 minutes of administration.5 Interestingly, the likelihood of anaphylaxis with sugammadex appears to be dose-related.3 Therefore, it would make sense to use the lowest effective dose to decrease the incidence of anaphylaxis. As an approximate rule of thumb, it requires 4 mg (3.57 mg to be exact) sugammadex to encapsulate/antagonize 1 mg rocuronium; thus a 200-mg reversal dose is adequate for most cases.6

Should significant anaphylaxis to sugammadex occur, the first-line treatment is small boluses of epinephrine titrated to response, followed by an epinephrine infusion when needed.7 As an example, a case from our institution, which was reported to MedWatch, involved an elderly man with previous anaphylaxis to a non-steroidal anti-inflammatory drug. Rocuronium was reversed at the end of the case with 2 mg/kg sugammadex. One minute later, the patient’s blood pressure dropped to a systolic blood pressure in the 40s with accompanied desaturation, skin flushing, and severe bronchospasm. The patient was treated with intravenous epinephrine (three 20-mcg boluses), diphenhydramine (50 mg), dexamethasone (12 mg) and famotidine (20 mg). The patient’s symptoms subsided over 10 minutes, and he was briefly administered a low-dose epinephrine infusion. His tryptase level after the event came back significantly elevated at 74 ng/mL.8 This was the first sugammadex anaphylaxis event in our institution after approximately 4,500 patients had been administered the drug. A second case approximately one year later presented as isolated bronchospasm without cardiovascular collapse and was resolved with two 20-mcg epinephrine boluses. It is encouraging that case reports and personal experience confirm that when sugammadex anaphylaxis occurs, it responds to the usual therapy and that our anecdotal local incidence is < 1:4,000, i.e., < 0.025%.

In summary, anaphylaxis to sugammadex is a potentially high-consequence event that most assuredly happens as described by Takazawa et al. at some unclear but low frequency. It may occur without prior intravenous exposure. Importantly, anaphylaxis appears more likely at higher sugammadex doses, occurs at the end of case (within five minutes of exposure), and responds to standard epinephrine-based anaphylaxis treatment.

Dr. Corda is an Assistant Professor of Anesthesiology and Chief of Multispecialty Anesthesia at the University of Florida.

Neither author has any disclosures as they pertain to the present article.