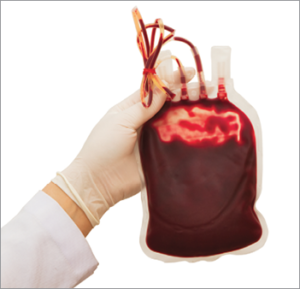 In the past 4 years, 7 cases of cardiac arrest or near-cardiac arrest associated with hyperkalemia during massive transfusion— of which 3 cases were associated wtih hyperkalemia and the remaining 4 cases were suspected of having hyperkalemia—have been reported to Wake Up Safe, a Quality Improvement Initiative of the Society for Pediatric Anesthesia. Wake Up Safe is a Patient Safety Organization that hosts a registry of serious adverse events among the now 25 pediatric hospitals that participate. The case profiles submitted were as follows: an infant undergoing myelomeningocele repair; an infant undergoing resection of an abdominal tumor; a premature neonate undergoing resection of sacrococcygeal teratoma; an infant undergoing sagittal synostectomy for craniosynostosis; a neonate undergoing resection of a facial mass; a child undergoing cardiac surgery with cardiopulmonary bypass support; a teenager in extremis undergoing emergency exploratory laparotomy for free air. In 2 of these patients, the serum potassium levels exceeded 8 mmol/L during transfusion of red blood cells (RBC) that were 21 and 28 days old in 1 patient and 23 days old in the other. In the third case, serum potassium level exceeded 6 mmol/L after transfusion of RBC that were 5 days old.1 In the remaining 4 cases, other comorbid conditions were likely the primary cause of the cardiac arrest or near cardiac arrest, and/or more specific information was unavailable regarding the plasma potassium or units of RBC. Between 1998 and 2004, before the establishment of Wake Up Safe’s registry, the Pediatric Perioperative Cardiac Arrest (POCA) registry received 8 reports of cases in which patients developed hyperkalemic cardiac arrest related to blood transfusion.2

In an editorial, Strauss4 recommended that RBC be infused at 0.5 mL/kg/min in order to avoid hyperkalemia. However, the clinical situation may dictate exceeding this rate. Although massive transfusion in the perioperative setting is often in the context of hypovolemia from blood loss with ensuing fluctuations in hemodynamics and electrolytes, anesthesia providers can take measures to reduce the likelihood of TAHCA. We recommend that anesthesia professionals anticipate blood loss and transfuse before significant hemodynamic compromise occurs. In a hypovolemic, low-cardiac-output state, the body’s ability to redistribute the potassium load present in stored blood is compromised, resulting in clinically significant hyperkalemia. It is hoped that early transfusion will allow for a slower rate of transfusion and prevent the need for rapid infusions. Identifying patients with baseline electrolyte abnormalities or compromised renal function is important as well, based on the patient’s known comorbidities and the type of surgery planned. We recommend that electrolytes be checked and corrected frequently to prevent the metabolic changes, such as hypocalcemia and acidemia, that often accompany massive transfusion. In terms of route, we recommend using peripheral intravenous (IV) catheters rather than central venous lines for massive transfusions. Five of the 9 case reports in our review involved primary transfusion via a central line. Theoretically, peripheral infusion will also allow for a longer redistribution time of the potassium load present in stored RBC before it reaches central circulation and exerts cardiogenic effects. Furthermore, in in vitro studies, larger bore (>23G) peripheral IV catheters were shown to cause less RBC hemolysis than were small-bore IV catheters.5

When massive transfusion is anticipated, a Transfusion Medicine consult is beneficial in determining what the transfusion policy is for the hospital and what effective measures are available to reduce the potassium level in the RBC products dispensed from the Blood Bank, particularly in a scenario where hyperkalemia becomes clinically significant.6One option may be to use “fresh” RBC for massive transfusion; the definition of fresh is arbitrary and often refers to RBC stored less than 7 days after collection. However, these fresh units may be in limited supply or completely unavailable. Depending on the Blood Bank, measures to reduce the potassium level in stored RBC include plasma volume reduction, reduction of additive solution, washing of RBC, and minimization of the time interval between irradiation and transfusion. Again, these measures to process stored RBC take time and are specific to certain institutions. Timely communication among the surgeon, anesthesia professional, and Blood Bank is crucial to prevent any one group from making decisions unilaterally, to optimize the use of available resources, and to minimize the risks for hyperkalemic cardiac arrest in the bleeding patient who requires massive transfusion.

If significant hyperkalemia does occur, some treatment options include the following:1

Most transfusions administered for anemia can be given without concern for TAHCA. However, in the small subset of pediatric patients identified to be at risk, anesthesia professionals should anticipate and prepare for hyperkalemia in the context of massive transfusion.

The authors have no financial conflicts of interest to report for this article.

We thank Don Tyler, MD, for his tireless work as Executive Director of Wake Up Safe. Angela C. Lee, MD, is an Assistant Professor in the Departments of Anesthesiology and Pediatrics at George Washington University Medical Center and serves in the Division of Anesthesiology, Sedation, and Perioperative Medicine, Children’s National Health Systems, Washington, DC. Eugenie S. Heitmiller, MD, is a Professor in the Department of Anesthesiology and Critical Care Medicine at Johns Hopkins University School of Medicine, Baltimore, MD.