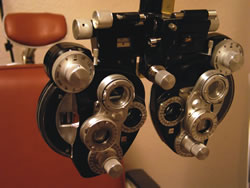 I read with interest the letter in the Fall 2005 issue of the APSF Newsletter from Dr. Okwuone. Corneal abrasions have been the most frequent complication of anesthesia in my practice, and, if anything, the incidence seems to be rising, despite our best efforts to prevent them.

It is difficult for me to imagine why patients, lying supine for short cases, with nothing (other than eyelid tapes) touching their eyes, who have not been ventilated with a mask, should suffer such injuries.
My belief is that a large number of corneal abrasions are self-inflicted, either during or after emergence from general anesthesia. My experience is that many, if not most patients will reach for their faces as they wake up in particular, in order to rub their eyes. We spend a considerable amount of time in the OR, during transport, and in the PACU verbally and physically restraining patients from touching their faces.

Few things are more irritating, both to anesthesiologists and their patients, than to have a corneal abrasion become manifest after an otherwise uncomplicated anesthetic. I personally have on several occasions received a call from the PACU nurse stating, “Mrs. Jones is ready to go home, but one of her eyes is red and hurting.” This an hour after seeing her in PACU with both eyes open (not red), responding appropriately, and denying any discomfort. My guess is that this injury has occurred subsequent to that time, but I am somewhat mystified as to how. I try to watch as the oxygen mask is applied in PACU, since I think that is a potential cause of eye injury, but failing that as the etiology, one must look to the patient.

I don’t have an easy solution to this seeming dilemma. Restraining patients for more than a few minutes is impractical for a variety of reasons, not the least of which is medicolegal. Eye ointment, as noted by Dr. Okuone, is usually of dubious value and involves some minor drawbacks of its own—blurry vision, risk of transmitting infection, and the occasional allergic reaction. I would be very interested to hear the views of other anesthesiologists on this subject.

Please allow me to commend Celestive O. Okwuone, MD, for his letter to the editor on “Anesthesia May Predispose Patients to Corneal Abrasions” in the fall 2005 issue of the APSF Newsletter.

As he points out the exact mechanisms of the injury to the cornea is unknown, but it is our duty as anesthesiologists to use all precautions to prevent it.

I share Dr. Okwuone’s concern regarding the potential for corneal injury in the perioperative period. I would add 2 more possible mechanisms of injury. During surgery involving the head or neck in which the eyes are draped, it is possible for the surgeon or assistant to put continuous pressure on the cornea by inadvertently resting an arm on the eye. Another period of vulnerability occurs before or after transport to the PACU when the plastic oxygen mask is placed on the patient’s face and can easily pull the eyelid up, scratching the cornea.