The panel commented on documented causes and effects (summarized in Table 1) of perioperative hypothermia. The panel’s concerns included:

The Unavoidable Chilling Effect of General and Regional Anesthesia during Surgery

Physiologic temperature regulation in warm-blooded animals is intricately controlled by relying upon the autonomic and somatic nervous systems’ ability to sense changes in ambient temperature, and within a narrow threshold, respond appropriately to maintain core body temperature in the normothermic range between 36°C and 38°C.

Induction of either general or regional anesthesia impairs thermoregulation, allowing a redistribution of heat from the central compartment of the body (consisting primarily of the major organs) to the periphery. In addition, heat is lost to the cold OR environment over time, furthering the heat deficit that will ultimately be repaid postoperatively.

The Consequences of Perioperative Hypothermia

Very young, very old, and very sick patients are more likely to become hypothermic during anesthesia and surgery regardless of procedure. Additionally, certain procedures exacerbate perioperative hypothermia by their length or field exposure alone. The systemic changes indicated in the table have been noted to occur even as little as 0.5°C below the normothermic range. Members of the panel believed these effects are under-appreciated by the general medical and surgical community, believed the severity of damage increased in tandem with the degree of hypothermia, and discussed some of the reasons for this as well as some solutions.

Panelists noted that despite the importance of normothermia for surgical outcomes, there persists an inter- and intra-institutional inconsistency. Some institutions uniformly strive for normothermia, and consistently monitor core temperature, while others may not even monitor as much as 40% of their patients. Panelists spotlighted several reasons for this inconsistency, including the following:

Staff turnover contributes to inconsistent practice patterns because a trained constituency for strict attention to practice patterns for maintaining normothermia may dissolve as staff moves to new locations or even just new areas of interest.

Technical factors especially concerning the measurement of core temperature may impair the clinician’s ability to accurately determine a thermal target. The appropriate sites for measuring core temperature are the esophagus, nasopharynx, tympanic membrane (using an appropriately placed thermocouple), and pulmonary artery. Many of these sites are unavailable during different types of cases. Of note, the bladder temperature may accurately reflect other core temperatures, but in conditions of low urine flow may be as unreliable as rectal temperature. Relying on patient reports of comfort during neuraxial anesthesia when they are equally vulnerable to hypothermia is frustrated because patients’ sensation of hypothermia may be completely disrupted, and they may report comfort when in fact they are becoming hypothermic.

Lack of evidence-based guidelines on how best to warm patients results in practice guidelines (especially ASA standards), which are general and non-specific. Clinicians are given maximum clinical flexibility, but little guidance about which technique may prove successful in particular situations. Practice guidelines are in many cases more helpful than standards because they are specific enough to overcome institutional and personal practice based on tradition and convenience.

The benefits of warming may not be immediately apparent. Compared with using a drug or performing surgery, the results of warming may be relatively delayed. Unlike giving a drug and observing an immediate response, changes in core body temperature occur very slowly because of the energy flow to and from the body during heat transfer. When core temperature falls early in a procedure, despite active warming, clinicians doubt the effectiveness of the intervention. Also, each patient and procedure is different enough to be an “experiment of one” whereby the clinician does not know whether a different modality would have a better result in the particular patient.

The appropriate stakeholder may not make decisions about what happens in the OR. Decisions about adopting warming technology may be made at an institutional level where the benefits of normothermia may not be the primary concern. Also, there may be unintentional “turf battles” about who controls the treatment of certain complications (e.g., wound infections) whose inception in the hypothermic intraoperative period may be hidden to observers of the problem at a remote time. Education and closer cooperation is essential. Communication and feedback from colleagues may be fragmented, such as the lack of reporting wound infections to the anesthesiology area, or the lack of communicating temperature information to surgery area.

Some patients are just difficult to warm. During spinal surgery, the patient is excessively exposed to the cold OR environment with little available area for attaching warming devices. Similar problems occur in some major cardiac and vascular procedures where, in addition, active warming of poorly perfused lower extremities (including during aortic cross-clamping) is proscribed. Trauma patients undergoing multiple operations by several surgical teams at the same time represent another such problem group.

Safety considerations include hyperthermia and burns. Adult patients warmed by forced air are unlikely to become seriously hyperthermic because they can still sweat. In children and infants, this method is less effective due to a relatively larger surface to absorb heat. Burns from forced air devices have been reported when the delivery hose has been used without an appropriate blanket. Circulating-water garments and pad devices have more effective heat transfer, and therefore are provided with a servo control to prevent hyperthermia.

One member of the panel suggested that 30 minutes of pre-warming would keep patients normothermic during 2 subsequent hours of surgery without further active measures being taken. Others noted that at least the initial drop in temperature is lessened in the pre-warmed patient so that intraoperative rewarming does not take so long. No intervention can counteract the redistribution of heat from the core to the periphery during the initial phase of hypothermia. Even forced air warming during the first hour or so can only affect the peripheral compartment, having no effect on core temperature. It is only after the periphery is warm that the total body heat content increases enough to begin warming the core. Pre-warming as much as 30 minutes outside the OR or during pre-anesthesia procedures such as starting lines could preclude the need for intraoperative warming in short cases, and could markedly improve the effectiveness of warming during longer ones.

Passive warming by insulating to the maximum extent possible all exposed skin surfaces can reduce radiant and convective heat loss by approximately 30%. All the common materials usually employed are equally effective, but the benefit drops off greatly after the first layer. Seventy percent of the heat loss and all of the heat redistribution must be dealt with actively.

Active warming involves the use of a device that can both prevent heat loss (insulating the surface, but also warming the skin to reduce the gradient for radiant heat loss) while also providing a net positive thermal flux from the device to the patient, thereby increasing the total heat content of the body and warming the core. Active warming with forced air is inexpensive, safe, and far more effective in several studies than passive warming. Although the heat capacity of air is low, forced air devices are effective because the air is dispersed over a wide surface area. There is no demonstrated difference in effectiveness between brands of forced air systems.

Heat transfer from advanced technology circulating-water devices can be up to 5 times greater than air per unit area. This accounts for their usage in surgical cases where body surface is at a premium and satisfactory results are difficult to achieve with forced-air.

Summarizing, roundtable participants agreed that evidence-based practice guidelines could, where implemented, result in widespread measurement of core temperature and the use of active warming devices in all types of cases where anesthesia induced hypothermia occurs. This could, in fact, go a long way toward the goal of normothermia for every patient, reducing the attendant consequences. 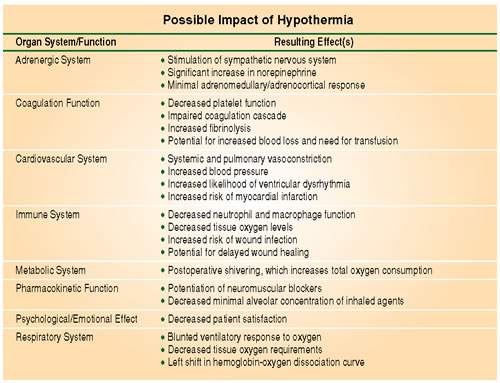