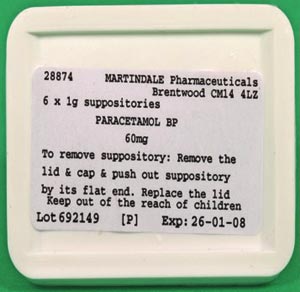 Figure1. Drug labeling on the reverse.

Drug errors are common. We would like to report a drug labeling error that occurred in our department.

A pediatric patient was scheduled for an elective plastics operation for which rectal paracetamol was to be part of the analgesic regime. On being handed this product by the operating department practitioner, we discovered from its labeling (Figure 1) that it was out-of-date.

The labeling firstly showed that it was out-of-date. Also more importantly, the actual drug dosage contained in the suppositories was ambiguous. Was it 60 mg or 1 g? Subsequent correspondence with the manufacturers revealed that this product may contain chloral hydrate and not, in fact, paracetamol. The drug was immediately withheld and the error reported. We are subsequently awaiting the results of analysis by the company.

We would like to raise awareness among our colleagues of the potential problems of drug labeling. In the UK, 1 in 10 patients is on the receiving end of accidents or errors, which are estimated to contribute to 72,000 deaths annually. Further, of the 900,000 medical mistakes made annually, less than a third are being reported.1

The literature suggests 2 schools of thought on product identification. One is that the drug should be distinguishable by appearance.2 With many similar sized and shaped suppositories on the market this may be difficult, and therefore current opinion informs us that the only way to be sure of content is to read the label.3

Our case demonstrates the worst possible scenario: a wrongly labelled and ambiguous drug. The authors therefore recommend that mistakes can be reduced by careful reading of product labels and reporting any anomalies found. Further, while these techniques may help to reduce human error, they need to work hand-in-hand with anesthetic drug awareness, a term recently coined as pharmacovigilence. Only then can we safely clarify drug products and avoid drug error confusion.